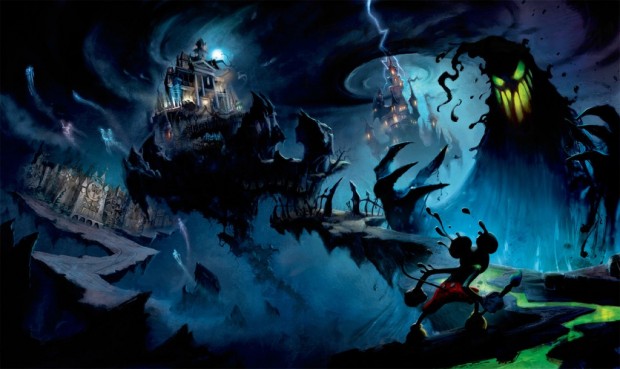 I'm sorry, animatronic version of Donald, but I couldn't put you back together. I know it's unfair to you that I put animatronic Goofy back together instead, but if it's any consolation, I didn't put Daisy back together either. And not just because I couldn't figure out where her pieces were – I just didn't like her. So, my condolences for your extended stay inside a glass-covered pedestal for however longer.

In my defense, though, by the time I got around to the part where I'm supposed to put you back together, I was already fed up with Epic Mickey, the game you're in. Having to find your pieces would've just added to the monotony of the rest of the game. You were the third in a series of quests to put a robot together, and I'm pretty sure your quest would've involved the same amount of exploration as the other two. I lost interest in the collective fates of the animatronics around the time I couldn't find the third of piece of Daisy. So blame her if you have to. I know I do.

And those are just the side quests. The main quest in Epic Mickey involves so much lock and key that I wouldn't have been surprised if you had burst into one of your trademark tantrums even as early as the second or third world. Your uncle Scrooge McDuck would've felt right at home in the world Oswald created; no ones wants to do anything pro bono, so I ended going through several quests that involved regression after regression. I had to fetch medals to get books to get sparks to power a machine (or some combination like that) even though that machine helped save these people's entire world. It got old really quick, and it dampened my enjoyment of the world I was trying to save.

Speaking of which, Oswald, excellent job on the visual design of the world. Picking up the pieces of a world that Mickey destroyed and coming up with places like Mickeyjunk Mountain must have been a grueling task, and I commend you for it. Your love of the Disney lore of old can be seen and felt throughout the entire game. Your commitment to the long-forgotten characters of the Wasteland is endearing, and your role in the the game's dark and emotional plot helped me see it through. And those animated scenes, though short, were also a good move. 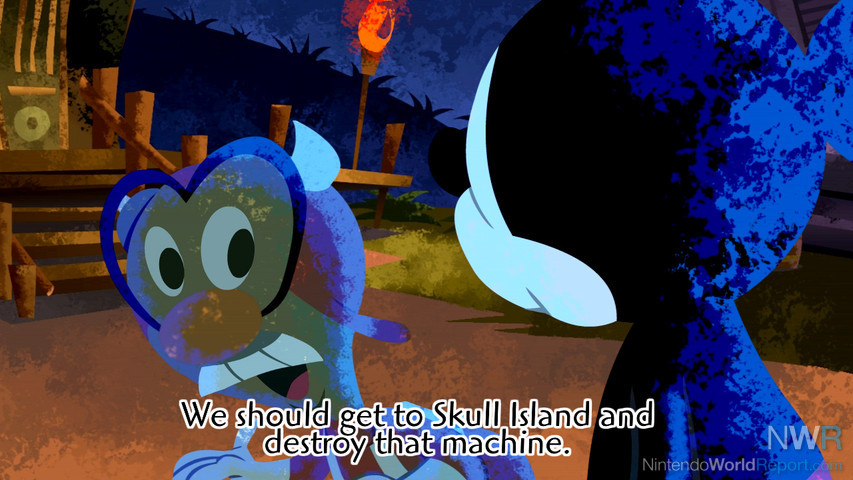 Epic Mickey borrows its art style from more than one era of the mouse's history.

No, I don't blame you, Oswald, I blame your conspirators, your architects, and your below-the-line workers. Getting from anywhere to anywhere else is an absolute chore. Between the monotonous tasks I had to go through just to get to where I needed to in order to progress, every lock requires some combination hitting switches, finding keys, further negotiating with denizens, and fighting enemies to open doors. Your world is inspired, sure, but it getting around in it isn't easy. When the clue to where I should go doesn't appear in front of my face in a cutscene, it's non-existent. You haven't been outside the Wasteland in long time, and it shows; this game feels like it's from another decade. No, that's not a good thing. Your world makes it difficult to do my job properly and it also isn't wheelchair accessible.

You also need to have a serious conversation with the cameraman filming Mickey as well; he gets in the way more than he helps. Using the Wii remote's d-pad might be the slowest way to handle him, and he clearly has not learned the rule of thirds (something your city planners have learned in spades) nor has he figured the best angle to let me see where I should be going.

Letting Mickey play around with paint doesn't work as well as you intended, either. It's interesting at first, but because everything you can paint and thin out is predetermined, the creative aspects of painting are entirely lost. Either a house needs to be covered in paint, to please someone, or it needs to be thinned out so you can grab something inside it. And because your workers didn’t finish their jobs, I also had to paint quite a few platforms so I could jump on them. 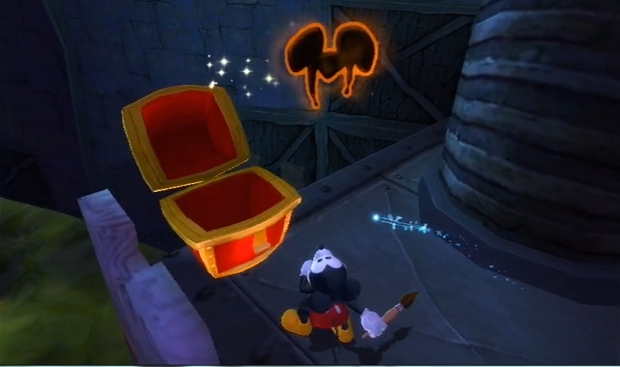 (Right: I still have no idea what those medals are supposed to do.)

The paint also plays into how everyone sees Mickey, and no doubt you wanted everyone to hate him, what with him having stolen your thunder and all. But, whether everyone ends up loving Mickey or hating him is so binary that it feels like a last-minute inclusion even though I'm pretty sure it was a big part of your plan. There are a few key points where choice does matter, such as where saving certain characters from cages will make later parts of the game easier, but at that point, why wouldn't I want to help everyone? Certain characters and quests will play out differently depending on whether I decide to help or hinder some people, but because I know that paint helps and thinner does not, the whole choice thing feels pointless. It also doesn't help that my choices ultimately add up to a few quick scenes during the closing ceremonies of the game.

Which brings me to my last, and most awkward point to make; I don't ever want to visit the world you've made ever again. Even before the halfway point of my nine-hour journey I wanted to leave. Between your self-serving citizens, your lack of foresight in your creative design, and your fumbling technical issues, traversing the areas you've worked so hard to build became so boring that I wanted to erase the day stamp on the back of my hand and go home. Your pointless – and numerous – collectibles, aside from watching two classic cartoons, didn't do much to help keep me there either.

So while my history with Disney wanted me to love what you've done, I need to tell you this: sorry Oswald, but your game just isn't any good. Please help Donald find those other parts of him without me.