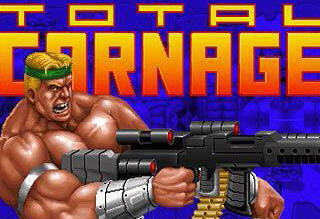 Tonight I would like to talk about a game that was Midway’s (RIP) lousy attempt at copying the formula of Konami’s successful platform shooter, Contra. This is the 1991 Arcade shooter, Total Carnage.

The year is 1999 and the world is thrown into a state of absolute chaos (or dare I say carnage?), after a massive war has nearly destroyed the entire planet. A Middle-Eastern dictator known as General Akhboob (not at all racist) plans on taking advantage of the situation by dominating the world with his army of mutants. The United States becomes aware of this after several journalists flocked to Akhboob’s country to expose his evil schemes. The U.S. decides to launch a counter strike by calling in General Carnage and Major Mayhem (The Doomsday Squad) to invade the country and rescue the journalists who have now been kidnapped by Akhboob, as well as to bring him to justice.

The plot is pretty stupid and even reeks of Contra with the concept of two soldiers coming into a foreign land to do battle with monsters. But to be fair, the game is aware of its own stupidity and even uses the cutscenes for some decent bits of self-parody. 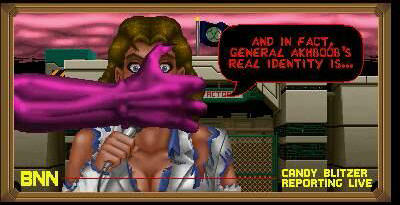 (She has quite the ironic name, considering what is about to happen)

Normally, I don’t talk about this so early on in the review, but I figure that since there really isn’t much worth talking about in this respect, I should get it out of the way now. The sound quality isn’t overly terrific. Nothing memorable about the soundtrack comes to mind, and the sound effects work well enough. I will say that even though the voice-over work isn’t very good because it is composed of overly-digitized sound samples, it still has kind of a campy charm to it and provides a few good chuckles.

Total Carnage actually has a pretty good look for its time, with some nice graphics that appear to be 32-Bit. The monsters and enemy troops look great in an amusingly weird way. Some troops look ludicrously buff, while others look like they were taken straight out of the original Battle Star Galatica. The monsters can range from giant spiders and their bouncing eggs to things that Gary Busey would see in his nightmares (the bosses especially). Although the hostages look rather stock in comparison to the other characters.

Before we end this little discussion about the game’s art direction, I should address the elephant in the room. Yes. Both General Carnage and Major Mayhem are clearly made to resemble the commandos from the Contra series. Although they are a tad more muscular and their over abundance of testosterone is played up for laughs during the cutscenes, so it can be argued that they are parodies, if they were in fact meant to resemble the characters of Contra (which they likely were). Oh and speaking of Contra, Total Carnage also seems to have taken cues from Konami’s shooter platformers, since the levels in this game are all jungle areas and military bases.

Unfortunately, gameplay wise, Total Carnage does not resemble Contra. Instead of playing like a sidescrolling shooter with platfornimg elements, it plays more like a mediocre shoot-em-up. You take control of General Carnage as he works his way through the jungles of where ever the hell he is to reach Akhboob’s main base. Along the way, he will walk around each level, blasting enemies to pieces (literally), slaughtering massive mutant bosses and rescuing hostages. Sounds good. Mostly violent. But good none the less. However, that isn’t to say that it is without its flaws. First off, although you are allowed to go in any direction you please, the screen is going to push you in the direction you are supposed to go. This is annoying considering that it can push you to the other side of the screen as you are trying to collect power ups, keys (we’ll get to these later) and rescue hostages. Not to mention with the screen pushing you, it can be hard to dodge oncoming vehicles. Secondly, there are way too many enemies on the screen. At times, the screen is cluttered with rival soldiers and evil mutants. So, if you haven’t guessed it by now, this game was designed to be a quarter sucker. Sure you can collect power ups to help blast away the enemy hordes but they only last for a few seconds, leaving you with the regular gun which quite frankly sucks. If you happen to play this at the arcade without a second player to watch your back, you are going to need a fairly big bag of quarters if you plan on making it to the end–you are constantly going to get blown away by enemy fire. 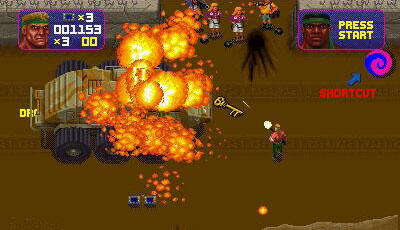 (All this action is less exciting than it looks)

My third compliant is the fact that the bosses take so damn long to kill. I mean there are only three, maybe four bosses in the game, so they had to be a challenge and I’m cool with that. But there is a difference between a fair and competitive challenge and this. I can spend anywhere between five and ten minutes on the first boss alone, just shooting at him and shooting at him, with barley any effect because the power ups keep running out too quickly. Having to use a weak weapon to kill a boss with a hugeass supply of hit points isn’t a fair challenge. It is just irritating. Especially when you have little room to dodge. 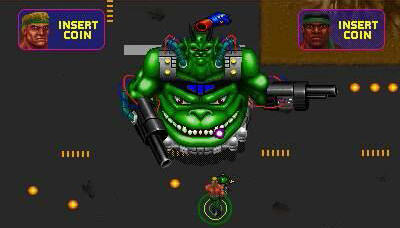 (Have fun trying to kill this thing.What ever it is supposed to be.)

My last complaint is that you have collect over two hundred keys that are scattered throughout the game in order to see the real ending. Why? Because you need them in order enter a place called The Pleasure Palace, which is filled with cash, prizes, and women. So, basically this is every stereotypical male’s dream. However, since these keys are hidden in spots that are hard to notice because the damn screen keeps pushing you around, which makes finding the needed amount damn near impossible (I have played through the game multiple times and have never been able to do it). Basically, you kill the evil dictator, render his army useless and blow his creepy green whatcamacallit and purple people eater into tiny bits and you are rewarded with an end credits screen that essentially tells you that you are shit out of luck. Wow. Just imagine how pissed you would be to get that ending if you were playing it at the arcade.

To the game’s credit, I will say that the control scheme works fairly well. The D-Pad is used to move your character and the X,Y,B,A buttons are used to fire your weapon, with each of them firing in a different direction. I can also say that the violence in the game is gory and over the top–it's hilarious. It is a fairly decent way to kill an hour if you don't have any alternatives. 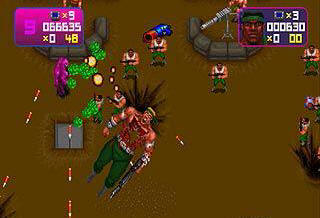 I know that this is nowhere near the best shoot-em-up available, but it has a certain charm to it thanks to its sense of humor, insane level of violence and likeness to Contra. Just be sure to play to a port of the game, since playing the arcade cabinet would result in the loss of so many quarters that could be put to better use. Like, say, Street Fighter III or Metal Slug IV. Or laundry if you happen to be out of clean clothes.