For those who have been keeping up with the news of the world of Downloadable Content, you have likely already heard of the Xbox Live Indie Games: Winter Uprising promotion. But for those who don’t here is a little background info. Some of the best developers within the XBLIG spectrum have had enough with all of the lame apps and crappy cash in clones that have flooded the marketplace and have decided to launch their own campaign that would give XBLA’s Summer of Arcade a run for it’s money. Xbox Live Indie Games: Winter Uprising was originally intended to offer up 14 of the best games to ever hit the Indie Games service throughout the first week of December. Unfortunately, this didn’t necessarily happen. Only nine of the 14 games were launched during this time, with the other five having to be pushed back because of bugs that were found during last minute tests or because of the seven-day processing period standard of submitting indie games. Sadly the games that didn’t launch on schedule will be delayed until at least January but I have to respect developers that are unwilling to allow their games to be purchased until all of the bugs are fixed since there are a few mainstream developers that don’t always do this. This is a review of one of the games that met its target release date.

Tonight I bring to your attention a retro style shmup in the vein of Space Invaders, created by Canadian developer and 2010 Dream Play Build Finalist (1st place Canada, 5th place World) Xona Games. Xona prides itself for providing an experience that can only be described as “Intense Retro.” Does Xona’s Winter Uprising release, Decimation X3 offer up an intensified retro experience? Well, let’s grab a bottle of Shasta, pop in our Best of Rush mix tapes and find out. 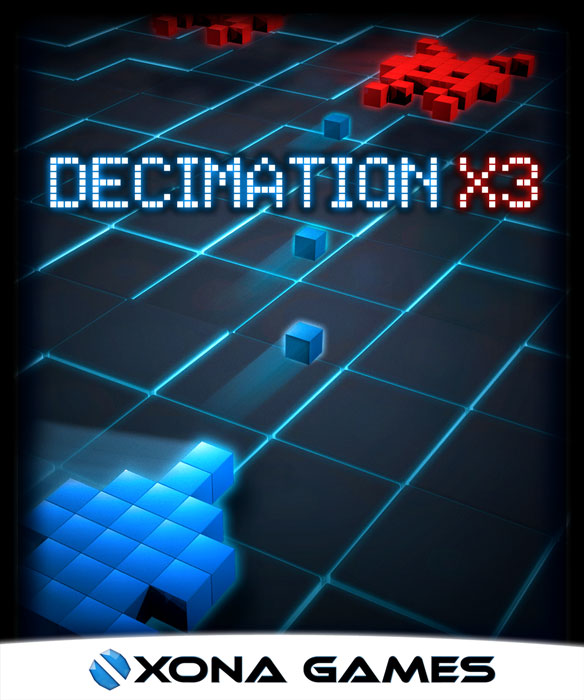 First off, let’s talk about the graphics. Just like in the two previous installments (the second being a Window’s Phone 7 exclusive), Decimation X3’s presentation has clearly drawn influence from old school systems like the Atari 2600. The designs of the enemy ships seem to be inspired by the Atari’s more primative sprites in the sense that the ships barely resemble what they are supposed to be, which means that players will be required to use their imaginations. These sprites also have the same HD polish as seen in the previous titles in series to bring it up to a more modern standard. However, there are some differences in presentation this time around. First off, the HD visuals have been given a bit of an upgrade. The game is brighter, more colourful and the sprites are more diverse and refined as well. I actually really like the wide variety of enemy ships that are featured this time around, as they can range from the more traditional space ship sprite to some really strange mechanical designs like grinding gears and rotating wheels to weird unnameable things that look more organic like spinning worm things and Technicolor jellyfish. Another thing that I happen to find really cool is that the ships that are controlled by the players have also been given a nice graphical upgrade. Instead of looking like a thin little rectangle with a tiny square on top, they actually look like a slightly more primitive version of the ship from Galaga, which is a nice touch. Before I bring this little discussion about graphics to a close, I should say that Decimation X3 is an absolute explosion of colour. The combination of player and enemy crossfire, glowing power ups and exploding ships mashed together on a black background, makes for one Hell of a glorious fireworks display!

Sound wise, it is pretty much the same as the first two outings. The old school sound effects are back, which again is awesome. And the games soundtrack consists of a remixed version of the tunes that Imphenzia Music created for the first game. Their techno beats still adds a nice touch to the game’s atmosphere and adrenaline rush.

Gameplay wise, Decimation X3 is an obvious homage to games like Space Invaders but with a few new twists and turns that offers a greater amount of depth to the mechanics, which are pulled off flawlessly. In typical Space Invaders fashion, the enemy fleets will fly across the screen as they fire downwards in an attempt at blowing up your ship, while they increase in speed and scroll down the screen. As the levels progress, the ships will do the same thing but will gradually increase in speed after you complete each round. You know the drill. 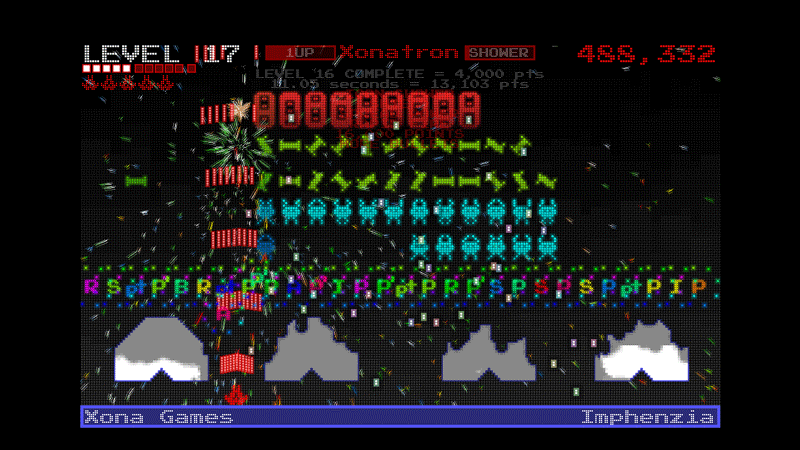 (Feast your eyes on this bullet storm!)

Yes. These gameplay elements of Space Invaders can be found in each entry in the Decimation X franchise. However, the series expands upon these elements. For instance, enemies do more than merely get faster with each level. They will also drastically change their flight and attack patterns as they fire in all directions, forcing you to change your strategy as you progress through the levels. They can even change their patterns midway through the level in some cases so be sure to always be on your guard.

The screen will be cluttered with enemy bullets but don’t worry. There will be a hearty supply of Contra style power ups to help you take out the alien war ships. Power ups like rapid fire, the ability to shot off multiple streams of ammo at one time, shields that are spread out across the screen (these shields were also in Space Invaders) and a force field that will give you temporary invincibility. The best thing about these power ups is that you will still have them after you loose a life. Well, obviously not the force field and the shields eventually do get blown to pieces by enemy fire but you get the idea.

Not to mention, the game also features 4-player co-op! So, if you want to rally up an army to fight off the alien scourge, invite three of your friends over to your place and let em raise Hell! 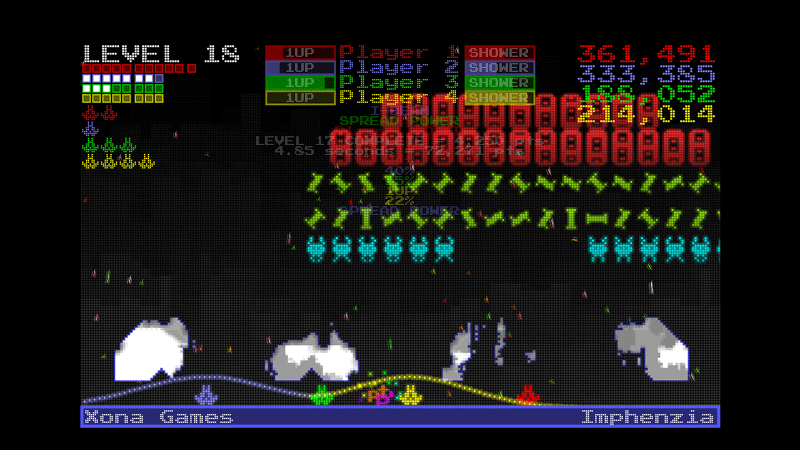 (Who will get the highest score?)

Decimation X3 also has two firsts for the series. The first, being that it features two play modes. Normal Mode is the basic game with all of the power ups in tact. Challenge Mode on the other hand takes away the shields, which means there is nothing protecting you from the onslaught of enemy fire. I actually happen to find Challenge Mode to be the easier of the two. Why? Because the shields can actually block your targets and can also give you a false sense of security as enemy fire can not only blast through them rather quickly but the shattered pixels of the shields and the pixels of the enemy rounds are actually the same colour. Not too mention that the shields are rather big and can be a bit distracting. So, your noob security blanket can actually be more like a cleverly devious beginner’s trap.

The other new addition to the Decimation X series is the inclusion of boss battles. These bosses appear during every fourth level and they are basically giant mother ships, that boast a large amount of fire power and can take a good deal of damage. These boss battles are an unexpected and definitely welcome addition to the franchise, as they really do add to the game’s challenge, as well as adding an extra adrenaline rush. The only real bit of advise I can give you is to destroy them as soon as possible, because their ammo can rain down on you like a hurricane, which makes dodging one Hell of a challenge if the ship happens to reach the bottom of the screen.

The game is hard but fair. The simple and perfectly responsive control scheme allows players to control their ship with either the left or the right thumb stick, so they can swap if their thumbs get tired. They can also hold down any of the A, Y, B, X buttons to fire their weapon, so they don’t have to worry about cramping their fingers.

I know that the screen can get really cluttered with bullets but the colour scheme makes it incredibly easy for the player to be able to distinguish the differences between their bullets and those of the enemy. Dodging enemy fire can be very challenging but there are plenty of different openings in which the player can take advantage of to get out of harms way. But they will have to use a little bit of creativity and quick thinking. It really is too bad that more modern games refuse to provide gamers with this level of challenge. 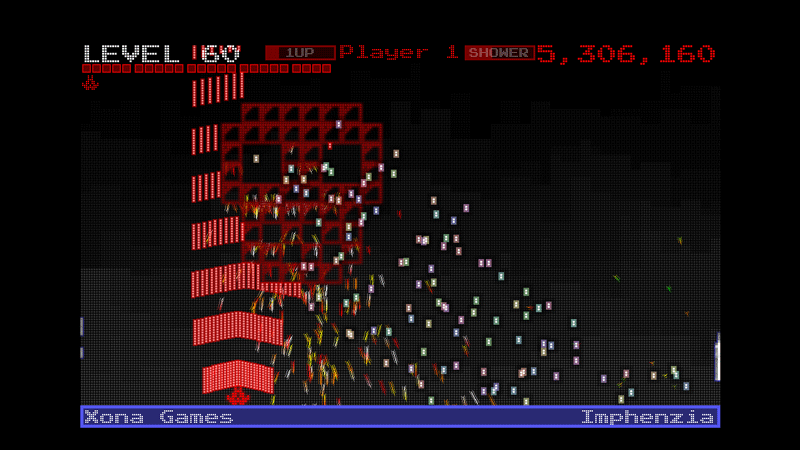 (Epic boss battles? Sure. Why not?)

Decimation X3 is absolutely fantastic. The music is solid, the graphics are great and the gameplay provides a simple, yet addictive rush of adrenaline. This is a must have title for any fan of shmups and retro games, who want to travel back to simpler time in gaming, where high scores and challenging gameplay reigned supreme.