Product placement in video games is nothing new. Various corporations (food based one’s mostly) have tried slapping their names (and sometimes mascots) onto several video games with the hopes that a venture into the gaming industry would help raise product awareness. The 90’s brought us such examples as Yo Noid, McKids and Cool Spot, while the 2000’s brought us such titles as Burger King: Sneak King and M&M’s Kart Racing. These games tend to be met with limited financial success (but some make a good enough quick buck to warrant sequels) and are mostly universally panned by both gamers and critics alike.

However, not all of these games fail. In fact, with the current age of DLC, companies have been calling upon smaller studios to make short time-wasters to put on the digital marketplace. One such company is Frito-Lay. They have been using their Doritos product line to sponsor the Unlock Xbox competition, which pits small developers against one another to make the best game that can have the Doritos logo slapped on it. Both of this year’s finalists are currently available for free on the Xbox Live Arcade marketplace. One is a post-apocalyptic racer and the other is a fun little nod to obstacle course style game shows.

Are these corporate shill freeware titles worth your time? 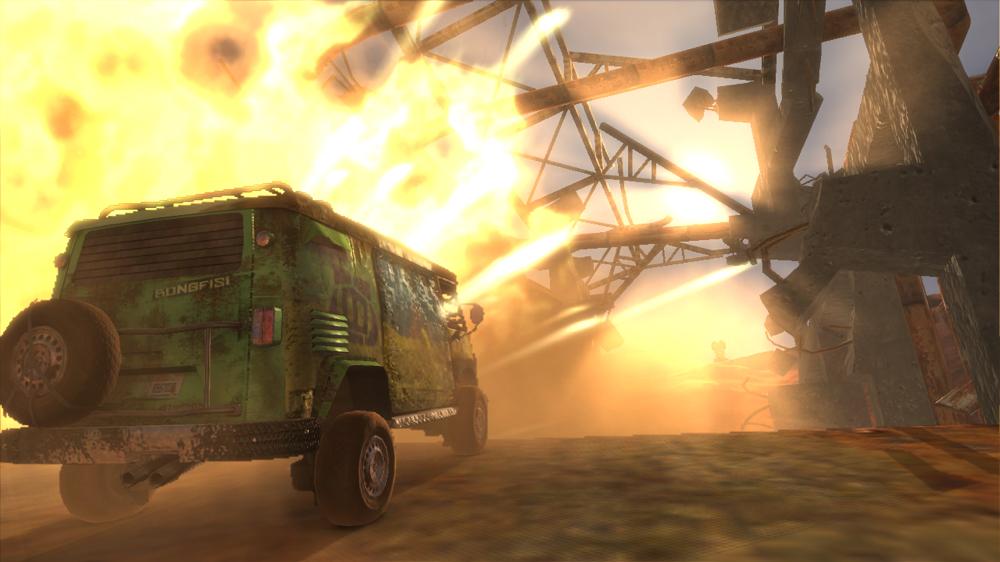 Harm’s Way is a racing game that is set in a post-apocalyptic wasteland, where players can either race against other cars or take control of a cannon with the sole purpose of blasting away the cars as they are racing through the barren landscape.

In terms of graphics and sound, there really isn’t too much to say, so I will just get them over and done with here. The game itself looks great. The cars (both in terms of fully functional and as wreckage) all look realistic and each track has a nice Mad Max feel because of the Borderlands/Fall Out inspired setting. The music is pretty much non-existent and what you do get is the typical heavy rock you would expect from a game of the post-apocalyptic genre. 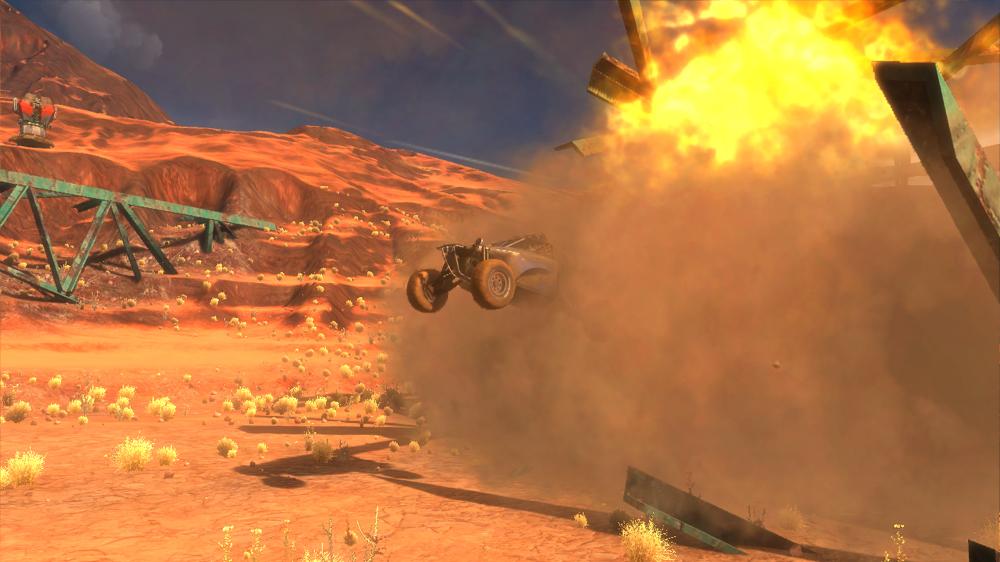 In terms of gameplay you have both your single player and multiplayer modes. The single player options are pretty shallow. You can either try out one of the three tracks (really? Only three?) individually or you can play a Campaign, which is playing all three in order. You can play both of these modes as either one of the four selectable cars (Buggy, Pickup, Truck and Bus) or as the shooter.

Playing as one of the cars pits you in a race against the other drivers. Not too much to say here, other than the controls are perfectly fluent, I like the look of the tracks and I like dodging enemy fire. However, there is one fatal flaw that I would like to address. The traps make the game more difficult than it should be. These traps are usually missiles that destroy a portion of the track or block it off/crush your car with giant boulders. Don’t get the wrong idea. I like the idea of these traps being in the game, since dodging them would add to the challenge of the game. But since the traps are triggered at the very instant you reach them, you have very little or no time to react. So you will likely fall for them every time and likely loose the race because you were blown to bits or blown off the track or crushed by falling rocks. This can also happen at any time during the race (and trust me it will happen eventually), so don’t be lead into a false sense of security if you went two of the three laps without getting killed.

If you play as the shooter, you can choose between using a Sniper Rifle, Burst Shot, Air Strike (mine launcher) or Missile Launcher. Playing as the shooter on single player is incredibly boring. Basically, the shooter just waits around for the drivers to pass by during a race with the objective being to cause as much damage to the each car as possible. The cars pass by, you shoot at them, switch to another position on the track, shoot at them again. Rinse, lather and repeat. Always repeat. Hence why I say this is boring. 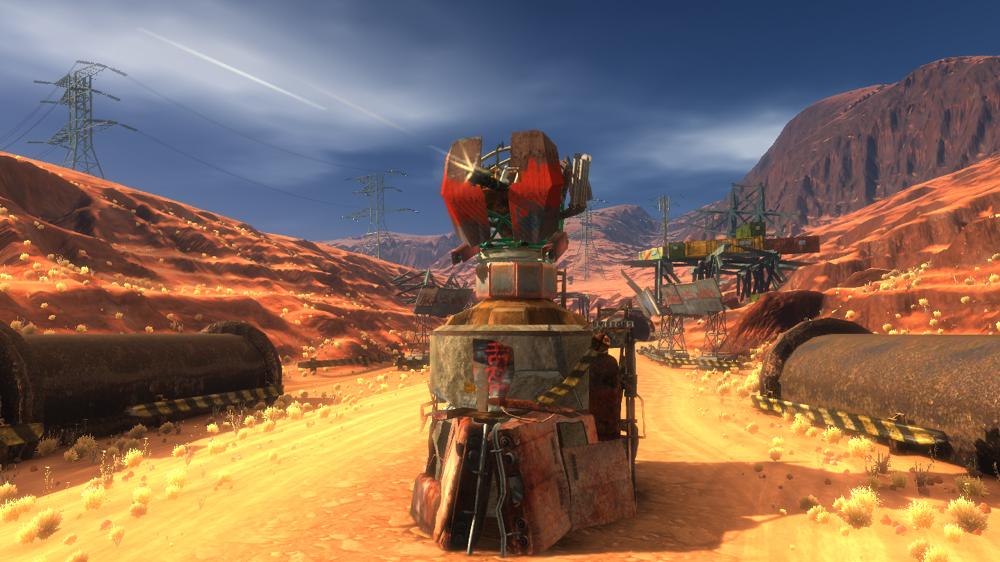 Sure, you may feel satisfied after causing your first flat tire or getting your first head-shot but it gets old fast. Besides, once you’re done firing at the cars, it is a pain in the ass to find them again, since you may have to keep pressing the D-Pad to scope out several areas on the map before you can catch up with them. Another thing that sucks about the shooter mode is the fact that aiming at your target is a really frustrating. Not only is it hard to lock on to a target because of its speed but moving the scope is quite the chore. For some reason, it keeps going in any direction except the one I want it to! I move the thumbstick to the right, the scope goes down, I try to move left, it goes up. I can’t seem to move it in any direction without it waving all over the place. If you are going to give the shooter mode a try, I recommend choosing the Burst Shot, since it is a machine gun that doesn’t have to re-load too much. Every other weapon seems to have to re-load after a single shot.

I will admit, I didn’t play much of the multiplayer mode, since I’m not one for multiplayer unless I have friends over. From what I can understand it can be played by 2-4 players locally and 2-8 online. You can play as the cars and have a race or you can play as shooters to see who can cause the most damage or some can be cars trying to complete the race and others can be the shooters who are trying to take them out. This can also done in a Co-op style mode with teams playing as the cars or the shooters. 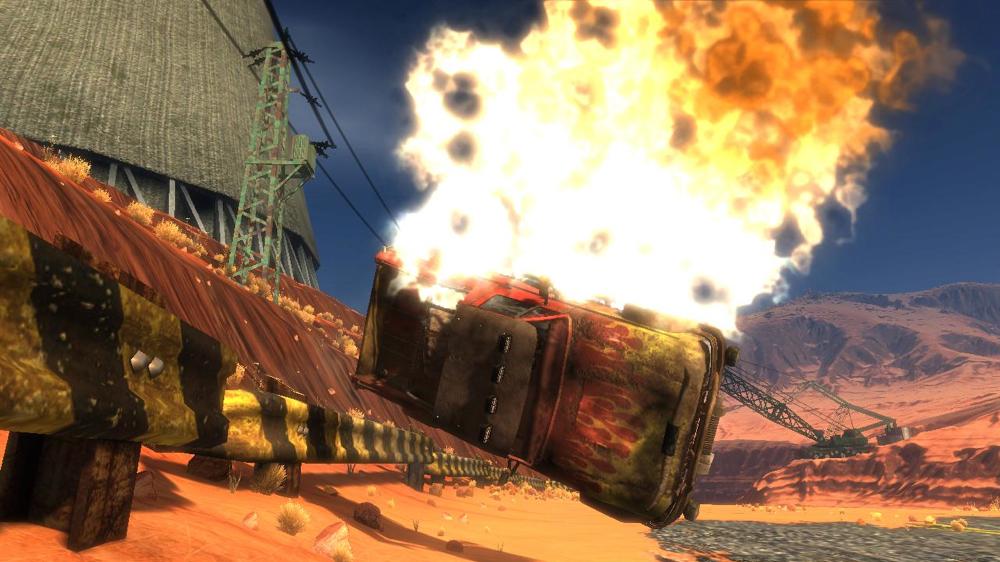 Not much else to say about Harms Way. This could be a fun game for those who play multiplayer more often but the single player mode flat out sucks. 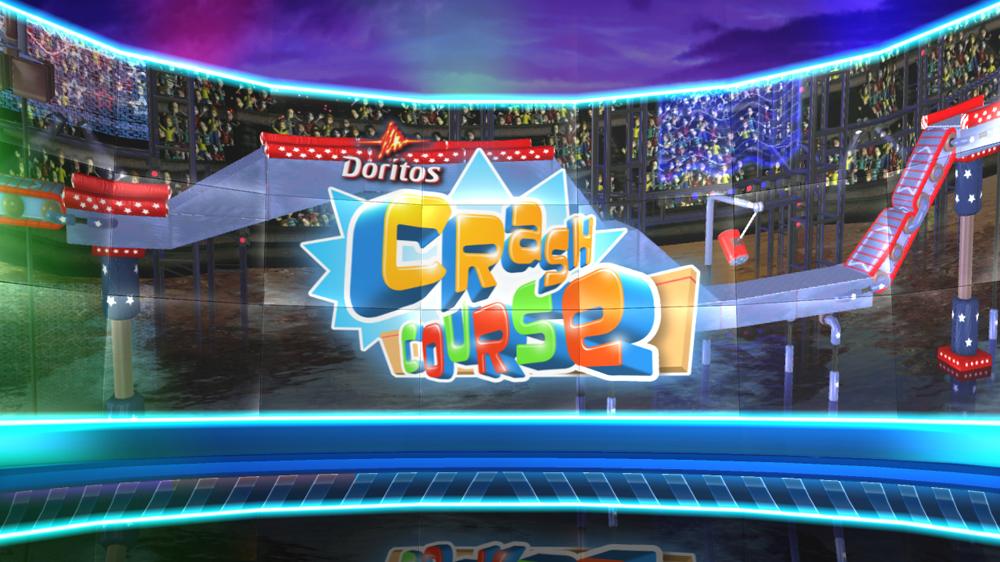 Doritos Crash Course is globe trotting game show that pits your Xbox Profile Avatar against a series of fierce obstacle courses (similar to TV’s Wipe Out).

Wanako Games and BeHaviour Interactive are responsible for bringing this neat little avatar game to life. It is said that the game’s concept was thought up by a gamer by the name of Jill Robertson who was inspired by such Japanese game shows as Takeshi's Castle and Sasuke.

The game doesn’t look half-bad, I must say. The player’s avatar will be running around in all of its cartoonish glory, as it makes its way through 15 devilishly designed obstacle courses. Like I said above, if you have ever seen the show Wipe Out, you will be familiar with this kind of course design. Your avatar will have to run, slide and jump from platform to platform as they dodge swinging hammers, paint ball shots and vertical pistons. They will also have to navigate through moving platforms, drooping pillars, treadmills, ropes and trampolines. They do this in an attempt to reach the finish line with the fastest time possible, which usually ranges somewhere between 1-3 minutes. If you fall off of the platforms, you will fall into the water below, which is another thing that will remind players of Wipe Out. Although the designs of the obstacles themselves actually look more reminiscent of American Gladiators in terms of their patterns/colour schemes.

The game also has some pretty cool graphical elements when it comes to the use of slapstick humour. For instance, if you fall off the platform, you will try to soften the landing by using an umbrella as a parachute, which fails in typical cartoon fashion. If a vertical piston falls on you, you will stumble around in a daze, as birds chirp and stars fly around your head. And if you get hit by one of the swinging hammers, you will be sent flying into the screen and either break it or slide down. These are some really nice touches that add a nice bit of humour, which really helps considering the harder aspects of the final third of the game. 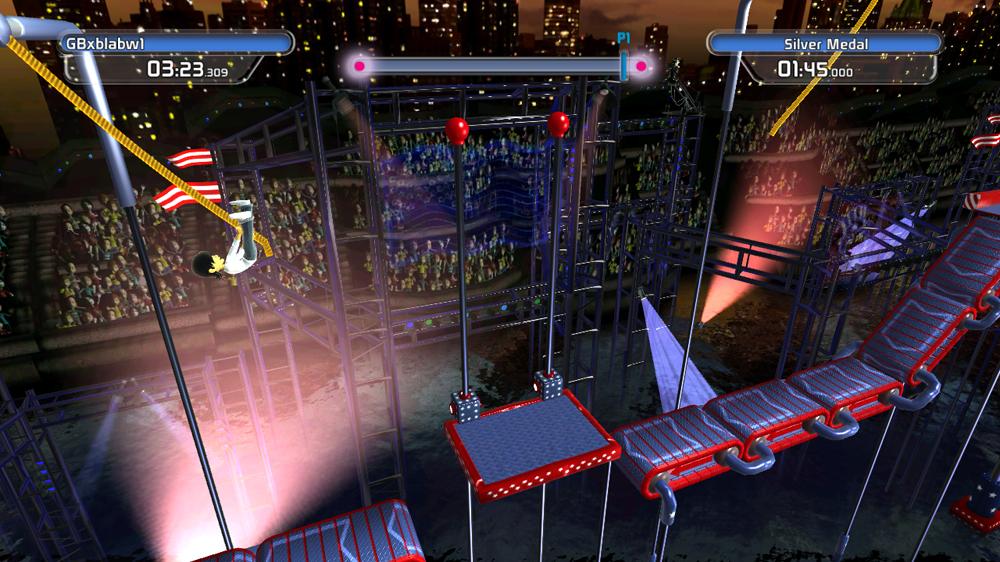 The music isn’t anything to write home about, as it is the exact light-hearted and country specific fare you would expect from a game like this and of course, the cartoon sound effects are also present to accompany the slapstick. It is standard but it fits here.

The controls are very simple. You run and slide using the thumbstick and you jump using the A button. You can also hold down the LT Button for an extra boost in speed but don’t rely on it because if you hold it down too long, you will get tired and trip over your own two feet. The controls are perfectly responsive, so I have no complaints in that respect.

Crash Course also provides both online and local multiplayer for up to four players. This is good, although there are a couple of drawbacks. One is the fact that in the sense of local multiplayer, the 2nd, 3rd and 4th players will have to use generic avatars, without the ability to customise them. The second is the fact that the avatars do not interact with one another on screen. Each player’s avatar is shown on screen via split screen but the avatars run through the course alone, which is kinda lame. However, this is a free game so it can be said that these are minor gripes. 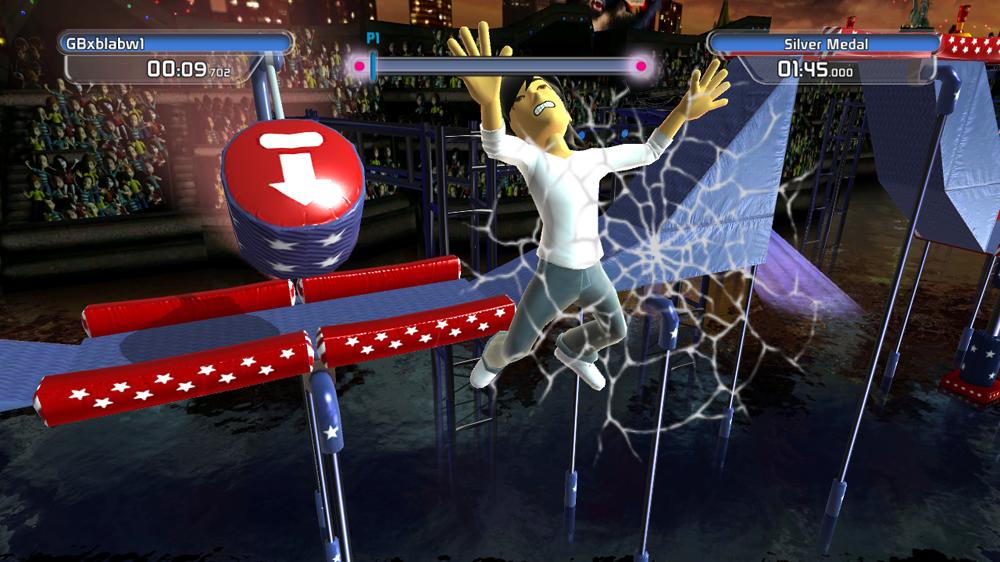 (That is going to leave a mark)

Each territory offers up five levels (again that’s 15 total), with America and Europe offering up fun little races against time. Sure they can be challenging, but they really do provide some of the most enjoyable platforming levels I have played this year.

Japan on the other hand is damn near impossible and I have yet to earn a single medal in any of its five levels. I mean the obstacles are viciously placed, which results in one cheap death after another and the amount of time that is needed to complete the levels in order to get a medal is ludicrous. Luckily the slapstick keeps it from becoming overly frustrating.

Doritos Crash Course is a rather nice surprise and is one of the last good XBLA titles of 2010. The game show element provides a good setting. The cartoon slapstick and fun platforming is a good way to keep players smiling, even with the ridiculously hard final chapter. 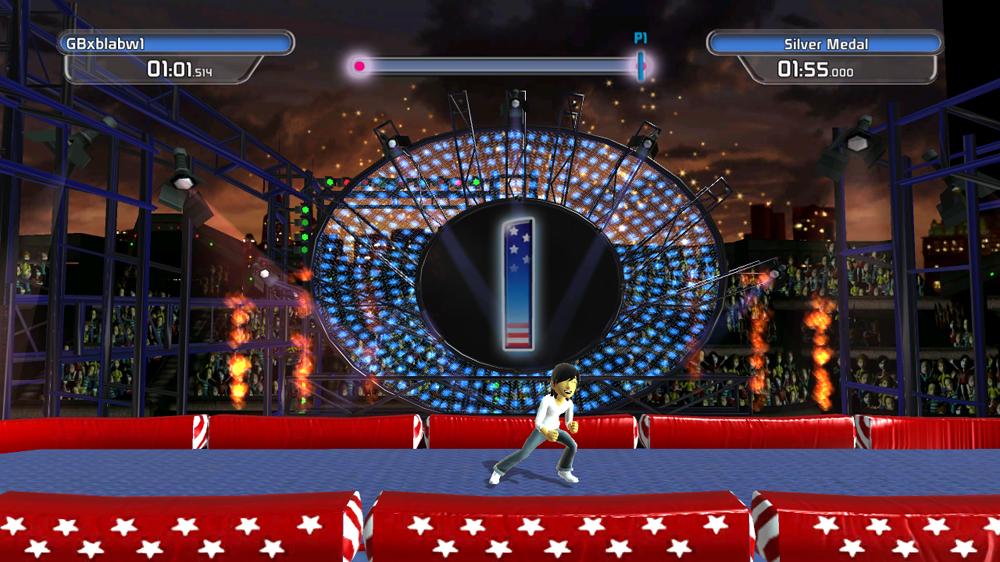 (I walk for miles inside this pit of danger)

If you are interested in downloading these games, do it fast. The winner of the competiton is chosen tomorrow (December 29) and I don't think they are going to be available for too long after that.