I think I am ready to let go.  After some 1200+ games of Halo: Reach, I am going to give up the obsessive, unending stockpiling of in-game credits.  I have completed over 200 daily challenges, finished seven weekly challenges, and amassed nearly 12,000 multiplayer kills earning16,922 medals.  Why?  It all began with Kameo. 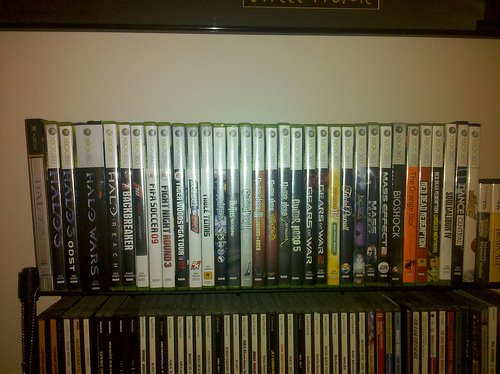 One early Sunday morning, before anyone was awake, I put Kameo in the disc tray on a whim.  I was feeling a bit nostalgic, thinking about the console's fifth birthday and THE surprise favorite of those early days.  I remember thinking what a disservice the demo did for the game, all doom and gloom, dark ogres gathered in the fortress as easy Pummelweed fodder.  But the magic of the vibrant Kameo world; the dramatic, cinematic soundtrack; and the elemental powers, especially of my personal favorite, Ash, provided the backdrop of a game that filled my gaming thoughts.  I downloaded Kameo gamerpics and themes.  I purchased the holiday DLC and ran about with a Santa-dressed Kameo.  I even changed my desktop wallpaper and named my new iBook's hard drive "Kameo."

It was only the start.  Birthday and Christmas brought new goodies under the tree and into my gaming realm — some new and some old.  Kinect Adventures, Dance Central, Lara Croft: Guardian of Light, Crash Course, Undead Nightmare DLC for Red Dead Redemption, and Mass Effect 2 made their way onto the To Do List.  An eccelectic mix, to be sure, but each title possessed something different to offer and each required time to invest in enjoyment, advancement, and accomplishment.

Looking at my present collection of games, it's not hard to find the breakdown of what and how much I play.  Two huge chunks of my gaming pie are dedicated to Halo, in its various iterations most presently Reach, and some form of plastic musical instrument gaming, Rock Band 3 notably.  It is Reach, however, that since its September release, that has received the lion's share of gaming devotion.  The constant ranking up, the attraction of credits and the shiny allure of the Inclement Weather armor effect, and the leveled competitive gameplay of Arena had me playing multiplayer in a way that I hadn't since Gears of War and the optimistic albeit failed pursuit of Seriosly.  In fact, I played more Reach in three months than I did the entire lifespan of Halo 3.

Yesterday, waiting for Tuesday Halo Night with my fellow Gamejabbers, I ventured a little further into Mass Effect 2.  I was late in completing Mass Effect, but I did finish (Paragon of course) in anticipation of the sequel.  Much like Kameo, playing Mass Effect 2 reminded me of the artistic potential of gaming, a title where the divide between cinema and game seems to fade to non-existence.  While the dialogue can border on the melodramatic, the material strives to be taken seriously and the art with which it is implemented almost demands it so.  The world and mythology is deep, the characters and alien races and technology fleshed out in detail.  Between the Afterlife's Mos Eisley cantina impression and the Illusive Man's cigarette smoking ways, the nods to two of science fiction's great works, Star Wars and the X-Files respectively, signals a desire to transport the gamer to another world and to immerse him in it.

After getting The Professor on the new Normandy, I thought it a good stopping point.  Still waiting for more Jabbers, I turned to tackle another To Do, to finish the Red Dead Redemption campaign so I could check out the Undead Nightmare DLC.  The transition from space travel to horse travel atop my trusty steed was abrupt to be sure but no less inviting.  In our Jabber GotY thread, I voted for Red Dead Redemption and though I haven't finished Mass Effect 2 or played Black Ops or Assassin's Creed: Brotherhood, I don't feel any worse about choosing it.  I would not say it is a perfect game and the dialogue errs on the side of heavy-handed preachiness.  But the characters are ones that are easy to get attached to, especially John Marston and Bonnie Macfarlane.  The scale of the world feels right, one where travel from town-to-town via horseback does not feel tedious but appropriate.  I soaked in the landscapes, the atmospheric music that echoes the Ennio Morricone strains of a good western flick.  I felt that adrenaline rush of dead-eye mode, not as a Matrix knockoff but as a representation of that special, quick draw talent.  Another world, fully realized, and yet it has sat tantalizingly untouched upon my shelf.

And so let go I must.  The funny thing is all the Halo play has not been for achievements.  Unlike Gears 1 and its weapons specific achievements that were only available in ranked play, I was playing Reach for credits and the desire to earn the kudos of a high division rating.  The truth of the matter is I don't suspect I'll ever rate higher than Iron Division, perhaps Bronze if I'm really lucky.  And the credits, well, they'll always be there.  I am past a quarter of the way to the two million necessary for Inclement Weather, but the going is slow.  The cost?  Missing out on these wonderful options.  I think it's time.