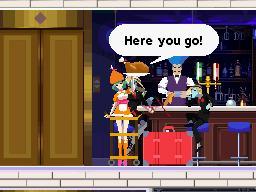 Ghost Trick's deviation from Shu Takumi's previous work, the Ace Attorney series, is immediate; rather than clicking around in still environments looking for the detail that you missed, you're actively engaged in solving the puzzle, directly moving your character.. As Sissel, a ghost who recently lost its body, you can move your flame avatar between objects, performing the titular “Ghost Trick,” manipulating objects in the environment to prevent someone from dying. This includes things like moving a ball, opening a trap door, and replacing that bullet with a woolen hat in midair (it's clear Takumi hasn't lost his touch for the absurd). Call it the active counterpart to Ace Attorney's passive adventuring.

You'll setting up some pretty ridiculous Rube Goldberg contraptions (and even stop one at one point), but what you're pulling off seems practical and connected to the game's fiction, when properly framed in the game's admittedly odd reality. Because of this, your victory feels all the more rewarding. Every puzzle solved lead to me closing the DS and letting the endorphins run though me before continuing. Every move you make feels like something you came up with, rather than following the developer's train of thought. 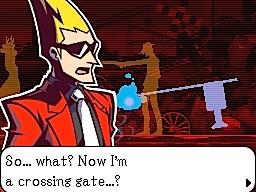 Ghost Trick also introduces the element of timing. Between simple exploration segments, you'll travel back in time four minutes before a person's death to try to prevent it. Not only are you under the strain of figuring out a puzzle within a time limit, but you also have to figure out the proper order and timing to all of your tricks. Sounds frustrating, but nothing ever gets so convoluted that you'll want to run to a guide. Only things that are relevant to the current scenario can be possessed, and while that serves for some odd logic at times, it helps balance the game's difficulty and fun effectively. You'll get stuck for a bit, but check every possibility, and you'll get it eventually.

But though there's a much bigger emphasis an actually “playing” the game this time around, Takumi hasn't overlooked narrative department. Ghost Trick's over-the-top characters are made even more so by the game's pop-art-meets-anime art style, which helps you to swallow some of the game's crazier moments, suspended disbelief intact. And it's not just all character-portraits, either; the view used to solve puzzles also hosts a number of cutscenes, further augmenting the cartoonish art style. Michael Jackson-impersonator Inspector Cabanela's eccentric dance moves simply wouldn't work in the Ace Attorney format.

This is one place where where you'll get things done. Like prevent MURDER

And really, characters are where Takumi excels. Ghost Trick's plot amounts to about a single Ace Attorney chapter in terms of scope, but this allows the game to explore its story in more depth over a longer period of time. Amnesia's overdone, but the game handles this better than most; Sissel is his own character – and a great one at that – not a player avatar, and this story is about him, even if he does end up saving the lives of yet another colorful cast of characters. The payoff of seeing all of the intricate character plots come together in a way that constantly defies your expectations is more than worth some of the expository fluff; I had my share of “Oh shit!” moments.

I foresee plenty of arguments over which of Takumi's works has the best story, and Ghost Trick is definitely in the running. But It's the actual puzzle solving and interactions with the world that raise Ghost Trick above the Ace Attorney series. It's both a fun game to play and a fantastic story to read, and that's an accomplishment that can't be overlooked.