We used to joke about the "European ending" going to the theater.  It is not happy.  In fact, by the end of the movie, anyone I would have liked or hoped the best for would be dead, perhaps in spectacular fashion.  The boy does not get the girl.  "Oedipus, those are your OWN eyes!" 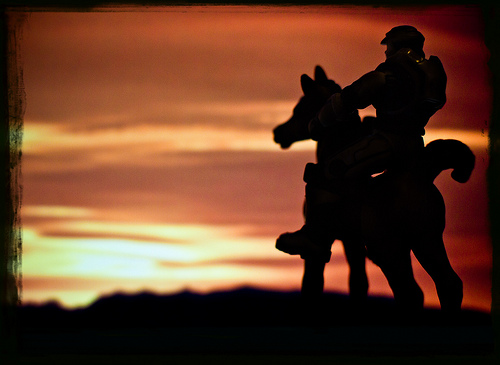 Last month, I finished Red Dead Redemption, and while the title retains my vote for Game of the Year, I am still not quite sure how I feel about the game's ending.  The tweeted version of Red Dead Redemption for those who have not played or finished goes something like this:

Part of my dissatisfaction may deal more with the execution of the finish as opposed to the substance of the finish itself.  Marston watches the pursued Dutch plummet to his own death.  Dutch explains to Marston that the government will always find a new "monster" to justify their pay.  Marston, having completed his obligation and then some to the goverment, returns to his wife Abigail and son Jack to live the quiet life.  To be honest, I was not sure whether the game was finished at that point.  Marston is tasked with farmer and fatherly duties including scattering crows, herding cattle, and teaching Jack how to hunt.

I moved from task to task wondering when, if ever, I would see the game's credits screen.  There was no messing with strangers or looking for flowers.  There was hardly any leaving the farm outside of for mission tasks themselves.  So what appeared to be the epilogue appeared both forced to bring the story to conclusion yet unending in terms of wondering how many farming missions I would have to complete.  However, after the game's version of father-son bonding, Agent Edgar Ross with the U.S. Army comes to the farm, this time looking for Marston.  Marston cannot fend off the sheer number of troops, but he sacrifices his life to aid in his family's escape.

The story flashes forward and the playable character has been replaced, a grown Jack Marston.  Following the campaign line through, he tracks down Agent Ross and kills him in a gunfight.  The story ends. 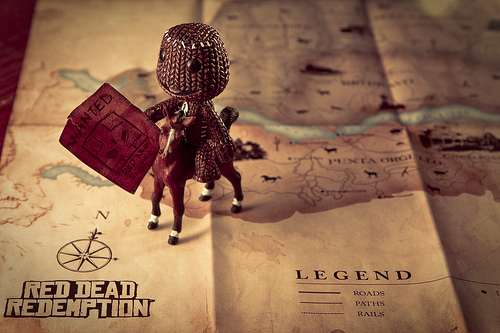 Simply stated, I ask, "Is it right that John Marston dies?"

Unfortunately, the answer is a little more complicated.  I acknowledge the fact that the ending was surprising, shocking even.  I recognize that there is not always a happy ending and perhaps thematically speaking, we are to see that during that era, the way of life was difficult — one of survival through corruption, self-preservation requiring seemingly immoral decisions.  Yes, I see that Marston's full and complete redemption manifests itself in the ultimate sacrifice he makes for his family.  Certainly Marston dying is effective as an affective narrative story decision.  And to some extent, Jack avenging the death of his father brings about closure.

I think the root of my dissatisfaction, however, rests in what I believe is the game's lack of preparation or set-up for such finish.  Take for example Halo: Reach.  While any familiarity with the Halo mythology has already informed the gamer that Reach falls, playing through the game itself, there is a sense of the impending future.  Fallen teammates, overwhelming numbers of enemies, burning buildings and even ominous soundtrack are all foreshadowing elements.  Noble Six's last stand makes sense.

I played Marston as good as I could.  I helped strangers and despite the open world freedom to do as I pleased, I attempted to play realistically.  I did not (intentionally) run over people with my horse.  I did not randomly shoot people.  I don't know that there was ever much bounty for my criminal wrongdoing and if there was one, I couldn't tell you what it was for.  There was an earnestness to Marston's character.  His repeated refrain of a desire to return home rang true.  I enjoyed the interaction between Bonnie Macfarlane and Marston because it was one of friendship and appreciation.

Yes, the game does have numerous examples of those that are untrustworthy, particularly people in whom many have placed trust or are arguably to be respected by position, rank or profession.  From Col. Allende to rebel leader Reyes, Nigel West Dickens to Prof. McDougal, all appear flawed in some way or another.

But regarding Marston, the decisions I made were ones meant to help others — admittedly some that should not have been helped.  Ultimately, I played as was required for the campaign.  But to what end?  For Marston, it appeared the goal was to get to AN end, to have recognized the mistakes of his past and to move forward having corrected them as best he could.  As the story tells it, Abigail herself follows a path of redemption from lady of the night to mother and wife.

Dutch tells Marston before he dies that the government will find a new monster to justify its pay.  The thing is, Dutch was a monster.  Marston was not.  At least not the way I played him.  In my gut, it does not seem right that Marston dies.  Ultimately, the dissonant chord struck at the end of the story does not sit right and in some ways, does negatively impact how I view Red Dead Redemption.