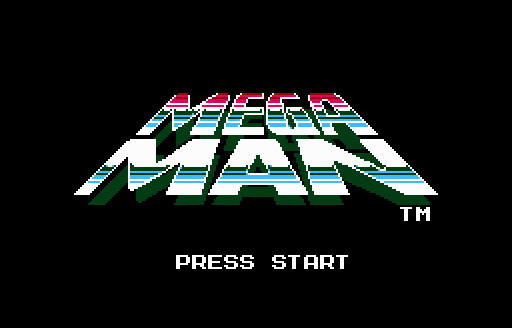 Hey there guys and gals, it’s time for yet another review and to be honest it isn’t one I was planning on writing. This is actually a response to the current challenge that has been posted on the Blistered Thumbs Review Submission Forum. The challenge is that we are to write about games that have in some way added to the innovation of the video game landscape. This is my first entry in this challenge. This is Mega Man.

Mega Man is the brainchild of now legendary game producer Keiji Inafune. Inafune began his career in 1987 as an illustrator/designer for Capcom and would work on such popular arcade titles as Street Fighter. It was at this time that Capcom decided to take advantage of the growing popularity of the NES by focusing more of their development efforts on making titles pacifically for that system. During this process, the rookie illustrator was given a golden opportunity to design his own game for the company. Drawing inspiration (God I love puns) from rock n roll music and the anime he enjoyed as a child (most likely shows like Astro Boy) he created a little blue robot named Rock Man (Mega Man to us Westerners). His superiors were a bit skeptical at first but decided to give Rock Man a limited release. The game went on to sell well in Japan and become an underground success in North America. Little did they know that the game’s sequel would result in the series becoming one of the company’s biggest cash generators, as well as making Rock one of the most beloved video game characters ever.

It should be noted that the version that I have played for this review is not the original NES cartridge but in the fact the version that was ported to the Mega Man Anniversary Collection. I know I have already reviewed this collection as a whole but I would also like to review some of the games individually as well and give a deeper evaluation of each title. This is the first in what will eventually be a line of classic Mega Man reviews but don’t expect the others for a while.

Mega Man doesn’t have too much in terms of plot but it reveals the origins of Mega Man, as well as his arch-nemesis Dr. Wily. The brilliant Dr. Thomas Light (or Right if you happen to be Japanese) and his assistant Dr. Albert Wily have created six-humanoid robots known as Robot Masters to benefit mankind. These robot masters can perform industrial tasks like logging, demolition, electrical work and labor in extreme temperatures. The Robot Masters become instrumental in the development of the settlement of Monsteropolis and all is going well until Dr. Wily decides to be a giant prick and reprograms each of the robots and orders them to attack the settlement and declares his intentions of using them to conquer the world. In the middle of the chaos, Dr. Light’s robot lab assistant Rock (who has a strong sense of justice) asks Dr. Light to convert him into a fighting robot so he can protect the world from the Robot Masters. Dr. Light agrees to this request and converts him into the powerful fighting robot Mega Man. Mega Man ventures into Monsteropolis vowing to defeat the Robot Masters and bring Wily to justice. The rest as they say is history.  This is a good story that provides some depth and back-story to the main characters, as well as sets the tone for the series moving forward.

Musically the original Mega Man isn’t necessarily as epic as some of the other entries (2 & 3 for example) but this doesn’t mean that it didn’t set a musical standard for both the series and the 8-Bit era. Now, I’m not saying that games like Super Mario Bros. or The Legend of Zelda didn’t have great music. What I am saying though is that these 8-Bit bleeps and bloops had a certain sense of beat and rhythm, as well as some pretty catchy and memorable hooks that you didn’t necessarily hear in a lot of games up to this point. From the upbeat rhythm of Bomb Man’s Orb City to the absolute frantic melody of Ice Man’s Arctic Jungle and the solid use of repetition in Guts Man’s Mountain Mines, Inafune wanted the game’s score to reflect the power and sense of immersion listeners get with rock n roll and to an extent, he succeeded. Does the soundtrack kick ass on all cylinders? Not exactly (that would have to wait until the next two sequels). But it paved the way for other games that would grace Nintendo’s little gray box and it proved that in game music can not only compliment the gameplay but possibly captivate the gaming public in its own unique way.

In terms of graphics, the game looks really good for a title that came out in 1987. The main characters and Robot Masters do have a more light-hearted or chibi style design to them (likely do the Osamu Tezuka influence) and it happens to work very well. The goofier look does make the game more child-friendly but it also gives it a certain charm that will even put a smile on the face of the older and more hardcore crowd. Even the simplest of enemies (like flying cylinders) have funny little googley eyes. The level designs are also rather clever and fit the Robot Masters perfectly. For example, Torch Man’s stage is a fiery domain, Ice Man’s is a frozen tundra and Bomb Man’s has some interesting buildings in the background that are as circular as the bombs he throws. 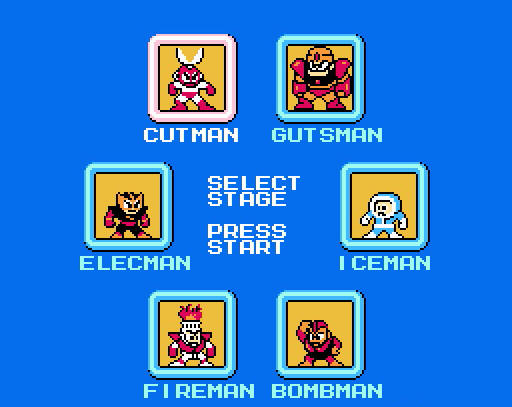 (Choose your own adventure)

There were even a couple of nice subtle touches I have seen in the game that I didn’t think were graphically possible this early on in the 8-Bit era. The first being the fact that Mega Man can blink. It really doesn’t seem like a big deal now but back then it was considered surprising to see extra details added into the character animations. Back then gamers would usually only see the basic run and jump animations.

Another neat graphical detail involves how Mega Man climbs a ladder. You see in some games that involved a character who would have to climb a distance that was higher than the TV screen, the game would simply fade to black (a la Super Mario Bros.) and place the character at the top of the ladder. In Mega Man on the other hand, the screen moves with Mega Man. Instead of a fade to black, the screen is pulled down (or up if he were going down) to that next area. I known this isn’t a big deal but it is the minor details that show just how much effort and dare I say, love that was put into the game on Inafune’s part. 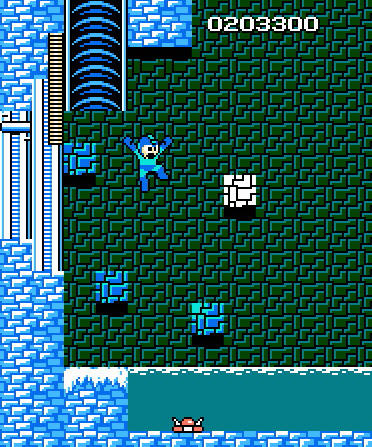 (I'll be hearing these blocks in my sleep)

Now the most innovative aspect about Mega Man is of course the gameplay. On the surface it seems like a typical platformer with the objective being to blast away the enemies on screen, to work your way to the boss and take him out. However, to label Mega Man as typical would be rather deceptive indeed. You see, in these olden times of Jane Fonda work out tapes and the Hair Metal, video games were the very definition of linear progression. Players would simply go from point A to B and by that I mean playing straight though each level to reach the final boss. Inafune decided to change all that. Now I’m not saying that this going to be the pre-cursor to the open world or sandbox style that you would see in titles like Final Fantasy or Red Dead Redemption (although it may have been one of the first small baby steps in that direction) but it gave players a new sense of freedom. Mega Man gave gamers the option to choose the order in which they would play each level, kind of like a choose your own adventure books.

Not only does it give players the ability to map out the order in which they would play each level but it would also effect the way in which each was level played because of another bit of gameplay innovation, which is its weapon system. We all know that Mega Man’s weapon system works in a similar fashion to that of rock/paper/scissors in the sense that once you defeat a Robot Master, you are then given that RM’s weapon/power, which you can use to defeat another RM and so on. This fact alone makes it a really cool feature. However, these powers can also become a useful game changer in the sense that they can be used at anytime throughout each level to help in particularly rough spots, whether it is blasting through a whole horde of enemies or just overcoming an obstacle or even uncovering a secret or two. You might be saying that special weapons like this were pretty much always common in video games. This is true but they didn’t necessarily always function the way that these powers do. These weapons actually work like health bar but instead of draining when taking damage, they drain during usage but luckily they can also be refilled in similar fashion to a health bar through a power-up, which is actually a pretty neat idea. 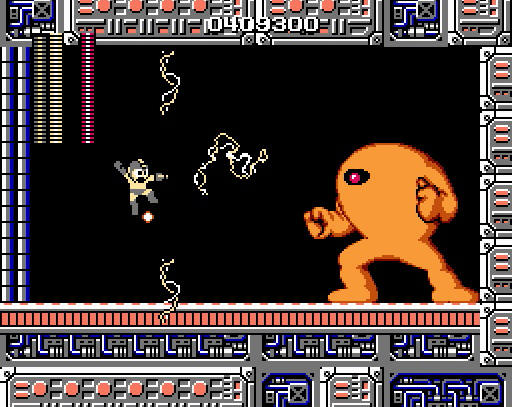 Other than these two factors, Mega Man is a solid platformer or side-scroller if you will. You will run, jump, climb and of course shoot your way to victory. But be warned. This game will show you absolutely no mercy. Whether it is hard to make jumps, disappearing platforms, large hordes of enemies, bosses with difficult attack patterns/strong sense of endurance or unforgiving obstacles, Mega Man is probably one of the first real examples of “Japanese hard.”

This game gave us Hell and you know what? We kept coming back for more because it was all in good fun. Even if at times we wanted to break the controller in frustration. But I should also say that this game is sorely lacking one thing that would have made it a lot better and that is a password system. I mean having to complete the all six Robot Master stages and all three Wily levels in one sitting is in no way an easy task and is a real test of patience. I mean these levels are very challenging and take time to master and even then you are still bound to die plenty of times. Beating the game in one sitting can take a few hours to do but if you want to complete the game, this is your only option. Unless you are playing the Anniversary Collection port, which has the life saving save feature and thank God for that!

What more can I say about Mega Man. Sure this game kicks my ass every time I play it but I’ll gladly turn it on again, look at screen and say, “Thank you sir. May I have another?” Some may say that this is the result of some sort of masochism but actually it is the quirky characters, the stellar music and the captivating and innovative gameplay that keeps me coming back every time.