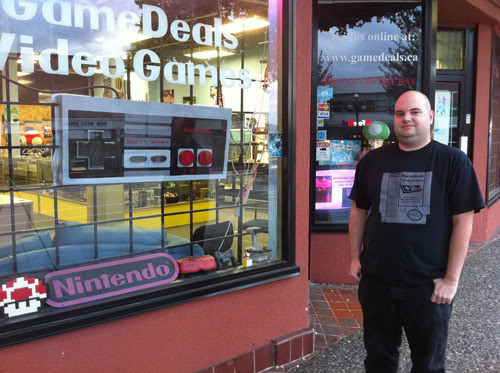 Over the last decade, Western Canada has grown into a hotbed of game industry activity. Many studios, including big names like Electronic Arts Canada, Relic Entertainment, and Capcom Game Studio Vancouver, call the Greater Vancouver Area home. The region also boasts a healthy number of art and film schools that run game-production programs.

One thing you won’t find is an abundance of independent game stores. Over the last five years, almost every brick-and-mortar outlet — aside from big-box retailers like Best Buy and specialty retailers like GameStop — has shut their doors.

One store continues to thrive despite the challenges of the global economy, however. Brian Hughes, owner and proprietor of Gamedeals, turned a flea-market games table into a profitable business in just a few short years. And while it’s easy to just blame the poor global economy and big corporations for the death of the little guy, Hughes knows that there’s more to running a successful independent retail outlet than simply being where the gamers are, as evidenced by the dried-up husks of his competition.

I recently sat down with Hughes talk about exactly how he’s been able to stay in business. Most of what he said might seem elementary or obvious, but it’s shocking how many stores ignore these simple tenets of running a solid business.

1. Get a killer location

Gamedeals opened in June 2006 in New Westminster, a city that’s easily reached by a 15-minute Skytrain ride from Vancouver. While most would think that putting a retail store in downtown Vancouver would draw more business, Hughes chose the New Westminster location with a particular strategy in mind.

In addition to the cheaper rent he enjoys by keeping his shop outside of the downtown Vancouver area, Hughes is quick to point out that Gamedeals is also less than an hour drive away from several local communities, such as Maple Ridge, Chiliwack, White Rock, and Abbotsford. And with a major Skytrain station just outside his door, there’s quite a bit of foot traffic passing by every day, which leads to higher conversion overall.

The right location can make or break a business, and this particular spot has contributed greatly to what Gamedeals is today. 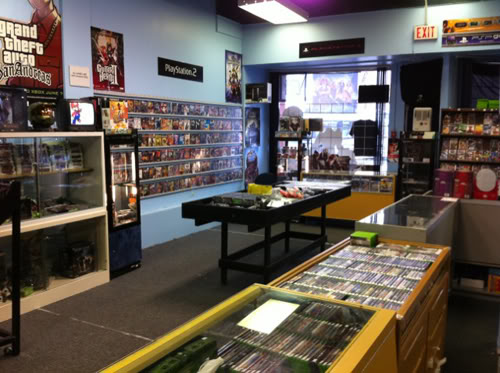 2. Out with the new, in with the used

Product, and how to manage it, is one thing Hughes knows all about. He opens up and checks each copy of Gyromite that comes through the store in hopes of finding one of those ever-elusive Famicom converters. He keeps his ear to the ground, following local leads to find the best stock to appropriate for resale. And he’s more than aware of the plight independent stores face when it comes to new and used games.

Gamedeals, like many homegrown outfits, stocks primarily used titles and accessories due to the slim profit margins that new game sales offer. “I can’t imagine another industry with such horrible profit margins,” remarks Hughes, echoing the sentiment of independent retailers across North America. “I would happily not sell used games if new games were profitable.”

Simply put, independent game stores can’t afford to stock only new titles, and those that try tend to disappear quite fast unless they can figure out a way to fleece their demographic. Knowing the pre-owned market — and how to best work that market — is a deciding factor in the world of independent game stores, and one every owner should be focusing on. 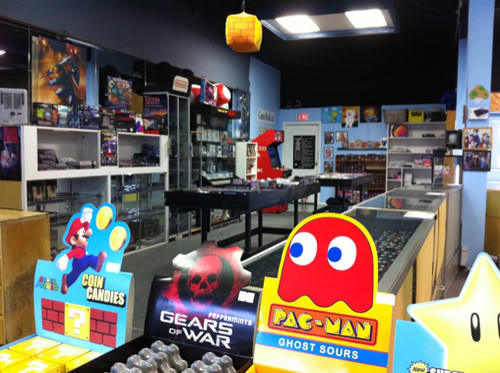 3. Price to sell, not to display

With such a large focus on cheaper pre-owned product, it’s easy to assume that the shelves at Gamedeals are constantly brimming with stock. Unfortunately, this isn’t always the case, and it’s not uncommon to see many holes and reshuffled rows within the myriad display cases. Sometimes, the selection can be downright saddening.

And for Hughes, that’s all according to plan.

“We price to sell. We don’t price to display,” he says. While it seems like a simple mantra, it’s one that most game-store owners fail to practice, preferring instead to sit on expensive high-ticket product until the right person walks in with the coin to afford it. Hughes doesn’t let difficult-to-find games walk out the door for a pittance, but he definitely prices them with a gentle push.

It’s this volume-selling attitude, traditionally employed by big-box retailers, that accounts for the occasional bareness of Hughes’ shelves as well as his brisk sales. When the shelves are empty, it means he made a lot of people very happy that day.

Of course, used product is in finite supply. Hughes admits that you can’t really force people to trade in their games to help fill the shelves, and dry spells happen. Rather than stare at empty holes and complain about the lack of decent trade-ins, Hughes decided to find an alternate revenue stream to help keep the cash flowing.

What started as a few branded candy displays has ballooned over the past several years into one of the most impressive collections of gaming-culture merchandise in the Lower Mainland. The back corner of the store now houses a wide variety of game shirts, some quite difficult to find otherwise, while the front of the store sports a selection of imported energy drinks, including the sought-after Mega Man E-tank and Final Fantasy 13-branded cans.

Game-culture merchandise is in high demand, and it helps the store stay profitable when game sales are lagging. The demand is fairly constant, according to Hughes, and seems to grow with each new shipment he receives. Where larger stores have to deal with sales losses due to game piracy and digital distribution, Hughes is confident that he’ll be around long after many other stores shut down. “You can’t download a T-shirt,” he says with a wry grin. “Now, we’re selling NES belt buckles to people in their mid 20s; in 20 years from now we’ll be selling Wii belt buckles to people in their mid 20s.”

With the way retro game culture continues to stay relevant to both the casual and hardcore, I’m inclined to agree. 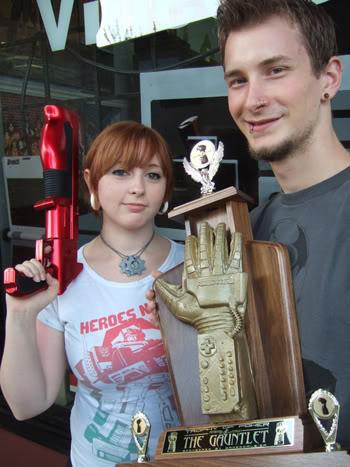 While stock management is an important part of any retail business, many similar stores still fail even with the right level of product savvy. To Hughes, environment is a big factor in his store’s success. There’s a stigma about used-game stores being dirty, unkempt places, staffed by elitist nerds who can count the number of showers they take in a year on one hand and who care about nothing outside of when Mizuguchi’s next game is due out. Hughes carefully considered this perception when he opened Gamedeals, and believes he’s solved the problem in a simple way.

Gamedeals, at first glance, looks like any other indie game store. Posters and decals cover the walls, display cases hold the best stock, and numerous collectibles and rare items line the front window. But after spending five minutes inside, the difference is clear.

It all starts with the staff. Rather than just staff the store with warm bodies that know the market price for a sealed copy of Panorama Cotton, Hughes hand-selected his skeleton crew, Jen and Ray, very carefully. He puts high priority on employees with good attitudes, social graces, and common sense. They know when to help and when to back off and let customers shop, a crucial trait tragically absent from most retail employees.

By understanding that working in a game store isn’t as easy as most people think it is and choosing staff members who have the right personality for the job, Hughes is able to maintain a more welcoming environment than similar outlets, driving repeat customers back time and time again.

6. Be creative with community and promotions

Like many indie game stores, Gamedeals runs tournaments from time to time with varying degrees of success. But rather than just rely on that tired old tactic to get people into the store and looking at the stock, Hughes has chosen to be a bit more clever with his marketing and promotion.

For starters, Gamedeals holds a fairly healthy party schedule, one that includes Mario poker almost every Friday night. The game is a Texas Hold’em variant, invented by Hughes and play-tested by loyal customers, with power-up cards in the vein of Mario Party. Buy-in is only $5 for the night, and the game has proven to be quite a success, drawing customers back to the store to ante up for a unique experience.

Hughes also runs a Child’s Play charity drive every year, collecting cash and donated goods for the cause. By ensuring that everything collected goes to local hospitals, Hughes allows local gamers the chance to be responsible within their communities with relatively little effort.

When it comes to advertising, Hughes knows that unconventional methods can pay off. Rather than run expensive print ads in a two-color process for a paltry conversion rate, Hughes shows his full-color ads during the pre-show at the Rio, a local Vancouver theatre that shows first-run movies and midnight cult classics. Many members of Gamedeals’ target demographic attend the weekly midnight showings of fan-favorites like The Goonies and Troll 2, and considering how often the ads play — combined with the low cost of running them — it’s an effective way of reaching the crowd.

Even more clever is the way Hughes advertises to his competition. Back in late August of last year, he offered a 20-percent discount to all EB Games employees in the region. This was meant to encourage them to come in and get the old-school fix that their own stores lack and to prove that he doesn’t have any sort of rivalry with his fellow game dealers. The result is employees who are more inclined to send customers to Gamedeals in search of anything that EB lacks.

But most impressive of all is the Gamedeals web series, first featured on Screw Attack and now available through the Gamedeals YouTube channel. The five-episode run, first pitched to Hughes by comedy group Disappointed People, helped spread the word to a wider audience, and resulted in quite a bit of e-fame for Hughes and Co. YouTube promotions and collaborations are relatively inexpensive to make and free to host, and with the total hits for the series running at about 15,000 views, it’s a surefire way to reach an audience outside usual advertising means.

Though he freely admits to being less interested in games since he opened the store, Hughes has no regrets about what he does for a living.

“We don’t necessarily sell games,” says Hughes. “We sell good feelings. From playing a game or wearing a shirt, it’s the same thing.”

It’s that attitude that is probably the most crucial component to Gamedeals’ success, as it shows in every aspect of the business, from the stock he carries, to the people he hires, to the environment he helps facilitate. Many game-store owners get into the business looking to make big bucks or fulfill some childhood fantasy of owning a store. By being pragmatic and keeping a positive attitude, Hughes has been able to remain in business these last five years, growing his modest shop into something profitable and fun to visit. He’s proven that it can be done without being greasy, and that’s certainly commendable.