Used video game sales have been on a lot of minds lately. Some gamers and developers have blamed resellers for taking money of artists’ pockets, even comparing it to outright piracy. It seems that some of this ire is directed at the large chain stores, the ones with a history of treating their customers poorly. But gaming hasn’t historically been all about large chain stores, and certainly not department stores; the first dedicated video game stores were independently owned, and made a living selling new and used games, as well as giving their customers a place to meet. Those kinds of stores are nearly gone, and the remaining ones have very little choice but to sell used games to stay open.

I live in a small city, and consider myself very fortunate to have an independently-owned game store nearby. Several years ago, before their arrival, my only choice was department or video rental stores. In a time before triple-A titles could penetrate mainstream media, none of the area stores knew about, or cared about, release dates for games. There was no place to buy a game the week it launched, despite having a large department store, a Blockbuster, a private video rental store, and two CD/DVD stores that sold games.

Then comes my local game store. They knew games, they cared about games, and they cared about their customers. After several months of shopping there, they would hold the newest releases for me, even hot releases like one of the two copies of Wii Fit they received. They ordered more copies of the game, but those were the only two they got from their distributor for months. Which is the problem with every hotly demanded title they order.

I don’t know a lot about video game distribution, especially the differences between large and small retailers, but I know what my game store’s owners tell me. Take a guess at how much money a small store makes selling a brand new console game, or for that matter, a console itself. My local store makes about seven dollars for every sixty-dollar game they sell, and a console profits even less. In contrast to this, most (non-gaming) retail environments pay wholesale price is closer to half of the retail price.

Even worse, when the price of a game drops, large resellers (think Best Buy) get a retroactive price drop, which can be applied to future orders. My local store? Not a chance. They either sell the game at the new price for a loss, or they try to sell it for its original price, which no one will actually pay. For some games, this can happen in just a few months, and the small stores get no warning, meaning they can’t even try to sell the game at cost before the price drop.

With used games, the profit margin is much more transparent, since we know how much they give us for our copies. GameStop sells used copies of new titles for five dollars less than new, which gives them a profit of about twenty dollars or so on new titles. Titles published in the last six to eighteen months will likely profit ten to fifteen dollars per game, although sometime as much as twenty to thirty. My local store gives a little more on most titles, and they sell for less on new ones, so their profit margin is a little less. And without this larger profit from used games, the small stores probably couldn’t survive on just new game sales.

This profit on new games is even more difficult due to the distribution system in place for small shops. The smaller a store’s orders, the more they pay for those orders, and they are not able to get near the same distributors large chain stores use. Instead, the small stores all get to share the leftovers from the large chain’s orders. In the first years of the Wii, my local store received less than one Wii console a month, zero copies of Guitar Hero III on launch, two copies of Wii Fit over the first few months, zero copies of Rock Band Wii for the first months, and more recently, five copies of Super Mario All-Stars over the holiday season.  Whenever they order the collector’s edition of a title, they are unsure if they will actually get a copy, let alone their full order.

Now, most of these issues originate from publishers and distributors, not the developers themselves. Of course, since those are the entities putting up the money, they reap the largest financial benefits of the system, and are going to be happier dealing with stores that can sell hundreds or thousands of copies of a new game, not dozens.  And of course, I’m not an insider, I am just aware of the difficulties of one, Canadian, independently-owned game store, although I do believe this is the reality for the small number of independent stores across North America 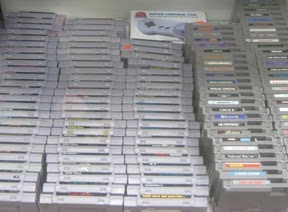 My local game store needs to sell used games to make enough money to stay open. They supplement their game sales with action figures and t-shirts, but these things also have two problems for a small store: small orders result in much higher prices than chain stores, and many of those items are in danger of becoming peg warmers in a store with limited space. The store also sells vintage games, which I have never heard described as a detriment to the medium. The bottom line remains that without used game sales, only large electronics and department stores could afford to order enough games to make enough profit. And those stores don’t lose money  each time a title’s price drops.

Is there a way for dedicated game stores to survive without upsetting developers? Perhaps if publishers agreed to lowered the wholesale price of their games, game stores would agree to not sell titles as used until they have been on the market for a certain amount of time. Ultimately, I think that all sides need to gain perspective on how they impact each other, and each others’ roles in the industry. They also need to agree as to what even constitutes “owning” a copy of a video game. If we are going to keep video game stores alive, and keep the developers and publishers happy, they need to at least start speaking the same language.

Without a middle ground, it may be too late to save the independent stores. This November, a GameStop opened up in our mall, where there is much more traffic than at my local store’s downtown location. The independent store’s holiday sales dropped by a quarter, and that drop has stayed constant into the new year. It will take time to find out if the smaller store is safe, so we should use that time to appreciate these kinds of stores while they still exist, where the staff is knowledgeable and willing to take their time to help you, and where you can go to talk games, look at vintage cartridges, and maybe even meet someone to add to our friends list.