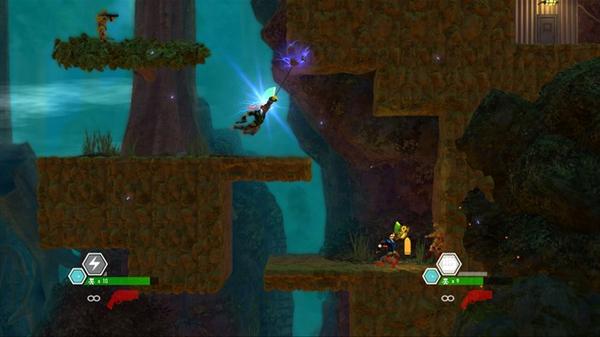 The whine, click, and swoosh of the aging Rad Spencer's bionic arm still satisfies. He may have taken on a few wrinkles (and a mustache) since Bionic Commando Rearmed, but Rearmed 2's Spencer still knows how to make the dangerous act of swinging fun as well as effective. Should you find yourself using Spencer's arm to swing back and forth endlessly or jumping between two pivot points as smoothly as the game allows, know that you are not alone. With tighter remapped controls and a greater sense of motion, Rearmed 2's swinging improves upon the original’s.

And Spencer can jump now, too. Heresy to the Bionic faithful, since no such action existed in either the NES game or the current-gen remake, but their cries drown out quickly once you start using the jump to your advantage. Spencer has finally learned that the best way to cross a short gap is to simply leap over it rather than hope there's a steady hold above him to swing on. But the jump also allows him to leap over barrels and other short blockades while climbing over slightly higher ones. The first Rearmed felt a little constrained when it came of proper movement, and the jump ably fixes that. Though the game can be beaten sans jump – a godsend for lead-booted die-hards – the greater mobility and sense of freedom will resonate well with the average 2D platformer player.

But this sequel's got other new tricks. More guns allow you to work enemy soldiers over with either pinpoint precision or explosive sadism. You'll likely stick to the faithful revolver due to its unlimited ammo, but the WASP Bazooka and Napalm Launcher may provide a brief diversion here and there. Upgrades also allow you to choose between abilities like regenerating health over time (a modern staple) or running around undetected. You can also tack on a grenade launcher, drones, or an electrical flavor to your bionic arm, further augmenting Rearmed 2's focus on variety. 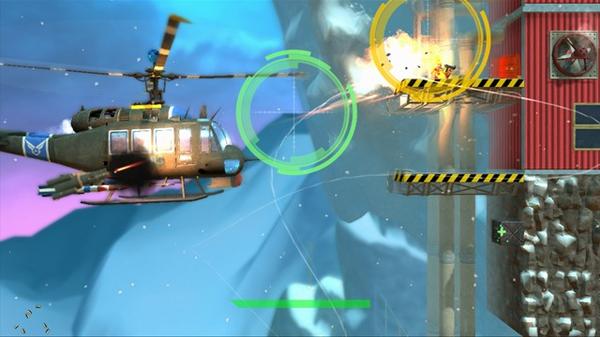 The helicopter levels are guided, only letting you aim the Gatling.

And if that doesn't help enough, you can promote each of those upgrades by finding duplicates around the levels, along with extra lives (which actually increase you per-level max instead of just giving you a freebie) and the infamous Yashichi's. With the exception of the Yashichi's, everything you find strengthens you, which is nice to see in the age of the achievement-collectible.

Without the constraints of sticking to the NES game's layout, developer FatShark also branches out to new ideas in terms of level design, though it may have been a bit early to ease off the training wheels. A few sniper mount and helicopter levels mix up the regular action a bit, but the novelty wears off after the first or second time. The levels are inconsistent, with some levels riding smoothly while others force you to retread large sections should you miss a swing or accidentally fall. Nothing that grits teeth for too long, but the bosses are the game's lowest point. They're all one-trick ponies that fall flat as soon as you find your workaround. No iterating after each hit – just follow the routine a few times and you're in the clear.

But even a few poorly planned levels and the boneheaded bosses didn't stop me from enjoying Bionic Commando Rearmed 2 the whole way through. Even after I'd seen the game's last scene – with stills that are beautifully drawn even if the story is throwaway – I wanted to go back and collect anything I'd missed in the game's 28 levels, as well as listen to Simon Viklund's vibrant soundtrack, try out the challenge levels, and run through the game in co-op. It hits a few rough spots along the way, but Rearmed 2 is still a commendable sequel to a classic, and proves that jumping and swinging can coexist without compromise.