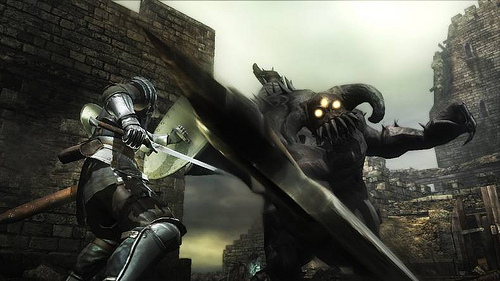 About a month after I started Demon’s Souls, I was shocked to see that my save file says that I have only spent 90 hours on my game. It felt like it should’ve been much longer than that. I kid you not when I say that I experienced the entire rainbow of emotions while playing this game:  Joy. Laughter. Sadness. Anger. Confusion. Anger. Rage. Anger. Sadness. Anger. Despair. Anger. Resentment. Anger. Rage. Anger. Annoyance. Anger. Did I mention anger yet? I honestly can’t remember a session where I wasn’t angry at some part of Demon’s Souls. As I reflected on these sessions and my outburst of indignance at Demon’s Souls inherently unfair level design, I remembered the ending to the movie 187. I’ve never seen the movie in its entirety, but I caught the very end where it brought up the concept of a Pyrrhic victory.

Pyrrhus of Epirus was a ruler at war with the Romans back in the 200s BCE. His army managed to defeat the Romans on two occasions, but after analyzing his losses, he reportedly said "If we are victorious in one more battle with the Romans, we shall be utterly ruined." In short, a Pyrrhic victory is a victory at too great a cost. The idea rang in my head as I stared at my 90 hour long save file, which includes two complete playthroughs (Demon’s Souls features a New Game Plus mode). 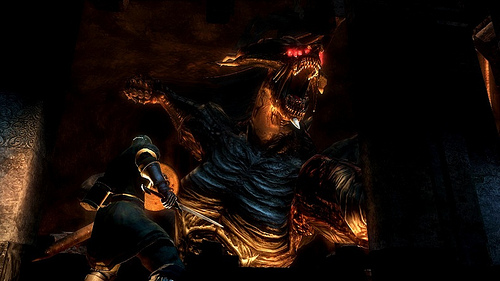 I succeeded in beating the game twice on my own terms. I chose the kind of experience I wanted, namely a swordsman with the ability to cast a wide variety of spells. I chose and worked towards the gear that fits this mold well. Aside from one, I didn’t kill NPCs, even the ones with gear that would work well with my character mold. One can take a look at my character and see for themselves that this is an expression of what I wanted out of Demon’s Souls. In any other game, I would call that a success and talk fondly of it to my friends. That’s not true in Demon’s Souls.

That save file felt more like a scar from a bad heroin injection. I don’t know how many times I’ve casually gone into that screen and loaded that file without realizing what it is. The only thing waiting for me at the end of that file is more aggravation and indignation, but I just kept coming back. I didn’t want to let some game get the best of me, and I’ll be damned if I can’t beat this game and show it who’s boss! But all that turns out to be rather self-defeating.

Demon’s Souls does the most insidious thing I’ve ever seen a video game does to a player. After the credits finished rolling, Demon’s Souls takes you straight back to the beginning of the game as if nothing had happened. It doesn’t take you to the main menu like most other games. Just back to the beginning as if everything you’ve done before, the bosses you’ve killed, the story progression, all of it never happened. You keep all the items and upgrades along with your level and stats, but everything else has been reset. The Old One is still slowly consuming the world turning everyone into a demon. You didn’t rescue Yuria. She’s back in that tower. Astraea still plagues the Valley of Defilement, and King Allant is still sitting on his throne overlooking the devastation of Boletaria. 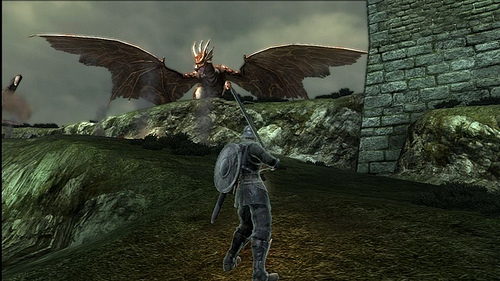 All the pain, the rage, the broken controller that unwittingly took the brunt of my pure hatred for this game was for nothing. The first time I completed the game, I felt all of this, but the suddenness in which I was taken back to the beginning of the game took me by surprise. There I was back in the Nexus with over 200,000 souls waiting to be converted into a point on my stats. Where’s the Maiden in Black? I can’t afford to lose this many souls. Wait! We’re at the beginning of the game. She doesn’t show up until after you beat the first boss. What choice have I got? I can’t let these souls go to waste. So I plunged back into the first level to start it all over again.

Once again I subjected myself to more hours of frustration and rage. Despite knowing all the dirty, downright evil tricks and design of Demon’s Souls, I still fell into a lot of its traps. After vanquishing the Old One for the second time, I was prepared for what’s to come. I was back in the Nexus, and this time I had 700,000 souls waiting for me. This time, I didn’t fall for it because at this point, I’ve stopped caring. That was a trick I learned during the second playthrough. Losing souls doesn’t matter. It’ll happen. This damned game was designed that way. I quit the game, and went back to the main menu.

And that’s where we are now. I was curious as to how much of my life was lost to this game, so I opened up the Load Game menu screen. Ninety hours isn’t as much as some of the more insane RPGs out there that people reportedly have done. In fact, I’ve played over 100 hours in Elder Scrolls 4: Oblivion and about 120 hours in Shin Megami Tensei: Persona 4. Both games I can wax nostalgic without hesitation, but Demon’s Souls wasn’t an experience that I enjoyed. It’s more akin to being victim to a random act of violence for the third time. There’s nothing to take away from it because it’s already happened twice before. Whatever character building lessons you could’ve learned you probably did the first two times. It’s just pain randomly layered on top of your life without rhyme or reason. Demon’s Souls is just that to me; Pain without any gain.

A recovering heroin addict might keep the little injection scars left behind by his previous sessions as a reminder of what he’s been through. Maybe it’ll keep him on course to a better life. There’s something from that experience that they can take with them. There was nothing I want to take away from my experience with Demon’s Souls. I deleted that profile, ejected the disc, and stored it.

This article was originally posted on www.rrbgames.com.