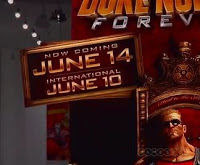 It's been an interesting week for videogames. Duke Nukem Forever is delayed again (surprise surprise.) It will now be in stores June 14th instead of it's projected May 3rd date. Duke Nukem Forever better be the most polished game I've ever seen. I'm still not convinced to even rent the game so you better prove yourself in reviews Duke Nukem.

In other news Crysis 2, the first person shooter set in New York City in the year 2023 was released this past Tuesday. I tried to resist my urge to rent it, but the early adopter got the best of me. I'm maybe 3 hours into the game and I am having a lot of fun. The game has arguably the best graphics gaming consoles have ever seen, and it runs smoothly. My favorite thing about it is the different tactical approaches the game allows you to have. You can have a straight up gunfight, sneak up and stealth kill your enemies, or you can use your stealth to avoid gunfights completely. It's really cool. The more I write about Crysis 2 the more I want to play.