Aren't we overreacting a bit? If you think David Gaider is ignorant about the gay lifestyle, firing him isn't going to solve anything. He'll probably get hired by another studio, and put out a game where he doesn't include any gay characters. We'll be back to discussions about homosexuality being underrepresented in videogames. Someone needs to educate Daivd Gaider on the gay lifestyle. 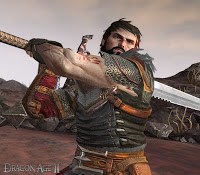 I assume the main character in Dragon Age II is supposed to be a handsome guy. I'm thinking the gay characters hitting on him should be taken as a complement. Not every gay man wants to sleep with you, but if you're a gay man whose never been asked to sleep with a man you've just met, online or in person, you might be a virgin. Again I haven't played Dragon Age II. Maybe the gay characters are as over the top as the supporting cast of Grand Theft Auto: San Andreas.

Here's a link to the Petition Fire David Gaider