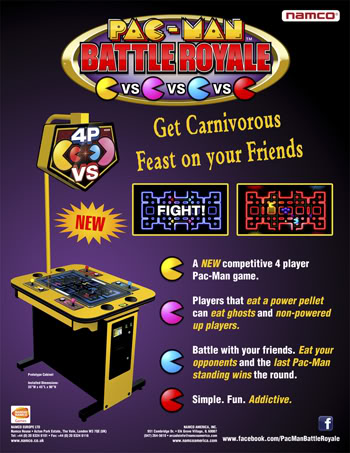 Revitalizing a classic franchise is never easy. A developer has to strike a difficult balance between adding just enough innovation to a beloved formula while still retaining the magic of what made the original so memorable. Ironically, it’s the games with the simplest designs that are the hardest to rejuvenate. Take a look at any of the attempts to update Frogger for a prime example of the dangers of changing too much or too little.

Despite this, Namco managed to make lightning strike twice with 2007’s Pac-Man Championship Edition and its 2010 follow-up, Pac-Man Championship Edition DX. Both successfully retained what makes Pac-Man so exciting — munching dots, navigating the maze, and narrowly avoiding ghosts — while adding modern aesthetics and score-attack sensibilities to create an incredibly addictive interpretation of one of the most important video games of all time.

To celebrate Pac-Man's 30th anniversary, Namco recently released Pac-Man Battle Royale, a four-player arcade title similar to Pac-Man Vs. And while it doesn’t have quite the depth or polish of CE DX, it succeeds in creating an entirely new pellet-gorging experience with one simple addition: the ability to eat other Pac-Men.

While most Pac-Man titles are score driven, Battle Royale’s round-based gameplay focuses on survival. As a session begins, players rush to gobble up dots while avoiding an increasing number of pursuing ghosts. Once a fruit appears and one of the participants eats it, a new arrangement pops up. Play continues like this until someone eats a power pellet; then, the battle royale begins in earnest.

While affected by a power pellet, Pac-Man grows to twice his normal size for a short time, enjoying a moderate speed boost as well. In this mode, ghosts are edible, but more importantly, other players become fair game, too. Being eaten removes a person from the rest of the round, as does being touched by a ghost when not under the influence of a power pellet. When only one Pac-Man remains standing, the round ends, and the next one begins.

This simple change to the core game totally transforms how players approach Battle Royale. Some take to hovering in empty sections of the maze, playing keep-away and waiting for ghosts or supersized Pac-Men to overrun everyone else. Others play traditionally, rushing through dot patterns and eating ghosts, only turning their eyes toward opponents when it’s convenient. A few players take the crafty route, stalling in front pellets and actively clashing into other same-sized Pac-Men to knock them back into poor positions.

It’s rare to see such a simple game concept result in so many emergent play styles, all of which are valid and can lead to victory under the right circumstances. Dodging ghosts while being aware of power pellets and the intentions of other players makes for a thrilling experience that’s totally different from anything Pac-Man has offered before. It's hard to match the rush of running away from a pair of giant Pac-Men, weaving and faking like a pro, and arriving at a power pellet just as your pursuers run out of theirs.

The only real shame here is that Battle Royale is currently an arcade-only release, so most of the target audience won’t have access to it due to the decline of gaming centers across North America. But if you happen to see the unmistakable shape of a raised yellow cocktail cabinet somewhere in your travels, do yourself a favor and drop in a few quarters. Hopefully that will help convince Namco that a game like this is more than deserving of a digital release on consoles.