Hey there guys and gals to yet another review and welcome to the end of the Month of Side-Scroll Shooters (A few days late I might add. Sorry) and I have decided to cap it off with a review of one of the more highly regarded titles in the genre. It is a Genesis classic and is also now available on just about every platform. This is Gunstar Heroes.

The game was originally released for the Sega Genesis in 1993 and featured a team of legendary space ace gunslingers whose mission is to save the world from a corrupt empire. Is it worth fighting the good fight or should we just let the dictatorship roll in? 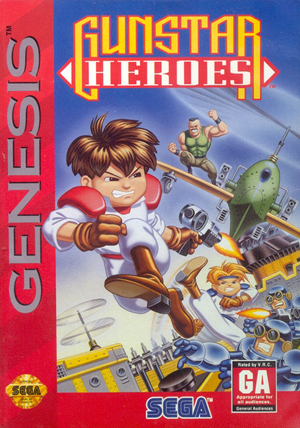 Since the story (or stories if you want to get into the whole localization issue) is kind of complicated, I’ll give you this simplified abridged version of the Japanese story (since it better sets up the GBA sequel):

Long ago, the Gunstar Heroes (Red, Blue, Yellow and Green) saved the Earth from a great evil known as Gold Silver. Once their battle was over, they froze themselves with the condition that they were not to be awoken from their suspend slumber until the Earth was once again in danger. Decades pass and a militant group known as The Empire has stolen four gems that have the power to revive Gold Silver. The Gunstar Heroes are awoken but Green (for some reason) has lost his memories and has joined The Empire. Your mission is to take back the four gems, save the world (obviously) and to restore Green’s memories.

The plot is actually very complex (more so than I made it seemed) for a game like this and it gives some pretty decent meaning to the simple task of running around and shooting things. Although it could have had been nice if the plot had a stronger presence within the game itself, rather than just the few cutscenes. Speaking of which, it would have been nice to be able to see the opening cutscene in the Xbox Live port. Just sayin.

Sound wise, we get a few tracks that are really cool, some with a catchy techno beat and others that happen to have the 16-bit equivalent of sweet guitar licks and a nice rhythmic drum beat. My favorite tracks from the game would have to be the opening theme, the level select song and Bravoo Man’s theme (it has a neat keyboard like sound to it). 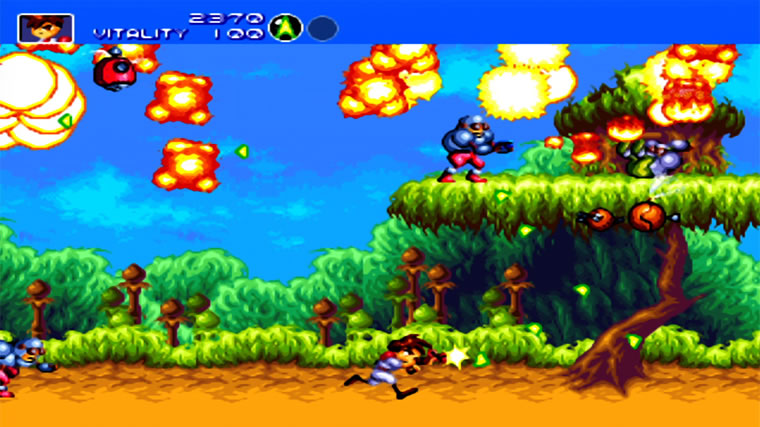 (Who thought it was a good idea to give out firearms to children?)

Graphics wise, Gunstar Heroes is definitely an interesting case. It seems that Treasure (the game’s developer) was really going for something different in terms of character designs. They seem to be an odd mix of chibi anime style design (which you see in the characters frames and faces) and the use of spheres to make up the body of each character, kind of like what BlueSky Software would go on to do with Vectorman two years later. I really must say that I really thought that although, the game looked rather kiddish (I would say a kinder, gentler Metal Slug, if this game didn’t come first), it definitely has a certain charm and likability. I also really dug the variety of the different level locations. There are levels that take place in a mine, in outer space, on an aircraft, a jungle village and even a flipping board game! Each of these levels are designed perfectly and really set the tone for the game’s wondrously wacky world. Speaking of wacky, how about those boss fights? I mean we’ve got giant dandelions, goofy smiley faces, bouncing germ things with faces, and whatever the fuck Bravoo Man is supposed to be. I should also say that I love the character animations, whether it is before or after a main boss fight, each character has a neat little way of conveying the importance of the scene through physical action, rather than the use of dialog and it’s great. Especially when used for comedic purposes.

Gameplay wise, Gunstar Heroes takes cues from side-scroll shooters like Contra and there is even a little bit of influence from Mega Man and a little nod to the shmup genre (more on that later). First let’s talk about the game’s Mega Man influence, because as a huge Mega Man fan, I just have to talk about it. The game starts off  with a level select screen, which allows you to choose one of four levels but instead of this being a rock/paper/scissors style of gameplay where you collect power-ups from each of the big bosses to strategically use throughout the game, you are merely choosing which gem you want to collect first. Although the order in which you play each level will not have the same effect as it does in the Mega Man franchise, it is still a nice touch but there is one glaring problem and it is the fact that once you die (you only get one life but more on that later) and reach the continue screen, you can’t go back and chose another level. So, if you are having trouble with particularly tricky level, you are not going to be able to skip it and go back to it later. You are just going to have to keep playing until you win and earn you’re way back to the select screen. 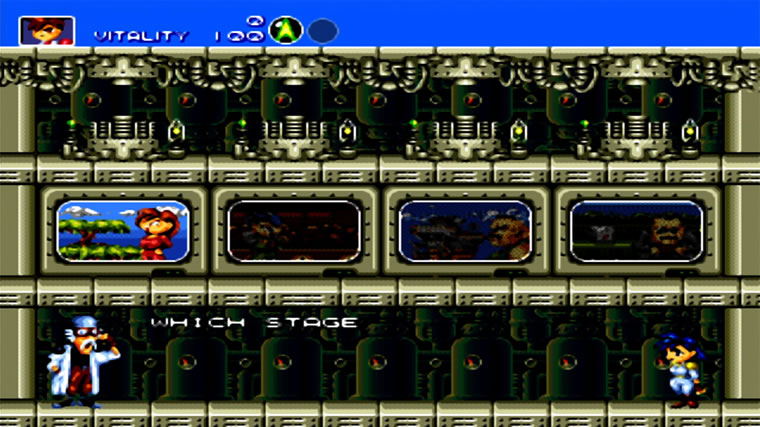 Is this the only comparison that you can draw from Mega Man? Nope. You see, like Mega Man, there are more levels beyond the level select screen. After defeating the first four big bosses, you have to then storm a vast cityscape, blast you’re way through outer space in a shmup level and then raid The Empire’s moonbase where you will face off against the four big bosses again then have a final showdown with Gold Silver. So, these final levels can very easily be compared to Dr. Wily’s castle. This in my opinion is a good thing.

Now that I got that comparison out of the way, I can talk about the basic gameplay. Before you choosing a level, you will be given the option to choose which firing style you want to use. Fixed Shot allows you to fire in eight different directions but you have to stay still in order to aim and Free Shot allows you to fire and move at the same time (all though you won’t be able to aim as well). With all of the craziness happening on screen, I can say that I personally prefer the Free Shot because it made wiping out the enemies as they popped up on screen, a whole lot easier and it was more enjoyable to just plow through enemies, rather than standing perfectly still and firing carefully.

You can also choose which weapon you want to start with. It should also be said that you can hold onto two weapons at a time and even combine them to make a super weapon, making for 14 possible weapons. Personally I like the fireballs that are pretty powerful and the green triangle things that track your enemies. 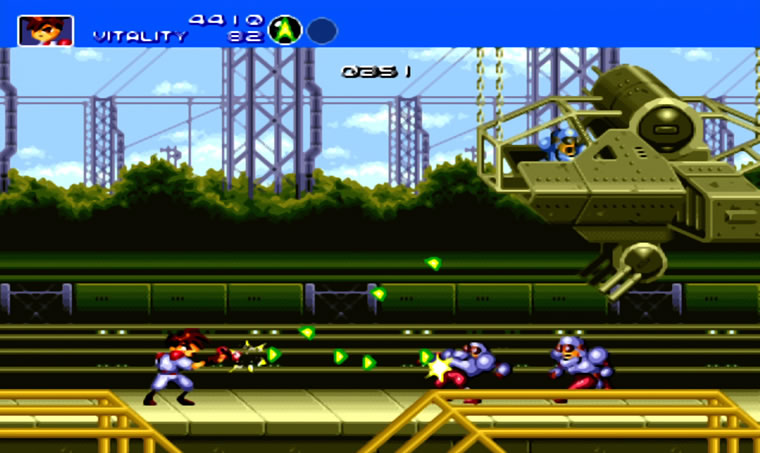 (Saving the day with triangles!)

The standard levels play in a similar fashion to that of Contra. The objective is to run through each level and blast through the enemy ranks (and even a few incredibly strange sub-bosses) to reach and ultimately defeat the main boss to complete the level. The power-ups are even gathered in Contra style, with you having to shoot at a robot bird who will drop them down.

Although GH is similar to Contra, there are also two main differences. First, you are not killed after one hit. You are given 100 hit points, which will obviously decrease as you get hit. Reach 0 and it is game over (remember you do get unlimited continues and there are check points) but you can also gather much more than 100 depending on how many health power-ups you can get without getting hit. Secondly, can also perform some neat physical attacks, like a jump-kick, a slide-kick and a throwing move. These attacks are quite handy when some goons get a little too close for comfort.

The one shmup level plays in a similar style to that of R-Type or those two levels in Super Mario Land, in the sense that you are zipping in a spaceship from one side of the screen to the other and dodging/shooting through enemy fire. This level isn’t quite as good as some shmups out there but it definitely adds a nice change of pace from the rest of the levels.

Oh and I almost forgot, you can play this with two people (Online Co-op is offered in many of the current ports), so if you are really having some trouble or just want to double your fun, two player is definitely a good option. But you can’t play as Yellow, as she is always left behind to guard the fort. 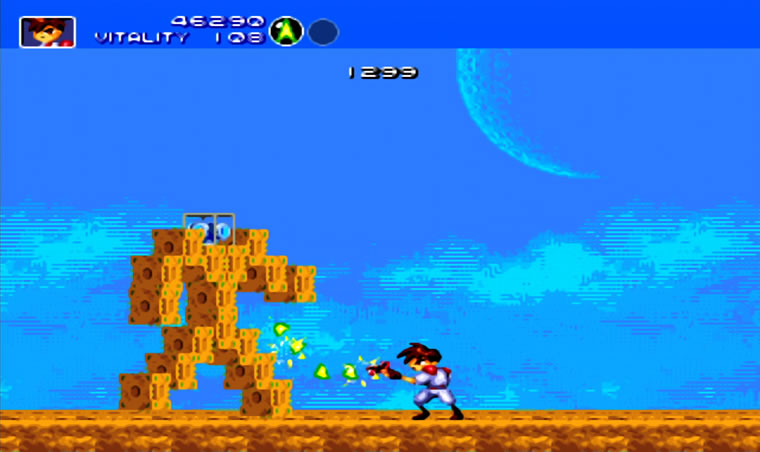 Gunstar Heroes is absolutely fantastic and dare I say not only one of the very best titles to originate from the Sega Genesis but also one of the very best games in the Side-Scroll Shooter genre period! Although the one compliant (not being able to go back to the level select screen after dying) and fairly short length (between 2-3 hours) keeps it from being completely perfect, I can say whole heartedly, that this is a must have for any retro gaming enthusiast! What are you waiting for? Download it now!