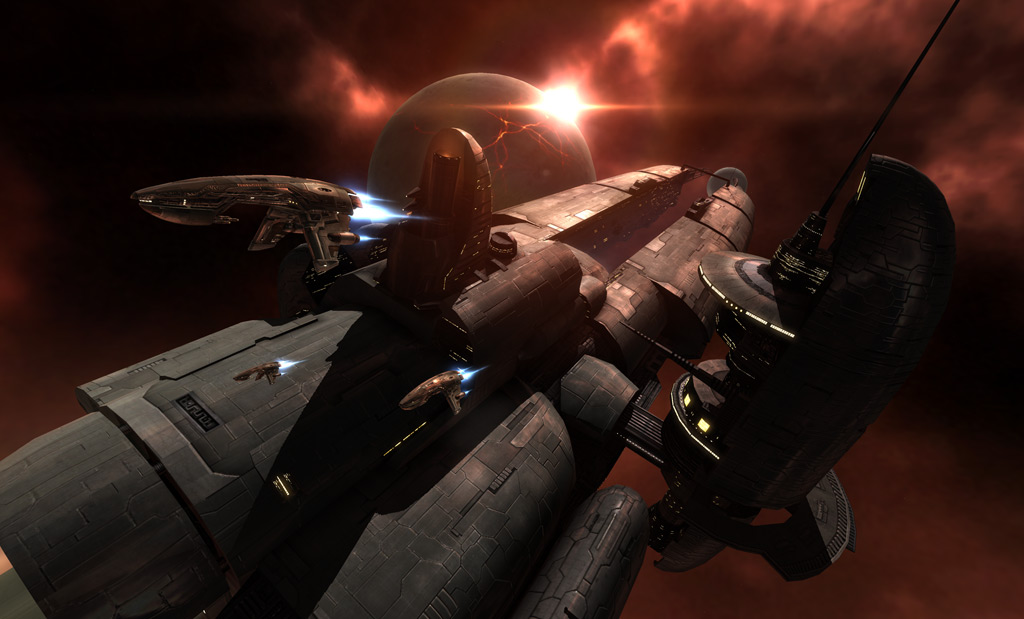 EVE Online can be a cruel and unforgiving place for newcomers, but it’s hostile environment is often the cause for the game’s appeal.

I have been bitten by greed. I want a bigger space ship, and I want to fill it’s cargohold with money so I can bathe myself in ISK. This much I’ve learned while playing EVE: Money makes the world go around. I need to set out and start making some money. Lots of money.

Like I said in the first post, I decided to use mining as my gateway to the wealth of EVE. It seemed simple enough; just go out, find a rock, and tap it for all it’s worth. I spent dozens of uneventful hours just mining away. This could be easy.

It could be, but it isn’t. EVE has this thing called “other people” that tend to mess up my plans. Since I’m just starting out, I don’t have a great big mining barge to haul ore around in all day. I am using a trick called “Jet-can Mining”, which means that once the tiny cargo hold of my mining frigate is full I jettison out the ore into a canister. This canister is owned by me, and later I come back and pick it up with a larger ship. This is a slow way to mine, but it works, and it’s faster than taking a hundred trips in a mining frigate.

Now I am basically defenseless doing this. Anyone can come up and help themselves to my ore floating in space. They are flagged for PvP if they do it, so I can attack them if I want too. It’s just that an itty-bitty frigate with a mining laser isn’t going to last too long in a fire fight. Sometimes I get a few eager people coming up and helping themselves to my ore. They fill up their cargo hold, and they fly away. It’s a pain in the ass, but I can’t stop them, so I just let them go. I might send them an angry message, and I hope that they die a painful death soon. The good news is that most of these “pick-pockets” also have small ships. No one with a “bohemoth-sized-mothership-from-the-gods” (that’s the technical term I think) is going to waste their time stealing from a  dork in a tin can like me. The other good thing is that these other players can’t kill me, because I am in high security space.

EVE has this system of security that safeguards players from aggression. Each solar system has a security rating, 1.0 is the safest and 0.0 is a free-for-all. If another player were to attack me in 1.0 space, they would be attacked and killed by Concord, EVE’s all knowing police force. Concord will kill you, that’s a guarantee, so people don’t attack you in high-sec space.

Just because they don’t attack and kill you, doesn’t mean that they won’t try and harass you to death. I’m out doing my jet-can mining, and this dude flies up next to me. He just sits there. At first I assume that he just went AFK after warping into the zone. Soon he starts moving towards my cargo. I’m guessing that he is just going to steal some ore and fly away. It turns out that this guy is more interested in griefing me than he is in stealing from me.

He takes some of the ore, jettisons it into space, and he takes the rest of my ore and puts it into his cargo container. I just spent 20 minutes mining, and this guy takes all of it. He can’t fit it all into his ship, he doesn’t have enough room. He really can’t gain anything by doing this. He asks me if I'm interested in buying some ore.

That’s my ore, pal. He just laughs. I ask him why he’s doing this, and he says it’s because his brother told him this is how you play EVE. I try to bargain with him. I’ll give you some ISK if you just go away. He sits there and laughs. I refuse to just fly away and let him win. I wait about five minutes and I start letting out a string of profanities aimed at this scum-bag. Soon he laughs and flies away. I wait until I think it’s safe, and I retake my ore.

I fly it all back to a station to sell. I realize that I could have mined the amount that he took quicker than how long it took me to wait out his stupidity, but I didn’t give up and that’s what counts.

EVE is filled with others who want to take everything you own, and some people who just want to harass you. It’s this constant fear that makes each time you log in an experience. You can’t just casually jump in the game. Every time you enter space, you are at the mercy of others.

I marked down that guy’s name for later. Sure, he caused me some grief, but someday I hope to cause him some pain. Revenge can be a beautiful thing. These types of player interactions aren’t possible in most MMOs. EVE allows players the freedom to be kind and help each other, or they can be assholes and wreck your day. Either way, it makes it fun and challenging.