Golf is known as a "gentleman's game."  Rules and regulations are very specific; some are even viewed as arcane. Even more strange than the rules themselves, however, is the fact that the player is supposed to call his own penalties. I ain't no gentleman because I'd much rather have fun. And the same is true when I game. 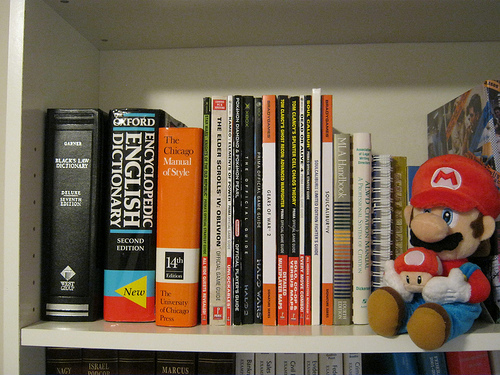 While it is perhaps for effect that my strategy guides stand in import between the Chicago Manual of Style and the MLA Handbook, I confess that I have used cheats and walkthroughs since my childhood subscription to Nintendo Power. There is no way I would have completed The Legend of Zelda without the handy map showing me where extra heart containers could be located. And for me, that is the essence of the help — discovery, wonder, and accomplishment can be worthily sacrificed for completion and, ultimately, enjoyment.

With the release of Portal 2, I am confronted with playing "as I should" versus playing "as I should but with YouTube help when I need it because if I don't, I will never finish." For me, the same dilemma was posed by both Braid and Limbo. I finished and enjoyed one game because I got to the end. The other rests on my pile of not-to-be.

When Braid was released, there was some notoriety given because its developer, Jonathan Blow, included an official walkthrough on the Braid site. The second page of the walkthrough exhorts the gamer to not use a walkthrough. I tried and tried to have little Tim collect the pieces of the puzzle, but frustration got the better of me, and I resorted to YouTube for a clue. I found solutions and completed a few levels with this aid, but I did feel guilty. In using the shortcut, I knew the game was losing something even though I could not be sure what it was — meaning perhaps. I reverted to not using help, and the game remains unfinished and now unplayed. 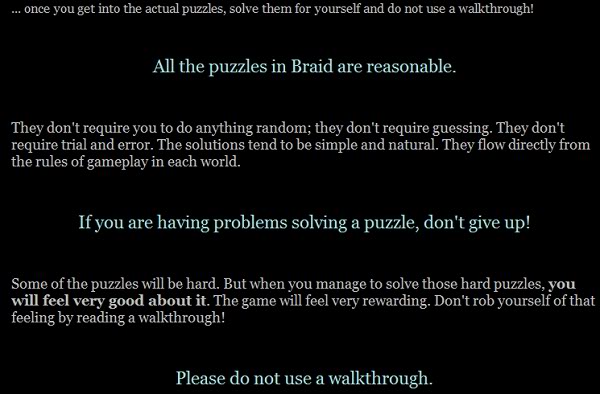 Limbo seemed to invite more progress with its greater number of levels.  However, I would inevitably hit a stumbling block. And I would try and try again. I would even take a few days off to see whether fresh eyes could make a difference. When no solution was apparent, back to YouTube I went. For the curious, a "Limbo walkthrough" search brings back 1,450 results. I tried not to rely on them, but the videos became a necessary crutch; with them, I was able to see the ending.

Now, I stand on the precipice again. I read that the Portal 2 single-player campaign lasts some eight hours. While I believe that Portal itself was very fair and that the puzzles were more accessible and science-based than the outside-the-box thinking required from Braid, there were times when frustration stood in the way of completion.

And that brings me back to golf. I understand the rules of the game and that part of the attraction for many folks is the integrity of the sport — the self-enforcement not seen in other sports. But the fact of the matter is, if I played golf by the letter of the law, Kevin Na would have nothing on me.

So I play "out of bounds" as a lateral hazard. I will give and take a four-foot gimme putt. Perhaps I do myself a disservice bending and breaking the rules, but I understand that, for me, golf would not be much fun playing that way. Similarly, I will use the gaming help when needed. Sadly, I will even pony up the $20+ for a strategy guide and quick reference on Pokemon types. When I come face-to-face with GLaDOS, it will be because I cheated somewhere along the way. And you know what? I won't let the guilt get to me because I will have enjoyed the ride too much along the way to notice.