Lets take this outside. It's more like let's take this to the bathroom. I'm spending more time on the toilet these days thanks to Super Street Fighter 3D Edition. I can't have something like wiping my ass distract me from getting that win. *washes hands*

Street Fighter 3D is the best Street Fighter I've ever played. I go back with the series. I remember playing as Ken in Street Fighter II Championship Edition on Sega Genesis. 20 years later I still play as Ken. It's pathetic to be honest. I love playing as him, and I hate playing against him. Whenever I face Ken I'm reminded just how cheap his moves can be. Stupid fire uppercuts.

The graphics to Street Fighter 3D are nice. After many hours I can say the game really is in 3D. It took me a while to get used to it. I found the 3D effect looked best when the stereoscope on my 3DS was set low. Whenever I cranked it up I couldn't see things clear unless I held my 3DS farther away which isn't easy when I'm playing in bed. I think the 3D effect looks best when multiple things are happening on the screen, such as the "Round 1. Fight!" sequence. The levels look nice in 3D. My favorites were The Beautiful Bay, Drive In at night, Historic Distillery, and the Training Stage. 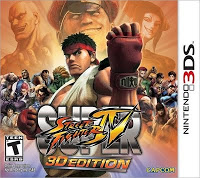 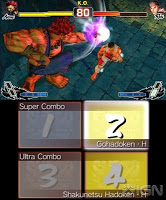 The controls are excellent. No additional controller necessary. I love the heavy punch and heavy kick on the Shoulder Buttons of the 3DS. I don't know why people such a big deal out of it. I find myself to be a better fighter with the 3DS controls. I use the D-pad over the analog stick for the most part. It gets a little frustrating when the move I want to do isn't done, but I blame that on poor execution on my part. I liked the moves on the touch screen. It gives the player a fighting chance. 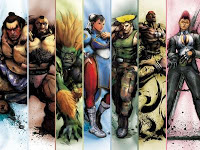 Online fighting is still top notch. I got sucked into fighting online pretty quick. When I first started I won 20 matches in a row. All of a sudden the fighters got serious and I was on a losing streak. Before I know it I had invested well over 3 hours into my first session of Street Fighter 3D. It's a good thing the battery life isn't that long on the 3DS. My biggest problem with online fighting is the Fight Request system. Once it's turned off you can turn it back on unless you restart the game. I wish there were a way to turn it back on without going back to the menu screen.

If you own a Nintendo 3DS you should check out Super Street Fighter IV 3D Edition. I did it to check out the 3D graphics and I stayed for the gameplay. If your online and you come across ErrolGames be prepared to get your ass kicked by Ken. See you there.