I'm driving down the wrong side of the highway at…well, let's just say I'm driving fast. I don't actually know my speed since there is no speedometer, but I'm flooring the accelerator and burning nitrous oxide for an extra boost. Other cars swerve to avoid me, braking hard in a futile attempt to avoid crashing. I snake around one, which then smashes against the wall, and clip the side of another; I barely retain control as I send them reeling. Unfazed, I angle myself head on with the next vehicle. I am fearless; they are driverless. 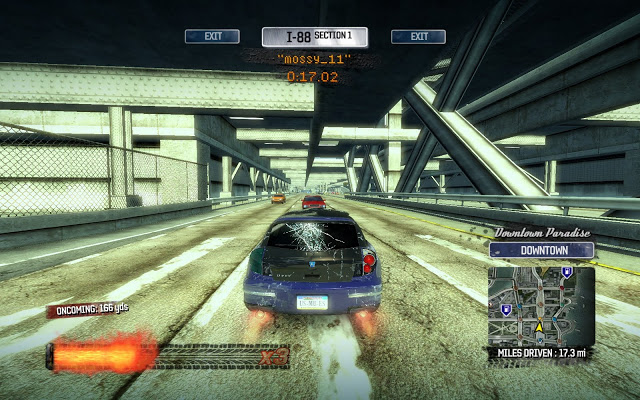 In this city, which is filled with thousands of cars (some parked, others in motion), there are no people. The cars appear to be driving all of their own accord. You might think they are robotic, but I'm not so sure; I've seen a few do things almost as crazy as what I'm doing now. Whatever the case, every single car I pass has an empty driver's seat.

Objectively, I know that the reason is that I'm playing Burnout Paradise, a game famous for its depiction and encouragement of stunningly visceral, slow-motion car crashes. The cars are driverless as a means of separating the virtual carnage from reality — where car crashes are anything but great — and in order to allow players to appreciate the raw beauty of sudden destruction without the gory aftermath of consequence: the mangled bodies and charred remains.

Subjectively, I have stumbled into a city of ghosts. And I think I'm one, too.

There’s something extremely disconcerting about a car moving with no one in it. That is, until you see it crash. Then it’s a massive relief. If no one was in the car, no one got hurt or killed. It is here that Burnout justifies its omission of people in the cars — most would find it abhorrent to see the bodies mangled, contorted, and torn to shreds in extreme slow motion, like the cars.

A cynic might tell you the developer, Criterion Games, made this decision to avoid controversy while many will point out that it’s a simple matter of logistics — simulating the physics of a human body under extreme duress would take enormous resources to do at anywhere close to the level of detail in which the vehicles break apart.

The true reason doesn’t matter, though, because the sight would make you sick. Watch any video of actual car crashes and you’ll see that it’s anything but glamorous. People’s limbs are bent and strained beyond their limits, even being sliced off in particularly nasty crashes. And blood flies everywhere. Where the destruction of a vehicle in slow motion is beautiful, mesmerizing, and glorious to behold, the destruction of any people who were in said vehicle is gruesome, disturbing, and difficult to witness.

And this is just a simulation — real crashes are even worse.

So it comes as a great relief that no people are in the cars. There is an unintended consequence, though, which calls into question just what happened to the people of Paradise City. Why does no one walk the streets? And how do these cars, trucks, buses, and vans get around with no human intervention? More chillingly, why do they cruise the streets, if there are no people to transport?

There are many possible explanations, but my own thinking is that everyone in Paradise City is dead. Including me. The city is a ghost town — its residents condemned to an eternity of cruising the streets.

I suspect that those who break the rules and drive recklessly are merely trying to escape their tormented existence. They've had enough of existing in a world with nothing but driving and street racing. When they were alive, crashing at high speed would have killed them. Now it transports them, seemingly by magic, back onto the road, with their car looking so pristine as if nothing happened. 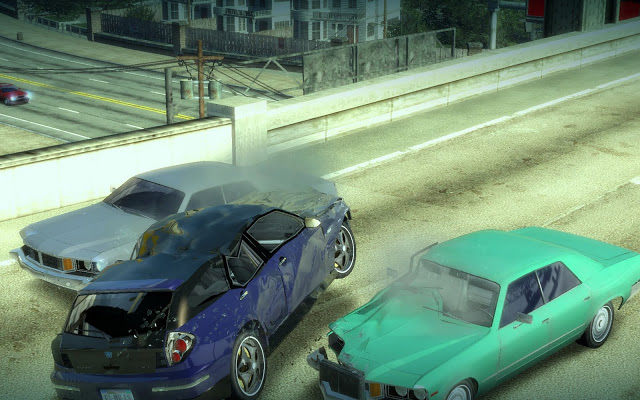 I imagine those who swerve to avoid collision are either still under the impression they're alive — trapped in a cycle of denial — or simply can't break with the survival instinct. It strikes me that those few who have realized their fate are at once more free and more imprisoned than anyone else — living or dead. They — and I — have nothing to lose. They can act without fear of consequence — for there is none of any meaning — and do things that no sane person would try. But, just as in the film Groundhog Day, eventually they'll grow tired of killing themselves over and over. They'll crave boundaries, limitations, mundanity, and mortality. But they'll never get it.

Paradise City is anything but a paradise; it's a prison. A city of the living dead, everyone here is a ghost trapped in a car with nothing to do but drive and crash, and drive again, for all eternity. How do you win in a game of chicken against a ghost?