Hey there guys and gals and welcome to another review. I should say right off the bat that this review is going to be a little bit different than the norm and something that I haven’t done in a while. Another free to play flash game has caught my attention (this hasn’t happened since I took a look at PETA’s latest gameplay abomination) and I thought that it was interesting enough to warrant a review. That and it’s based on a Stand Lee and Jack Kirby creation. Excelsior!

Movie goers and any comic fan with a pulse already know this but for those of you who are completely in the dark, I’ll bring this to your attention. The latest Marvel Universe comic adaptation film, Thor is hitting theaters today and to celebrate the occasion, BigPixel Studios has created a special 16-Bit platformer based on the franchise to mark the occasion. 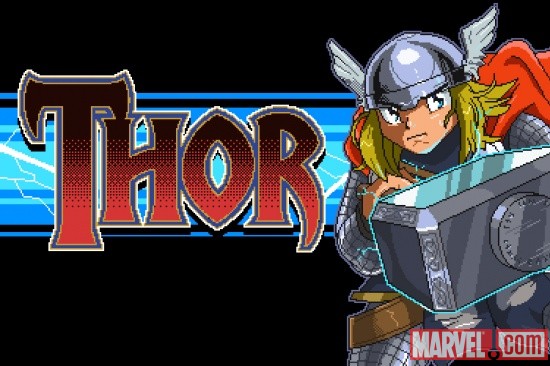 Does this adaptation of Thor really bring the thunder or does it just bring disappointment? Either way, it still looks more entertaining than Sega’s Thor related outing.

The plot is pretty minimal and more or less acts as an excuse to battle with the fearsome foes of Thor’s rouges gallery, like the evil love goddess Enchantress, the dark warrior of the underworld Sultur, some big dude named Kurse (I didn’t read Thor growing up or did he debut in the Ultimates Universe?) and sigh, the Absorption Man. I can’t really complain about the lack of plot since it is a short flash game and it actually does fit the old school theme they were going for, so I have no objections. Well, except for the lack of a certain god of mischief.

There isn’t much to say about the game in terms of audio. The music does match the mythological feel that a hero like Thor represents (Norse God remember) but it is fairly bland. The sound effects however are really cool, since they are the standard bleeps and bloops from back in the day, which are always welcomed in the ears of this reviewer. 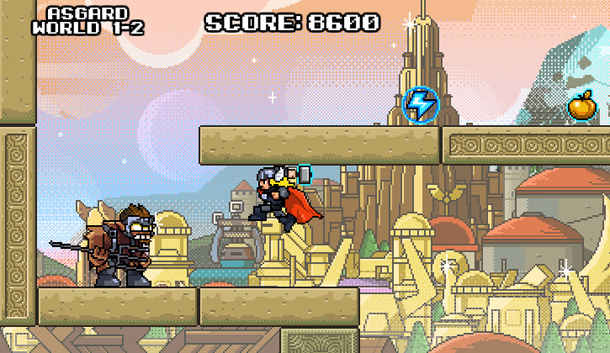 (Bringing down the hammer!)

Graphically, this game is a wonderfully blast from the past, that features some top notch looking and well-animated 16-bit sprites that look like an odd mix of Man Man and Scribblenaughts characters. Sure the style can be regarded as overly cutesy by some and I can see a good point there, since the Marvel style is traditionally rougher around the edges but it looks great (especially for a flash game) for what it is, which is a retro throwback and it is charming.  The backgrounds are kind of bland in comparison to the sprites but they do a good job of representing the locale of each diverse world, which are Asgard, a series of caves, the underworld and a city. It’s a good group levels (three for each world except for the city which has two). Not the most diverse mind but again it is a free flash game.

Oh and the boss intros are an awesome homage to the Mega Man 2 robot master intros. As a Mega Man fan myself, it is always nice to see neat little nods to my favorite franchise. 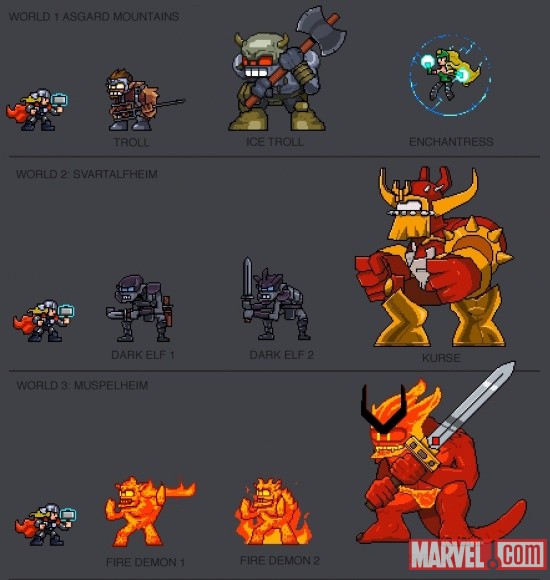 (Seriously BigPixel, you should be proud of how awesome these sprites look!)


Gameplay wise, it plays like most other 16-bit platformers of that old bygone era. The goal is to reach the end of each level with as many points as possible to get your name on the Marvel Games leaderboard. Oh and of course to defeat all of the bosses and save ye yonder maidens fair.

To aid you on your quest, will of course be equipped with Thor’s magic hammer that was given to him by the father of the gods himself, Odin to dispense justice to all of the foul naves who dare stand in his way! In this game, you can use the hammer to bludgeon your enemies into oblivion, toss it like a boomerang to take out fiends from a distance and if you have three lightning bolts collected, you can unleash a devastating lighting blitzkrieg that will obliterate everything on screen and do some good damage to the bosses. Oh, so that’s why it’s called “Bring the Thunder.” Cool beans!

I should note that you shouldn’t worry about using the lighting bolts early on since there are a large quantity of them spread around each level, along with Golden Apples (wait a second….isn’t that Greek Mythology?) that replenish your health and regular apples that give you some extra points. I can’t really think of much else to say other than that. I mean, you knock down the bad guys, jump from platform to platform (some of which move), then fight the boss once you’ve reached the final level of each world (except for the last one since both of those levels have a boss). 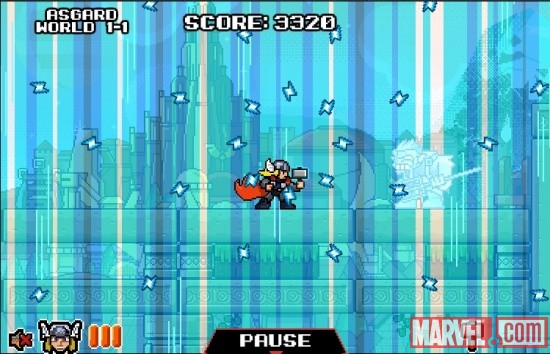 The control scheme is pretty standard for a flash game. You use the X and Y keys for your hammer attacks, the Space Bar to do the thunder attack and the directional keys to run, jump and duck. I had no problems with the attacks but I did have my fair share of problems with movement. Running and ducking were fine but when it came to making jumps, that’s where things got hard because of the position of the keys but I guess I’m just not used to these kinds of games so it would be my fault rather than the games programming. A keyboard doesn’t have the versatility of a controller but that’s just my opinion.

Anyway, needless to say, I died a lot because of those damn jumps but luckily, there are plenty of check points, the game will auto save your progress so you can always go back to it another time (you don’t even a Marvel account) and you are given infinite lives. With all of that said, the game is pretty easy considering that the levels are short, there are a lot of power ups scattered throughout the levels and of course, getting a game over is impossible. If this doesn’t prove to be enough of a challenge for you, you can always play it on the Epic difficulty setting, although it isn’t that much different. Enemies and bosses are stronger and there are a few added obstacles but it is still the same basic game.

There are also a couple of neat little extras featured in Bring the Thunder. Character Bios introduce players to each of the main characters and Survival Mode gives you an additional opportunity for a challenge and to rack up points, although it is basically playing though a level and taking on as many villains as you can without dying. 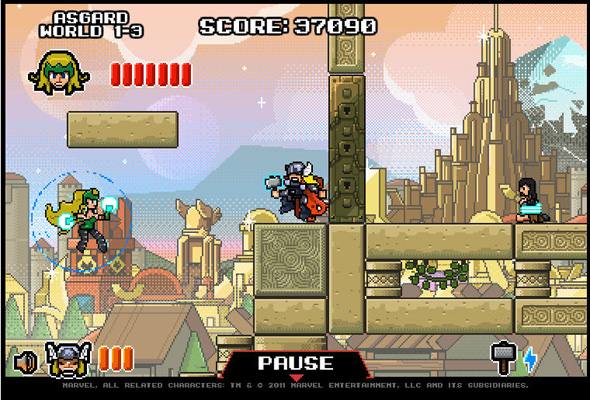 (Leave me be vile temptress!)

Overall, this isn’t a perfect game and it is a fairly short one (beat it in about an hour) but it is solid and a wonderful little blast to the past style time waster that I sincerely recommend you guys to check out.