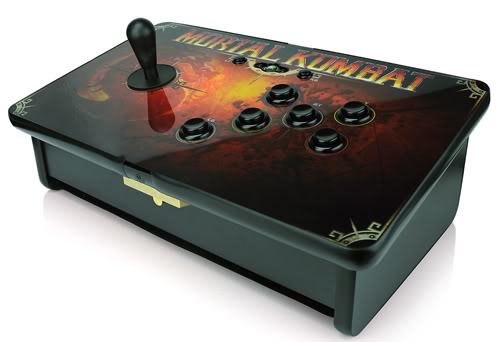 The Mortal Kombat Fight Stick, released by PDP in conjunction with this year’s Mortal Kombat reboot, comes at an interesting time. Five years ago, this stick would have stood as a great example of what a custom game peripheral should be. It’s a sturdy, beautiful looking controller, obviously designed with a lot of thought and love. However, in today’s marketplace, where the fighting game renaissance has given rise to the production of high-end fight sticks and accessories, the MK Fight Stick falls a little short of the competition, mostly due to the insistence of its designers on keeping every bit of the stick as American as possible.

When freshly unboxed, the MK Fight Stick looks and feels quite impressive. The body of the product is made of the same MDF composite that classic arcade cabinets were made out of circa the early 90s, with a thin Plexiglas top and t-molding on the edges to provide durability and protect the stick from wear and tear. This gives the MK Fight Stick some heft, so it won’t move around when placed on a stationary surface, though lap play is surprisingly comfortable thanks to a velvet-covered memory foam underside. Throw in the ability to unlatch and open the lid for easier access to the innards, plus a detachable controller cable for quick storage, and you have the makings of a fine collectible controller.

That is, until you get to the pushbuttons and stick. It’s here that the MK Fight Stick’s quality takes a sharp downward turn, which is unfortunate, since the stick and button quality is the most critical component of any arcade stick. At Warner Bros’ request, PDP opted to go with authentic Suzo-Happ components in order to best recreate the feel of a classic Mortal Kombat arcade machine. Suzo-Happ is best known for manufacturing the iconic bat-top sticks and chunky concave pushbuttons that most arcade gamers will distinctly remember from just about any arcade machine they played as children. There’s some debate as to whether the parts contained in the MK Fight Stick are authentic Suzo-Happ parts, but regardless of their origin, their quality is lacking. 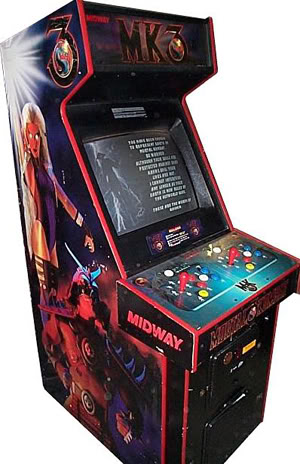 The pushbuttons have a satisfying springy feel to them when first tested, and the button layout, while not entirely ergonomic, is reminiscent of the classic Mortal Kombat 3 arcade configuration. The problem with the pushbuttons is their height, which requires the button to move a distance of three millimeters before an input will register, with an additional millimeter of movement before the button bottoms out. This may not seem like an issue, and a casual player may only end up noticing the difference after a series of missed throws, which require two simultaneous button presses, or some dropped juggle combos once he or she begins experimenting with high level tactics. However, for a controller touted to be the perfect tournament solution for Mortal Kombat, the push distance creates an unacceptable lack of precision that can directly impact competitive play, especially when compared to the touch-sensitive response seen in Japanese-manufactured components from companies such as Sanwa and Seimitsu.

Fortunately, the stick fares slightly better than the pushbuttons. The bat-top construction is sturdy enough to withstand hard inputs, and players who like to “ride the gate” aren’t likely to damage it over time. However, it’s the spring of the stick that serves as its most notable feature, as it both adds and detracts from the MK Fight Stick’s usability. The tightness of the spring means that the stick requires a fair bit of force to move; surprisingly, this can actually aid the player. Unlike most Japanese fighting games, Mortal Kombat’s special move inputs only use the four cardinal directions, with diagonals only necessary for angled jumping. With the exception of Kano’s cannonball technique, no rolling or “dragon punch” inputs are necessary.

It’s a simple matter to tap out these special move commands with the MK Fight Stick, as releasing the stick causes it to arrive quickly and accurately at the neutral position, ready for the next input. The ability to quickly input Back-Forward motions is a definite advantage over the stock PS3 and Xbox360 controllers. Of course, this same stiffness also makes the stick harder to move in the first place, and during testing, I had cramped digits for my first week of play until I got used to the extra workout my hands were getting.

This rigidity, which works well with Mortal Kombat, doesn’t function similarly when used with Japanese fighters, which require the aforementioned rolling motions. With its specialized button layout and unyielding stick, the MK Fight Stick is something you’ll likely only use for Mortal Kombat, save for the odd XBLA or PSN release that may benefit from the product’s unique configuration. Compared to the versatility of other arcade sticks, and its hefty price tag ($149.99 USD bundled with the PS3 or Xbox 360 version of the game, or $129.99 alone on the Xbox 360 only), the MK Fight Stick’s single-use nature forces a value proposition that only makes sense for the most serious Mortal Kombat fans. 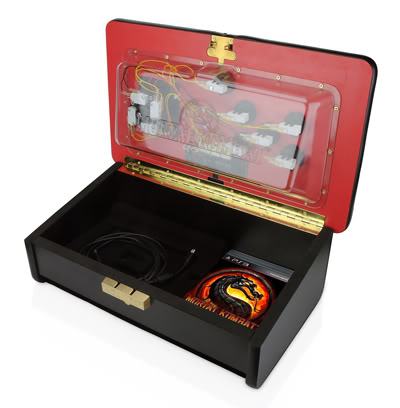 And really, that’s whom this fight stick is designed for. Those looking to wax nostalgic with a beautifully crafted and iconic controller, or those looking to casually mash with impunity, will find a lot to like here. For those who are looking for the definitive Mortal Kombat controller, the MK Fight Stick just isn’t responsive or user-friendly enough for competitive and tournament-level play. Serious Kombatants will probably be better off purchasing a Mad Catz Tournament Edition stick with the optional Mad Catz Tournament Edition Combat Panel if they really want to Test Their Might.

[The product covered in this review was purchased by the reviewer. Xbox 360 version tested, though the PS3 version of the stick is functionally identical.]