That's Jack's opening line from Mass Effect 2 and once I heard it, I was in love.  See, when a game introduces us to one of the most feared badasses in the galaxy, we usually get a buff, trigger-happy nut job or a cigarette-smoking, ex-special-forces recluse. Lots of testosterone. The folks over at Bioware knew this, which is why we learned before ever meeting Jack that her name was, well, Jack. This set the stage for one of the most brilliant bait and switch maneuvers in videogame history when it was revealed that Jack was not only female, but infinitely cooler than the masculine cliche that even Commander Shepard resembles. Covered from head to toe in cryptic tattoos, she cusses like a sailor and and wears nothing from the waist up but a few strategically placed leather straps. And if her looks don't kill you, her biotic powers will certainly do the job.

How many times do I have to tell you to leave the toilet seat DOWN!!!

Of course, Jack's against-the-grain character is more than skin deep thanks to the Mass Effect 2 script.  After embarking on her loyalty mission, I learned of a tortured human being who may actually be justified in hating the world. Furthermore, in pursuing a relationship with Jack, I saw that beneath her hardened exterior is a woman who desires affection despite her defensive, cocky and stand-offish demeanor. Sorry for the TMI, but it's true.

By the time I finished ME2, Jack had gone from total bitch to lovable outlaw, though she never lost her toughness. I chose her on most missions because, let's be honest, she could take anybody on the Normandy on the grounds that she's crazier than anyone else in Shepard's posse. Of course, it didn't hurt that I dig tattoos.

“Turns out, mess with someone's head enough, you can turn a scared little kid into an all powerful bitch.” 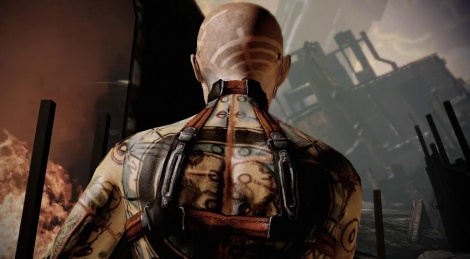 Bioware could write a book on her tattoos alone.