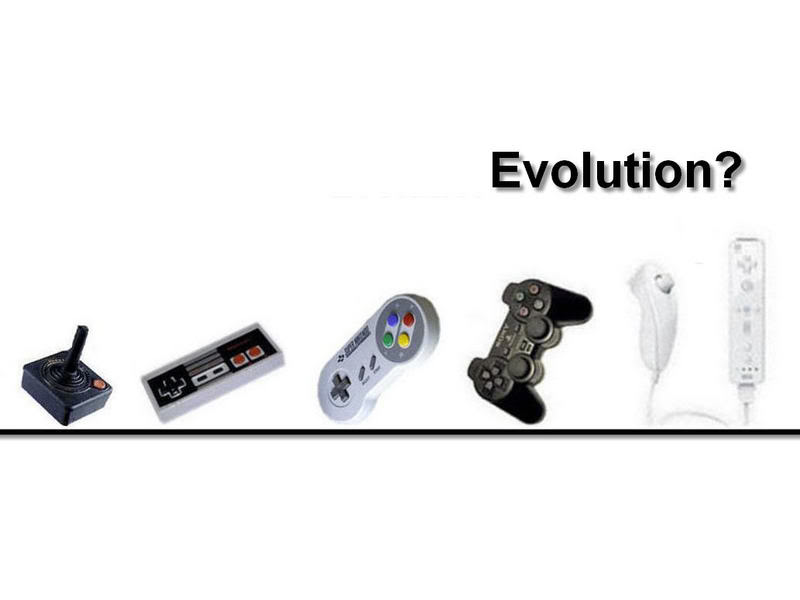 The concepts of what a “video game” all began in the 1940s with an interactive Cathode Ray Tube device, pioneered by Thomas Goldsmith and Estle Ray Mann. It was an analog device that had you, the player, firing missiles at stationary targets on the screen. It was one of the earliest, if not the very first, video game concepts, and it paved the way for a new innovative form of entertainment.

It took a little over twenty years later for a game like Pong to come out, which pioneered the home console market. Ever since then we’ve experienced a fast and rapid advancement in video game technology that can be likened to the Law of Accelerating Returns.

The Law of Accelerating Returns, in a broad sense, is how rapidly technology is accelerating to benefit us as a civilization. Computers become faster, more capable, smaller, more efficient, and more able to think on its own that to a certain point in our civilization we will reach a technological singularity (an event in which technological progress can eclipse human progress) in which human evolution will eventually cease.  It is something that seems like it would belong in a sci-fi book, or the storyline of the new Terminator movie, but it is something that many scientists and physicists are studying to this day. 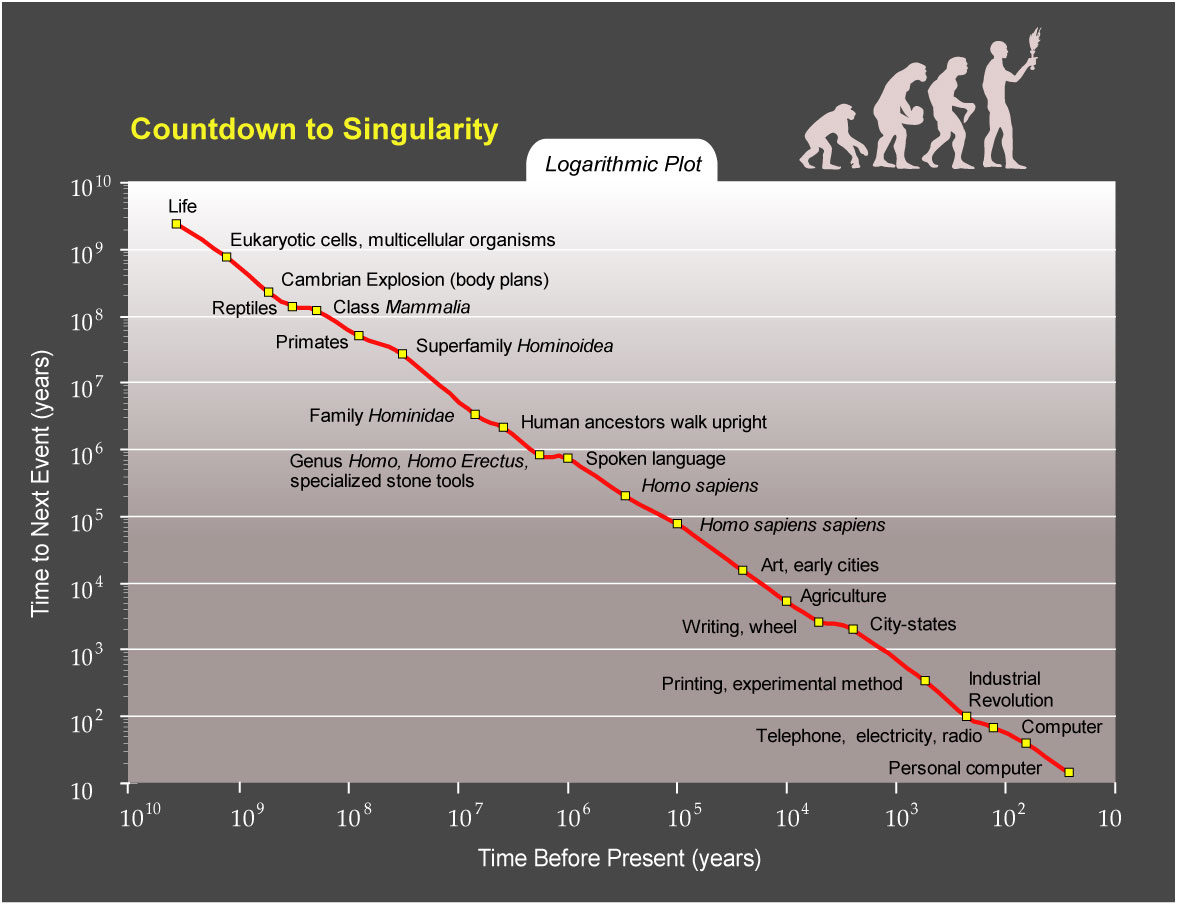 A graph explaining the Sigularity Theory

Many experts can divide the evolution of video games in “Generation cycles.” Starting with the first generation, which featured systems like the Odyssey, Atari 2600, etc, home console games were on the rise alongside stand-up video game machines. The stand-ups featured the best play for your money, but the home consoles were really what drove the competitive video game market. That soon came to a crash in the mid-80s when home computers became more and more popular, and video games companies began to develop more for the new world of home PCs. The Nintendo Entertainment System brought the domination of home consoles back into the homes of families worldwide with revolutionary graphics and control schemes, and featured bigger cartridges and better graphics than most PC games at the time.

The dominating home market continued into the next generation with the Super Nintendo and Sega Genesis.  Cartridges grew smaller as chip sizes decreased in size and became easier to produce. More complicated controls schemes, more buttons, and larger game lengths started the push for more innovation and more advancement.

With the introduction of CDs on the music market, other companies began to see the benefit of its large memory storage space capabilities, and cheaper production rates. The Sega CD had the right idea, pioneering the CD console generation alongside its PC brethren. However it proved to be too soon, as a lack of great video games for the system, as well as technological and hardware limitations, dominated the market.

The next wave of systems, which came in the early 1990s, the Sony Playstation and Sega Saturn, made the CD video game market the standard. It also began the explosion of 3D gaming, with full and expansive 3D worlds, massive exploration, and the introduction of the analog stick that had you move on what was termed a “Z-axis”. Many at the time thought that CD-based games were the only way that any systems could produce such wonderful graphics; however Nintendo proved them wrong by introducing the Nintendo 64, which featured comparable 3D graphics on a cartridge. This was the explosion the video game world was waiting for, and which began the fast-paced evolution of video games.

Ever since then, with the release of the ever-popular Playstation 2, Gamecube, the dead on arrival Sega Dreamcast, Microsoft’s new venture with the Xbox newer innovations began to surface (online play, the use of larger disc space with DVDs) . The next generation came quickly with the advent of Microsoft’s Xbox 360, Sony’s Playstation 3, and Nintendo’s wildly innovative Wii, which brought the idea of motion controls into the mainstream. Microsoft and Sony followed suit with their own versions of motion controls; the Microsoft Kinect and Sony’s Move.

This current generation has seen the most change in the world of video games, in my opinion. One can argue that the new world the Sony Playstation and Sega Saturn opened up was indeed the most innovative of all time with its introduction of 3D worlds and sound. However, the most innovative ideas and advancements are happening now in this generation.

Video games are growing at an exponential rate.  The demands for innovation grew higher by the consumers who demanded more new technology, and demanded it sooner rather than later. This can work both to our benefit, and our detriment. Video game consumers demand more realism, more life-like movements and facial expressions, better writing and storytelling, better sound, better colors, etc. This can all be seen in comparing the game Resident Evil, and L.A. Noire, as seen in the side-by-side pictures below.

Once the idea of video games being an avenue for cinematic storytelling pieces, the push began for more movie-like presentations. L.A. Noire, currently, has become the pinnacle of human storytelling with its life-like facial expressions that display human emotion better than anything on the current market.

The demand on developers seems to be unfairly in regard to its consumers, reviewers and critics; however humanity is fueled by progress. Some may not be able to argue against how fast our technological evolution has been in the recent years. Now, the tools of development are put into the hands of video game consumers everywhere. Anyone now can make games to be released for the PS3, Xbox 360, and the PC for little to no money, and with the proper motivation (most of these adventurists don’t realize the complications and struggles in making a fully functional video game).

Multiplayer games began to rise with the increasing speed and ease of the internet. Now you can play games online with hundreds of people all at one time. It brought connectivity across the world to a whole new meaning, something that hadn’t been done before since the onset of a home internet set up nearly fifteen years ago.

This console generation has seen the change from being a kids’ toy to an adult’s casual entertainment device. As video games grew up, so did its players, which is why as the years go by, the average video gamers’ age grows (according to the US Video Games World Report in 2008, the average age is now 35 years old). The video game industry can now be held on the same pedestal  as major motion pictures, which all up until recently has dominated the casual entertainment market.

What is next for the video game market? If you buy into the Singularity Theory, and the Law of Accelerating Returns, the innovation will become much faster and much more prevalent as developers are pushed to continue to evolve. Video games will only advance in graphics and physics more and more. Computer AI will be faster and smarter, and more able to think for itself. Video games may even one day transcend humanity, to where it will even do the thinking for us and simulate real life for us. The United States Military is currently using video games to simulate modern warfare tactics and strategy against potentially large militaries like China, Russia, even North Korea. Not only will the technology become more realistic, it may even become our tool for innovation and evolution.

If you don’t, then video games will only get more fun and more casual. With the increasing popularity of iOS and Android games, video games are falling into the hands of more and more people worldwide, and if anything those kinds of games prove that sometimes the simplest mechanics that were pioneering the video game market over twenty years ago are still the most fun and entertaining. Regardless of what opinion you hold, video games will become a more and more dominating entertainment market for consumers all over as the years pass.