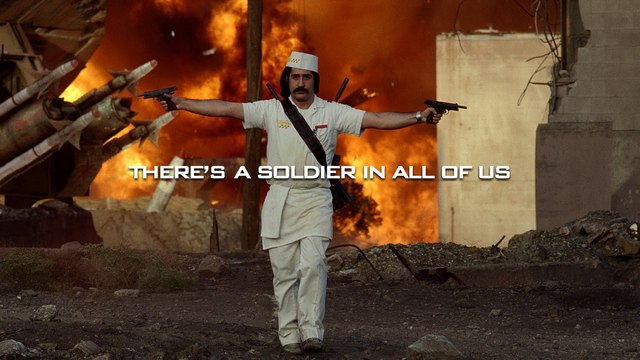 As gamers, you and I know what this hobby of ours is all about, and we know what entertains us. For me, that's exactly what good advertising should do: entertain. It should be fun, insightful, and relatable. What it shouldn't do is treat us like we're four years old and shout sales pitch after sales pitch until we want to high-five someone in the face.

The ads below are a few from the last 10 years that speak to us on our level. They convey the truth about video games…and more importantly, about the people who play them.

Honorable mention: Xbox Live — It's good to play together

Serious online console gaming started with the Dreamcast, but it was Xbox Live that brought it out of its adolescence. With advertising as crystal clear as this, that's no surprise. I'm not a fan of the stereotyping (not every girlfriend hates video games), which is why I've given it an honorable mention. But the fact that you don't need to understand this couple's yapping is a testament to how universal the idea of online gaming has always been, even when it was just an itch in the Xbox's pants.

To gain any ground on the Nintendo DS, Sony needed to do something different. Not only did this campaign stand out, it left people wondering what strain of leafy-green substance its creators were smoking. The brand of WTF humor is right up my alley, and it makes me appreciate Sony for taking such a risk.

OK, what I really mean to say is that these ads just make me want a gun that shoots love potion bullets. You still working on that, Sony? Great. Thanks.

Feel free to give me a hard time for this one, because the actual commercial, like the game, is not that great. I'd rather see some good storytelling than a bunch of beauty shots of gameplay or cut-scenes. That said, the song that came out of these 30 seconds of mediocrity is anything but ho-hum. It's seriously hilarious and has over 2,000,000 views on YouTube. Oh yes they did.

8. PlayStation 3 — Anything with Kevin Butler in it

The only reason these aren't higher on my list is that they are so formulaic. Even so, the writing, acting, and directing in these commercials are so spot on, you can't help but wish every office had a Kevin Butler running the show.

Fun fact: If you look closely, Kevin Butler's title changes in each ad. Search for the rest on YouTube to see what other jobs he's held at Sony. It's not just fun — it's a completely unproductive way to spend your work day!

This one will always have a special place in my heart. I first saw it during a journalism class I took in college, and it taught me that more often than not, the simpler an idea is, the better it becomes. In this case, that idea can be summed up in one word: fun. Are video games fun? Yes. Truth in advertising? Imagine that!

Any time you cram Kobe Bryant shooting an assault rifle, Jimmy Kimmel firing a rocket launcher, and some guy who appears to be the most ass-kicking fast-food worker in the history of fast-food workers all into one commercial, you've got yourself an instant classic. Plus, they might be onto something with this "There's a soldier in all of us" shtick. How else do you explain Black Ops becoming the best-selling video game in U.S. history?

5. Ratchet & Clank — Weapons and gadgets not fit for this world

Weapons of mass destruction are no laughing matter. Or are they? These ads forget all about the phrase "do not try this at home" and show us that heavy artillery can be downright hilarious in the hands of a few bored idiots. Thanks to Insomniac Games, Sony Computer Entertainment, and some prolific advertising minds, tons of these "home movies" are floating around YouTube. And they all put America's Funniest Home Videos to absolute shame.

This ad always brings back memories of when Super Mario Bros. 3 launched here in the States. As a kid, how big of a deal was it when a new Mario title launched? Huge. And when that day came, was I able to handle the excitement as I waited in class for the bell to ring? Just barely. And when I was finally on my way, did I imagine all the awesome adventures I would enjoy once I stepped into those famous blue overalls? You betcha. It's all here, and it's all beautifully shot. Enjoy.

This commercial was banned not long after it aired. Other than that, I'm going to keep my mouth shut. I'd hate to ruin it for those who haven't seen this work of pure brilliance.

I’ll admit it — if I were locked away for the rest of my life with only one gaming series to play, it would not be Halo. That said, the Halo franchise does have, hands down, the greatest advertising of any video-game series ever. The first of these ads tells in 60 seconds — and with more emotion — the same story that takes every alien invasion flick nearly two hours. The second packs more adrenaline and testosterone into two minutes and 30 seconds than Michael Bay ever did — all without one single explosion.

I said it once and I'll say it again: The Halo franchise has the greatest video-game advertising of all time.

Airing on September 11, 2007, the first of the "Believe" ads showed elderly war veterans recounting their experiences of fighting alongside Master Chief, also known as John 117. The next two show the construction and a cinematic tour of a monument within the Halo universe, which was built as a memorial to Master Chief and to humanity itself.

The documentary style of the first two gives the campaign a level of believability that makes the viewer wonder if what they are seeing is actually real. What's more impressive about the monument itself is that it was actually built by hand, just as they showed in the documentary. Resembling an oversized diorama, it stretched more than 1,200 square feet wide and stood over 12 feet tall. The "Believe" website then allowed users to tour the monument for themselves and pay their respects to the soldiers who fought for the survival of all mankind.

Finally, the last ad in the series is a traditional commercial that depicts the monument in a more artistic light. The final five seconds never fail to give me chills.

There's my list. Think I missed one? Were there any you hadn't seen? Any that you hated? Loved? Please leave your comments below.

And just for good measure, here's a little something that should blow just about anybody's mind: