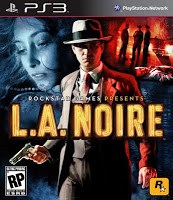 Make no mistake: L.A. Noire is a great game, one that's arguably revolutionary. It tells a compelling story and sets some new standards, but that doesn't mean it's perfect.

L.A. Noire takes place in 1947. There are plenty of WWII games, but few games if any have explored post-WWII U.S.A. It was a time when the American economy was booming and soldiers were returning home, trying to readjust to civilian life.

Anyone expecting Grand Theft Auto: 1947 will be severely disappointed. Though Rockstar published the game, co-developer Team Bondi takes a much different approach. L.A. Noire plays more like a point-and-click adventure than GTA. There are still car and foot chases and shootouts, but the bulk of the gameplay is spent combing crime scenes and speaking with people. Again, if you're an adrenaline junkie, this is probably not for you.

L.A. Noire has drawn some well-deserved comparisons to Heavy Rain and Phoenix Wright. The investigations in L.A. Noire play out very similarly to those inHeavy Rain. When speaking with suspects, players have to look for lies and inaccuracies. Players can doubt what the individual is saying (similar to pressing a witness for more details in Phoenix Wright) or accuse him or her of lying and back it with evidence (like objecting in Phoenix Wright).

Even though the game may seem like a sandbox, especially with Rockstar publishing, it's fairly linear in execution. Cole always has a case to work on. Any downtime is skipped. Players rarely see his wife and kids and there is hardly any socializing outside of work. That said, there are a few different ways to work a case. There are often a few different locations to visit, and players can usually choose the order to visit them, which will sometimes make a difference in how a case plays out.

What sets L.A. Noire apart from other game is Team Bondi's attention to detail. A snippet during a loading screen said that 90 percent of the 1947 Los Angeles in L.A. Noire was recreated to be historically accurate. The music, the radio commercials, the dress and even the way people speak is authentic.

The game has certainly gotten its share of attention if for nothing more than the new facial motion capture technology called MotionScan. In making L.A. Noire, actors' entire bodies were filmed with motion capture – including their faces. This allows the body's movement to be paired with the face's expressions.

This focus on dramatic realism is fairly unique in video games. A suspect under interrogation might flinch or look to the side when telling a lie. There is genuine emotion in the characters' faces, but that's not to say the graphics are perfect. Many of the textures inL.A. Noire look old, especially hair. There's nothing like seeing a character's exquisitely detailed face, only to have the camera pan to the side and reveal what looks like a patch of muddy carpet on the back of his head. There are also some issues with characters' lips, teeth, tongues and eyes. L.A. Noire is riddled with quirks like this that, while they don't break the game, certainly detract from its immersiveness.

For example, while reviewing case notes in a police station, I overheard an officer talking about how he wants to get a .45 so he can put criminals down in one shot. He said about four different things and then returned and went through list again. And again. And again. When walking past citizens on the street, I often overheard conversations like "Hey, isn't that the cop…" but after looking around, the person who said it was all alone and talking to nobody. My partner and I had just discussed where to go next. I told him to drive and he said "Where are we headed?" When a game strives so hard for realism, its unrealistic qualities stand out even more.

Also, don't expect to be able to identify with Cole all of the time. When it comes to dialog, a game like Mass Effect 2 allows players to steer conversation to his or her liking. In L.A. Noire, players can choose that they believe the other person is telling the truth, holding out, or lying. After choosing one of those, it's Cole's decision how to reflect that belief. More often than not he is abrasive, shouting and yelling when it's likely a little more tact and respect could produce better results.

The story in L.A. Noire is mostly excellent, though it ends somewhat abruptly. There are still some loose ends, and it seems likely that Rockstar expects players to purchase upcoming DLC. Even so, L.A. Noire is a game worth playing. Its unique take on the adventure gaming genre, impressive cast of characters and dramatic presentation warrants serious attention.