I just realized now that I've never written a self-profile for Bitmob. I've been a member for well over a year, maybe you've read some of my work. If not, its ok…I guess…

Anyway, I've seen a few self-profiles on the site, so I figured I'd do one of my own, except a little different. Because if you've read a lot of my articles, most of them are different.

Sjovic: Hello Bitmob, we are here, in a Starbucks right now talking to Bitmob Community Writer Stojan Jovic. We want to know more about this up and coming gamer/writer. So, to start, tell us about yourself; who you are, what you do, et cetera… 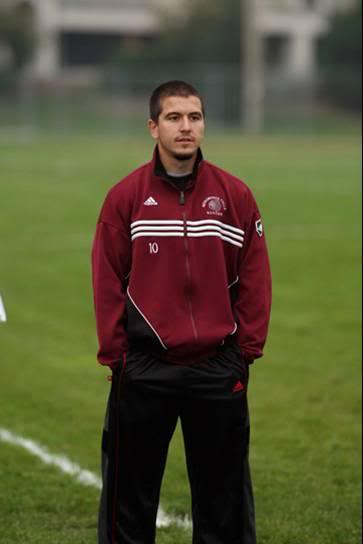 Stojan: Well, I'm 30 years old, I live in Milwaukee, Wisconsin. I have been playing soccer since I was little, still play to this day in a men's amateur league, and now I coach at a high school in the area. I also coach a traveling team in the spring. One of my other interests, besides soccer and video games, is writing.

SJovic: So how did you get your start in video games?

Stojan: Well, a kid up the road from me had a Nintendo, and needless to say I was intrigued, and spent A LOT OF TIME at his house. My mom was afraid of getting me any video game system, for fear that I'd turn into some video gamer recluse, and that I wouldn't want to play outside anymore. Well, I was over at this kid's house so often that she just bought me one anyway. Never looked back. And I didn't turn into a recluse!

SJovic: So what games were you most interested in then?

Stojan: I was mostly into Mega Man and Ninja Gaiden. I didn't care for Super Mario Brothers actually. I didn't beat the first game until, like, five years ago honestly…

Stojan: Serious. I just didn't care about it. Great game, paved the way for video games today for certain, but…just would rather be a blue robot shootin' shit, or a blue ninja slicin' shit.

SJovic: And that brings us to today…

Stojan: Yes, I've since progressed to Genesis, SNES, Gameboy, and all the others (except Dreamcast, sadly). I currently own an Xbox 360, Playstation 3, a Wii, the PSP Go, 3DS, and most recently an iPad.

SJovic: I've been thinking about getting an iPad! How do you like it?

Stojan: I haven't really explored it much yet, but it looks like it's going to be addicting once I do! I hope I don't neglect my other systems.

SJovic: So tell me, Stojan…actually, what the hell kind of name is that?

Stojan: It's my first name.

SJovic: Har har, I mean the origin. Where's it from?

Stojan: My dad gave it to me.

SJovic: Ok smart ass, what nationality is it?

Stojan: It's Serbian. My family is full-blooded, 100%. I was born and raised here, hence my American accent. Want to hear my awesome Russian accent!?

SJovic: No thanks. Anyway, Stojan, what games are you into now? What are you currently playing

Stojan: I'm all over the place, really. I can get into most genres, however I still struggle with sports games, even soccer games like FIFA.

SJovic: I would figure with your soccer experience that you'd love the FIFA series?

Stojan: Trinity? Oh man, that's my guilty pleasure. It's an RPG for the PS3. The graphics aren't that spectacular, the storyline is pretty basic, and the combat is very archaic, but I love it! But then again, I can get into games like that, low budget games. I loved Deadly Premonition. That whistle song…still get stuck in my head sometimes.

SJovic: Awesome, yeah, loved that song too. So I see that your taste in games is all over the place.

SJovic: So you love playing video games I see. And you love writing about them too?

Stojan: I like to pay close attention to what's going on in video games. I visit websites like Joystiq and Bitmob regularly, to find out what's happening. Honestly, one of my grand goals would be to work somewhere in the video game field, either in journalism, or even creating video games. I've tried my hands in coding and programming with C#, but damn that's complicated shit! I think I'd be more into story writing and dialogue. Or Creative Director. I've actually got a book I just self-published on the Kindle!

SJovic: Really? What is it?

Stojan: It's called the Second Advent. Armageddon, end of the world, that kind of stuff. One man rises up from the ashes to unite the world, who is the devil incarnate. One man, the son of man, forms a rebellion against him. It's real long. Check it out! It's a good mix of religious fiction and a Tom Clancy-esque military story.

SJovic: I will buy ten copies. So, give me your opinion and outlook on the video game scene today. What's your take on it?

Stojan: I don't think the games coming out these days are appreciated enough. It takes so much work and dedication to make a game. Granted not every game is perfect, and can be stacked up alongside some of the triple-A titles out there, but more gamers out there should start to embrace some of these that may miss their radars. I think it starts with the journalists' coverage of the games. Most gamers are stupid, mindless robots than will read through a video game magazine in ten seconds, because they want to be told what's good out there, so they can put down their $60 for something.

I think the way we review games should change, and our opinions on the games. I think publishers' treatment of their developers should improve, and I think a lot of people out there should embrace the new ways games are coming to us, like OnLive, the iPad, and the Android. If anything, these new ways that games are coming to us will help fuel the need for more triple-A titles. We can't stifle the creativity out there.

Sjovic: Great outlook, hopefully many others will embrace your ideals. Well, that's all we have folks! Thanks for reading, and thanks to Bitmob for giving up and coming writers a chance to get out there and share their views with the world!