I subscribe to EGM, Game Informer, and @Gamer magazines. Every month I become awash with news, previews, and insights into upcoming games and projects. I get to know the minds of those in the industry by reading all articles, and I read the reviews, even if I've played the games. Needless to say, I read the magazines cover to cover.

Do I make up the majority of video game magazine readers out there? That is a resounding, yell-high-on-a-mountaintop "no." I work with mostly young guys, and there are at least 50 of us at a given time in our ready room (I work on the ramp for an airline). When I bring my magazine to work to read, most of them will see it and ask to read it. They'll skim through it by looking at the pretty pictures of new games, and the review scores. That's it.

A few minutes pass after I hand it to them, and they give it back to me.

"You sure? You barely read it…" I reply, with shock. It takes me a few hours to declare that I am "done" with a magazine. Unless I'm reading Teen People.

"Naw, I just wanted to see what they rated Operation Flashpoint at…and to see if they had any pictures of the new Call of Duty."

"You should see the Battlefield 3 article spread in here, it's gonna kill Call…"

Sorry, I digress. Anyway, this tells me that for one, most readers BARELY get into the long pieces of articles in these magazines. Secondly, they don't read the entire review. They just want that number score, and maybe read why it is they assigned it. So just the bullet points.

However, they miss a key point in these reviews; a more in depth analysis as to what the game is about. I can almost guarantee that if people actually read the reviews for Fallout New Vegas, they would have read more about all its bug issues. And for some reason, it got a 84 on Metacritic! Many of the reviews for this game stated its bug issues, and the frustrations some gamers may have with them, however they seemed to have been passed up for that final score. So sometimes number scores cannot accurately define if a game is REALLY GOOD, or not.

Not to mention some reviews out there can unfairly judge a game based on comparison points. How does this FPS stack up to its competition, or how does this newest edition in this series stack up to its predecessors, that kind of stuff. We need unbiased, true-to-fact reviews of games these days to better help educate those oddball gamers that can't make a decision on their own.

We owe it to them to tell them WHY. And with very little words as possible. A game magazine reader like myself will sit down and read a long article like that, however I am not the majority magazine readership.

So here is my first piece of a revolutionary new way to review a game. Ok, maybe it's not totally revolutionary, and maybe it's not new. Maybe it's been done before, on a website or magazine I have't read yet. The only thing I hope for that it we start seeing something similar pop up in more places. Hell, even if you disagree with me on this, that works too. My idea alone cannot change the face of video game journalism. It takes a few trips through the washing machine to come out looking nice.

Not literally. Don't throw your laptops of iPads in there, I hear they don't take too well to water.

Anyway, here are my review criteria that matter MOST to gamers.

Plot/Story
Graphics
Sound (quality/amplification/etc.)
Gameplay
Fun Factor
The Closing (what is the final impression)
Fans Of This Game Will Like…

I know this sounds like it's already been done, but click over to the next page to see how I apply it to my review of L.A. Noire. You'll noticed it's streamlined with bulletpoints, making it easier to skim through, but still offers much in detail and a fair opinion on the game.

And no comparisons to other games…except in the "Fans Of This Game…" section at the end.

Let me know what you think!

Oh yeah, I don't read Teen People. I was kidding.

L.A. Noire: A Tale of History, Suspense, Adventure, and Intuition 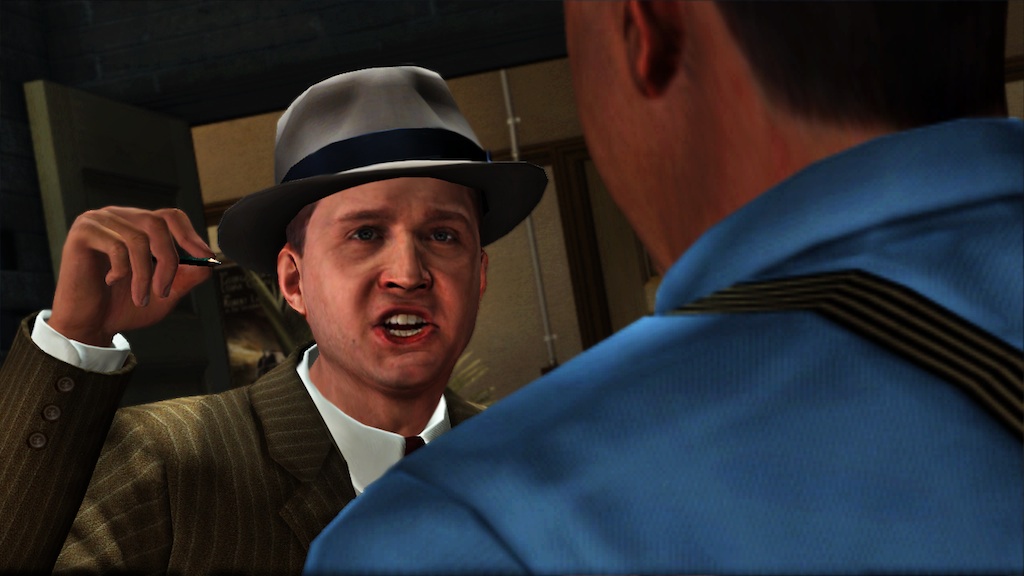 "MY PEN IS OUT OF INK! I ASK YOU AGAIN, SIR,
DO YOU HAVE ANOTHER I CAN BORROW!?"

PLOT/STORY:
You're Cole Phelps, a veteran officer from World War II who moves back home to live the post-war dream; buy a house, start a family. You start your adventure as a street cop, and after a few great busts you become a detective. You rise through the ranks (traffic, homicide, vice, and arson), solving seemingly unrelated cases to eventually uncover a massive city-wide conspiracy.

GAMEPLAY FEATURES:
-Third Person Action/Adventure, open world.
-Solve crimes by combing crime scenes for evidence.
-Interview and interrogate witnesses and suspects. Press them if you think they're telling the truth, express doubt that they hiding something important, or convince them of lying by presenting evidence.
-Chase down suspects and engage in fierce firefights in 1940s L.A. with a wide variety of weapons at your disposal.

GRAPHICS:
The best you've seen thus far, guaranteed. The setting is highly detailed, bringing the city of L.A. circa 1940 to life, as well as the cars and clothing. The facial expressions, body language and movements are all top notch, as close to real life as you can get with a revolutionary facial-mapping game engine.

SOUND:
The radio music is all circa-1940s, the voice acting rivals professional Hollywood acting, and other ambient sound effects like background conversations and traffic sounds all put you into the atmosphere real well. Most of the background music really sets the mood well, whether it be somber, suspensful, or action-packed.

GAMEPLAY:
The combat is real tight and fair, as in not overly complicated; just point and shoot. Even the hand-to-hand combat is remarkably easy to master. The driving is really tight and easy to control and maneuver through traffic, especially when you got to get to somewhere in a hurry. The enemy AI is also well done; they move and attack you realistically and without pause. Interviewing witnesses and getting information from them can be hard at times, however, requiring you to pay very close attention to who you're talking to, and how they are answering your questions.

FUN-FACTOR:
Fun in a way that it envelopes you into its world, and is hard at letting go. You get wrapped up in solving cases and finding evidence to help get you promoted within the ranks of the police force. There isn't much else to the game besides solving cases, and also stopping the occasional street crime, which are mostly run-of-the-mill robberies that end up with a few dead criminals.

CLOSING:
A great game that can last over 30 hours if you really delve into it. The overarching story will keep you guessing till the very end, and solving crimes are fun to do, granted you pay attention to your evidence and check out facial cues in your interrogations. The game, although an open-world atmosphere, can be linear most times.