I had high hopes for Child of Eden, perhaps unreasonably high.  I wanted it to be THE Kinect showpiece.  While I have been impressed with the technology, I waited for the game that used the Kinect to provide a natural, yet innovative, experience impossible without it.  Think Elite Beat Agents and its use of the DS's touch screen.  We're not quite there yet. 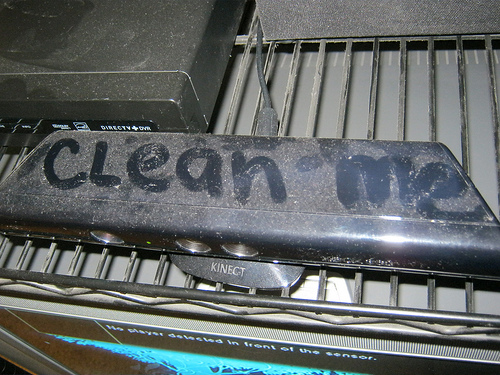 Child of Eden can be played using the standard controller, but it is advertised on-box as "Better with Kinect Sensor."  As a starting point, Child of Eden is an on-rails shooter designed by Tetsuya Mizuguchi and Q Entertainment.  Like Rez HD and Lumines before it, Child of Eden combines music and gameplay in such way that the two not only support but enhance the other.  Described as synesthesia, the gamer creates a very real and very unique soundtrack through on-screen actions.

The gameplay itself is very basic.  The player controls an on-screen reticule with the analog stick or alternatively hand motions to aim.  There are three primary modes of attack: a lock-on feature that allows the player to tag up to eight items before releasing a single blast to eliminate each; a rapid, single fire gun; and Euphoria, a smart-bomb attack that clears the screen of enemies.  Accomplished by "A," "RT," and "B" on the controller respectively, I used the Kinect control scheme utilizing the right hand for "A,", left hand for "RT," and raising both hands for "B."

Child of Eden does distinguish the control methods, offering separate leaderboards based on the gamer's selection.  The reticule appears larger when using the Kinect option.  Although I have completed all five archives using the Kinect sensor and the first three using the controller, it's still too early for me to discern whether scores are equivalent.  For what it's worth, my scores have been higher using the former.

I like the Kinect control.  While not groundbreaking (in fact, the game is Rez II which is not a bad thing) in its implementation, Kinect use is natural.  Aiming is balanced as challenging but responsive.  The float of the reticule makes allowances for a not-quite-precise but effective movement covering the entire screen.  The biggest deficiency with Kinect as an input comes from the sloppiness with releasing the shot after locking on.  Flicking the left hand forward to release the shot was not as reliable as one would want it to be.  Frustration can be added knowing that a score component is based upon the timing of the release and its synchronization to the music's beat.  The imprecision is not a deal breaker.  In fact, in the Kinect collection, I would argue that Child of Eden's Kinect control comfortably sits at or near the top of doing what I want to do when I want to do it. 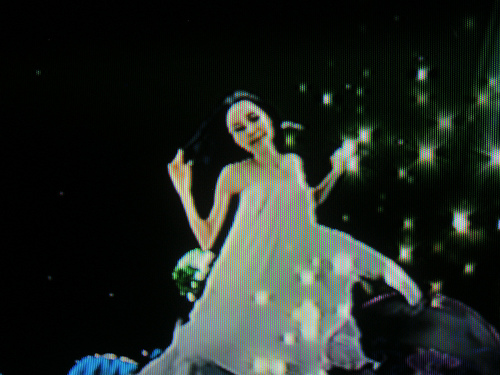 Where I believe the controller counterpart exceeds the Kinect sensor is not in its use as an input, but rather in its ability as an output.  I think the game designers do the game a great disservice by not enabling controller vibration as a default setting.  However, once on, the game reaches the gamer at a different, deeper level.  The pulse of the music echoes not only through one's ears but through one's hands.  Engaging senses becomes reality through not only sight and sound but feel and touch.  And while there is an argument that there is a physicality associated with the Kinect control, it is weightless and detached.  Oddly, controller vibration creates a more visceral dynamic than using one's body as controller.

To be fair, there is an option to activate controller vibration (up to four controllers) while using the Kinect sensor.  However, in addition to the strange looks that may result from placing vibrating controllers in your pockets, feeling the music through my hands was a more effective method of communicating the movement-sound synesthesia the game strives to create.

Ultimately, I believe the Kinect sensor offers a unique though not quite better experience when playing Child of Eden.  The game shows promise for what the technology can accomplish, but it also highlights some of the difficulties that result from controller-less play.