You are flying around with some low-end frigate and you hear about this cool ship that is so much better. You hurry to look it up on and see if you have the necessary skills to fly it. You just need to increase one skill to level 3. Well, that will take about seven hours, so you check to  see how much money you’ll need. You have 1.5 million ISK, and you need another million to buy the ship. You spend the a few hours running missions, or maybe mining, to get enough ISK to buy this fantastic new ship.

At last, you have enough ISK to buy it. You fly into a station and head to the market. You buy it excitedly, and fit it with the guns from your old frigate. You should probably buy some bigger guns. You look up some nicer guns, and they will cost you another million ISK. You head back out and run some more missions. The grind is tedious, but this ship is so cool that you need to have some awesome guns on it. The guns are bought, and this is the proudest moment of your life. Just look at how bad-ass this thing is. You fly out into space looking for adventure.

Adventure finds you in the form of a troll flying a ship better than yours. He fires off one round and hours of your life, hours invested in your shiny ship, are gone. Your ship explodes, and the last words it heard coming from the mouth of it’s destroyer we’re “lolz”.

Actually, losing a few hours isn’t that bad. There are some ships that can take you a lot longer to buy. Sometimes you’ll need to spend weeks, maybe even months, getting the skills needed to fly a ship. Then you’ll need millions of ISK, maybe even billions, for some ships. EVE's biggest ships have to be made by huge corporations, you can’t just buy them at the local market, and that can take months. It is possible to lose an entire group’s collective effort that is worth months and months of time.


The facts are that anything, and everything, the you fly or build can, and probably will be, destroyed. Maybe it will be by another player, or maybe it will be NPCs. It might take months for someone to blow up your ship, or it be destroyed as soon as you undock. You are never safe.

This has led to the creation of a common saying in the EVE community, “Don’t fly what you can't afford to lose.” If you depend on mining to make your money, and all you have is 10 million ISK, don’t buy a mining barge that costs 9 million. If you lose that barge, you won’t have any way to buy another one, and you’ll be shit out of luck. 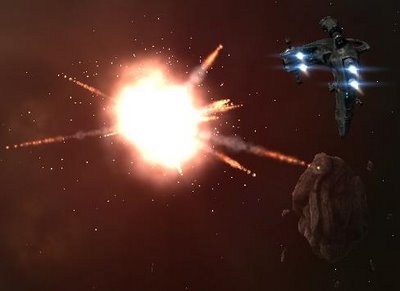 Some players will try and only buy ships that they have double the ISK for. So if the ship costs 10 million, they won’t but it until they have 20 million. This is still rather risky, and a lot of experienced players will stockpile 3 or 4 times the amount that their ships are worth, just for a safety net.

As you can expect, I didn’t take this rule to heart until it actually happened to me. I was spending days mining to get my first mining barge. I was so incredibly happy with it. I decided that fitting it with top of the line mining lasers, and some very expensive modules to expand my cargohold, would be a good idea. Once I was done fitting the barge I didn’t have any money left. I had even sold my old mining frigate to help me get some extra ISK. I went out mining, and I knew that soon I would have all kinds of ISK. Unfortunately, I never had the chance to mine for more than an hour. Everything was quite for about 45 minutes, so I started watching some TV while I mined. Next thing I know, I am being attacked by a gang of NPC pirates. My shields are gone, and I am taking some serious hull damage. I hit the warp button to get the hell out of Dodge, but mining barges are slow beasts and it never stood a chance. My ship was gone.

I logged out, and it was about three weeks before I came back to EVE. I had learned my lesson. Ships will come and go, and you should be prepared to come back from a loss. Both with extra ISK, and a strong resistance to crying and throwing a hissy-fit.