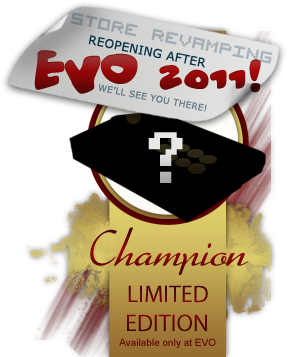 Those recently seeking to purchase their very own custom-made arcade stick from Project GiantSword may have noticed that the website’s store is currently closed for a surprise revamping. To find out exactly what kind of changes are going on at GiantSword and why the store is unavailable, I got in touch with Montoia and Valbjorn, the artisans behind the custom sticks, for some updates on what fighting-game enthusiasts can expect from PGS in the near future.

See you at EVO

This year, PGS will be present at the EVO 2011 World Finals, taking place at the Rio Casino and Resort in Las Vegas from July 29 to 31. The plan is to tag along with Clockw0rk, one of the top Marvel Vs. Capcom 3 players in the world and owner of his very own custom Legend stick, to promote their work and start a dialogue with the community about custom arcade sticks.

In addition, EVO 2011 will see the launch of the limited-edition Champion stick, available only through in-person orders during the tournament. While Montoia and Valbjorn want to leave the exact details of the Champion package a surprise, they were able to share a few tidbits about what stick buyers can expect.

In contrast with the Legend package, which offers various customization options, the Champion is a pre-made stick with a standard 8-button Viewlix layout, a choice of square or octagonal stick gate, a superior paint job, and other special customizations not seen in previous GiantSword works. As with all PGS sticks, the Champion will come with a dual PCB setup, allowing it to function on Xbox 360, PlayStation 3, and PC platforms with ease.

“The Champion is our rendition of what we think represents the champions of EVO,” says Montoia. “We were inspired by epic, classic games in its creation.” Given the quality of previous PGS sticks, the exclusive Champion is shaping up to be a tempting purchase. 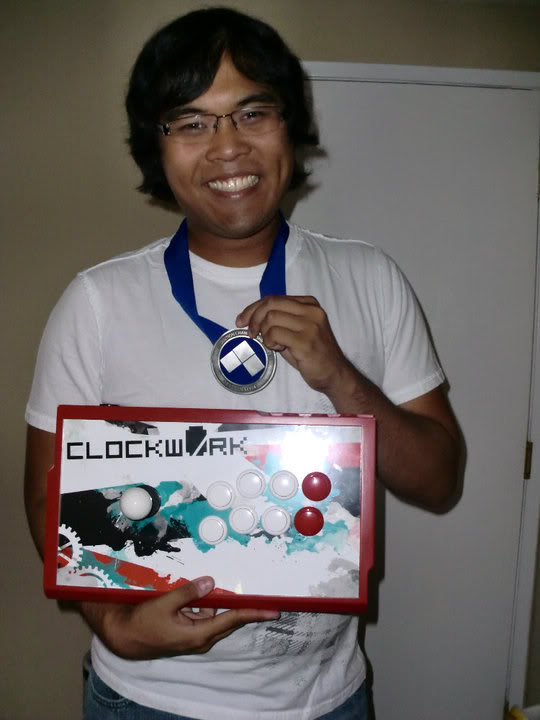 Part of the reason that the PGS store is currently down, aside from a flood of custom orders and preparations for EVO, is the introduction of Relics, a new line of premade, unique sticks.

‘We've found that our sticks come out the best when we just go wild with them on our own,” explains Montoia. “So we are going to start designing sticks on our own time, instead of only making them to order with direction from the customer.”

Comparable in quality to the Legend package, each Relics stick will differ slightly in case design and features, based on where the duo’s creative juices take them. The goal is to create inspired works of art in order to really push what people expect from fight sticks. Customers can also look forward to Montoia’s original hand-drawn artwork, which will be featured heavily on the Relics line.

It’s the little things that count

In addition to the Champion and Relics lines, PGS has introduced some small, yet notable improvements to the previously offered Rogue, Fighter and Legend packages — improvements that have snuck their way into a few lucky orders, but will soon become standard features. For starters, each stick will come with a custom-colored USB cord to match the overall design and will be sturdier than previously used cables.

Additionally, a new internal support system promises to improve the structural integrity in each stick, and will result in increased weight and a more solid feel. Symmetrical non-slip feet, brass threaded inserts for the feet screws, and the inclusion of grip tape on the inside of the ledge of the joystick round out the list of minor, yet notable improvements to the designs. Whether customers notice these change or not, it’s clear to the discerning eye just how much love goes into each item.

Fight-stick makers to the stars

Previously, PGS was noted for having designed Clockw0rk’s custom stick. During our talk, Montoia and Valbjorn revealed that they have been hard at work crafting custom sticks for other notable players, including Mike Ross, Combofiend, and the East Coast legend himself, Justin Wong. PGS also reports that G4TV has them to create official G4 sticks to be featured in the station’s fighting-game-related programming, including the recently launched Fightin’ Words.

Of all of the commissioned sticks, Justin’s is the furthest along, and is reportedly set to include Sanwa parts, a standard Viewlix button layout, and a dark green electronic theme.

Finally, PGS is currently in the process of relocating its workshop to Los Angeles in order to be closer to fighting-game community events and gatherings. However, while the move will likely involve investing in some larger machinery and tools to improve work speed, the folks at PGS currently has no plans to expand their team.

“We consider each of our sticks to be a work of art, rather than a product,” Montoia explains. “And with that said, it is very difficult to have someone else create in your name.” For the time being, at least, the PGS team-member count will remain at two.

There are also no plans in the near future to experiment with casing material types other than the MDF construction currently used in all PGS sticks. The overall sturdiness provided, plus the reduced chance of sending case vibrations to the buttons, are the primary reasons cited. In other words, don’t expect to see Plexiglass GiantSwords anytime soon.

This just goes to show that GiantSwords are serious business, and not just a simple pastime for their noble craftspeople. As fighting games continue their long-awaited Renaissance, it’s good to know that today’s digital warriors have such carefully constructed weapons to take with them into battle.