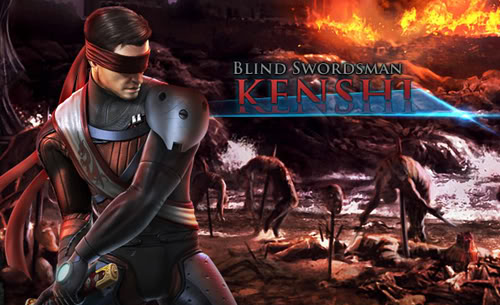 This installment of Mortal Kombat DLC Breakdown introduces Kenshi, who though arriving late on Xbox Live due to being unable to find the door, is now available on both platforms. Find him on the Xbox Live Marketplace for 400 Microsoft Points (or as part of the 1200 point Season Pass plan) and on Playstation Network for $4.99.

Once a proud, arrogant warrior who lived only to prove his strength, Kenshi was easily taken in by a disguised Shang Tsung. The sorcerer played on Kenshi’s pride, promising him great power in the sealed sword Sento. But when Kenshi released the sword from its tomb, the trapped spirits that Shang Tsung sought to absorb blinded Kenshi, and Shang Tsung left Kenshi alone to die.

However, those warrior spirits were Kenshi’s ancestors, and the sentient sword Sento recognized Kenshi as a descendant of its former masters. It spoke to him and guided him out of the tomb.

Now, blind and driven by hatred, Kenshi wields Sento and the telekinetic powers that it affords him on his quest to reclaim his ancestor’s spirits from Shang Tsung’s grasp and ultimately have his revenge.

Mortal Kombat: Deadly Alliance marked the series’ first true 3D entry, and with that change in perspective came some massive roster changes. Almost half of the characters in Deadly Alliance were new, and among them stood Kenshi, the blind swordsman.

Originally called Blind Gi, then Blind Kenshi, Kenshi is notable in that he is the second character in the Mortal Kombat universe to use telekinesis, replacing Ermac as the series’ prime mind-mover. Interestingly enough, it was Ermac himself who taught Kenshi his telekinetic powers in the original timeline as thanks for freeing him from Shao Kahn’s control. However, in the new timeline, Ermac remains evil throughout, so it’s implied through combat and backstory tidbits that, in this continuity, Kenshi’s power comes from his sword.

Kenshi can best be described as an odd marriage of existing characters with his own flair. His fighting style, comprised heavily of sword-based attacks, often produces psychic images that operate similarly to Noob Saibot’s shadow clone attacks, though they largely aren’t effective from long range. His often-peculiar normals, combined with his projectile reflect, borrow from Nightwolf. Thankfully, Kenshi is much more than the sum of his parts, and though he shares similarities with other cast members, he definitely has his own charm.

Kenshi takes a little bit of time to get used to. His Front Punch, usually a quick jab with most characters, is a slow-recovering backhand that may throw players off. Similarly, his sweep kick is relatively unique in that he remains standing while performing it, giving him no vertical clearance. Blade Stab is a quick Medium-hitting attack with good range that works well as a ranged anti-air technique or turtle crusher. His Blade Swipe attack is similarly quick useful, leading into his basic bread and butter combos.

Speaking of combos, Kenshi doesn’t have an exhaustive list of commands like some of the more complex characters, but his technical level and execution are just as high. In Telekinetic Rush, Blind Justice, and Off Balance, Kenshi has three basic combos that start from two Front Punch attacks. Off Balance can be canceled into a special, and is arguably the most effective of the three, but at least beginners and button mashers have the option of using simple strings to get going at the early stages.

Absentminded is probably Kenshi’s greatest tool, as it ends in a launcher, allowing for more juggling punishment afterwards. Shortsighted is a variation of Absentminded that ends in a Medium attack, which may encourage opponents to block his strings high to keep from being caught in a mixup. This can lead the way for Brainpower, Kenshi’s only Low-starting combo attack.

Kenshi relies heavily on these mixup games, but unfortunately, the extent of his mixups occur at the end of combo strings. Blade Stab and Windmill, his basic Medium attacks, cannot be followed up with additional hits, and aside from Brainpower, all of Kenshi’s strings begin with High hits. Some definite planning and liberal use of special attacks is necessary to keep Kenshi’s pressure game going.

In terms of specials, Kenshi’s techniques are quick and strong, but have long recovery times, making them somewhat unsafe if abused. Tele-Flurry is an invisible projectile attack that can strike instantly from across the screen, but can be easily punished on block by teleporting characters, and is unsafe at medium range. Though great for surprise attacks, it has odd hitbox issues, and will completely miss Sektor as he performs his vertical missile attack. It’s also possible to dash through Tele-Flurry with proper timing, making it an odd variation on the standard projectile that should be used with care.

Telekinetic Slash is Kenshi’s version of the “choose one of three distances” ranged attack. It causes a psychic projection to slash from the sky at the desired point, hitting Medium and controlling space decently. Unfortunately, long range isn’t where Kenshi excels; players need to keep as close as possible to get the most out of Kenshi, using Blade Reflect and dash blocking to aid his forward advance.

Once close, Kenshi can use Rising Karma as an opener or a combo extender to launch the enemy into the air. It’s a solid anti-air technique, but shares the long recovery time of his other techniques. Spirit Charge is reminiscent of Noob Saibot, sending out a psychic projection to shoulder smash the enemy, but its range is comparatively shorter. However, the EX version goes halfway across the screen, making it ideal for finishing some of his trickier combos.

Finally, there’s Soul Blade, Kenshi’s X-Ray attack. Going against Kenshi’s close-range focus, Soul Blade is a projectile. Though it initially looks like an upward slash, it travels fast and straight, so smart players can use it to trick their opponents. Tack it into the end of short launch combos for the best effect.

With his tricky execution, Kenshi is a beast in the hands of a master player. Newbies will have some issues with his lack of abuseable moves and propensity for long recovery times, but with precision, he can deal some very respectable damage. Distance control is key with Kenshi; many of his best juggle attacks leave the enemy out of his punishment zone, so pairing him with a long-ranged fighter in Tag battles, or working on keeping him close with dash blocking when solo, is extremely important to his game. Overall, if you like fancy footwork and sudden bursts of action, Kenshi just may be the character you’re looking for.