Strange Steam is where I talk about games that might be older, weird, or just under appreciated. These games aren’t bad, but they might not be very good either. 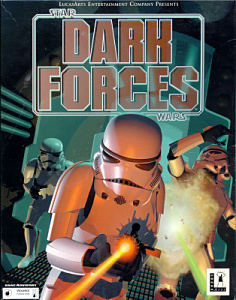 I didn’t choose to do Dark Forces this week just because it’s a classic shooter, I picked it because I want to do the whole Star Wars: Jedi Knight saga. The later entries into the series will provide me with endless amounts of interesting fodder, but let’s take it one game at a time.

Star Wars: Dark Forces, is an Doom era shooter in which you play as Kyle Katarn, a mercenary turned rebel, who is trying to stop the Empire from building an army of Dark Troopers. Dark Forces is one of the first shooters that let you look up and down, which is something that we just assume that every shooter has always done.

The cinematic cutscenes in Dark Forces remind me a lot of old Cinemaware games like Defender of the Crown or Rocket Ranger. You ears will be filled with the sounds of 16-bit music trying its hardest to sound like a symphony orchestra. The visuals are gloriously dated, but they are still highly amusing to look at. What doesn’t hold up well at all is the way the actual game looks and controls. Thankfully, a group of modders have taken care of this by allowing higher resolutions and adding mouse look. Once you can play it like a normal modern shooter, you’ll find that the level design still holds up pretty well.

There are some flaws, or course, and what’s funny is that it’s still things that shooters get wrong today. It’s not always clear what you need to do, or where you need to go. There is a mini-map, but there are no markers on it showing you where you need to go. I found myself wandering around blindly until I got lucky. This isn’t really that awful, I would rather feel lost than to have a dude with a yellow pointer over his head lead me around.


When you die in a modern shooter, you have to restart at a checkpoint. In Dark Forces you have a Mario style life system. When you die, you go back to a check point, and if you run out of lives you have to restart the entire level. The bad part about this is that when you run out of lives, you can only start over with one life. This can make clearing the later levels in the game frustrating. 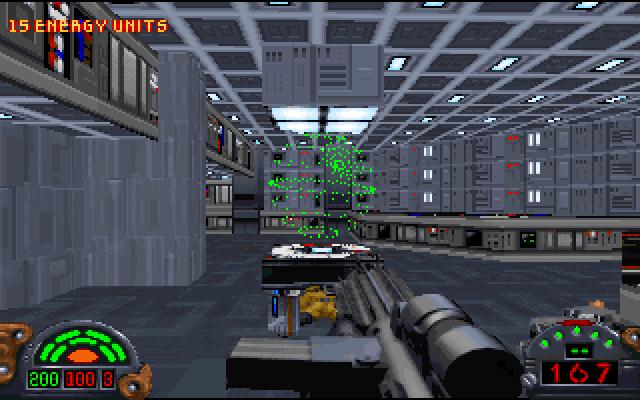 One thing that hasn’t changed in shooters at all is the lame stories. You play as Kyle Katarn, and later on in the franchise he might become important, but here he is just some mercenary dude (Hey! Let’s make a shooter where you play as a mercenary! No one ever does that!) with a made up connection to the movies. He stole the plans for the Death Star as a job for the Rebels (SPOILER ALERT) so they could blow it up. A year later the Rebels thought he was such a badass that they should hire him again. Kyle’s parents were killed by the Empire, so of course he signs up to fight them. He learns of a secret project to make Dark Troopers, another made up thing, which are a super soldier that will wipe out the rebels. Kyle is all like, “That’s not cool.”, and he went to stop the Dark Troopers from being made. Being the total bad-ass that he is, Kyle manages to successfully blow up this dude’s ship were the Dark Troopers were being made. The universe was saved!

For the love of Pete, why didn’t someone at some point in the game’s development stop and decide to re-brand the series. If they want to call it Jedi Knight, than just retcon the first game as Jedi Knight: Dark Forces, and always use Jedi Knight to kick off the name. And why Jedi Knight II? We have a total of four games using Jedi Knight at the start of the title, and only one has a number? Seriously? Oh, and did we really need to use the word “Jedi” twice in two of these titles? Here is how they should have titled the games:

And help avoid confusion they could have just slapped a some words on the front of the box saying, “The fourth chapter in the Jedi Knight Saga!”, then we could all figure out which game we we’re supposed to buy next. I can guarantee you that some poor guy played Jedi Outcast before he played Dark Forces II.
Are there any other game franchises with naming systems that are this bad? You should share them in the comments if you can think of any.