Kid wakes up. Nothing's left of his world, so he heads for the Bastion. They told people to go there if anything went wrong. Turns out they were a mite optimistic.

I'm paraphrasing slightly. Done that a lot since Greg Kasavin handed me a pair of earphones at the Game Developer's Conference and offered me a go at Bastion, the game he wrote. It didn't have a publisher or a release date then. Now it holds the pole position in Xbox Live's Summer of Arcade lineup.

He insisted on the headphones. Good thing, too. 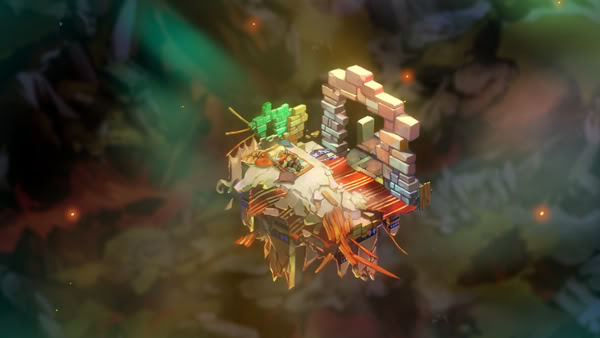 Hope he doesn't roll over.

If you want the bullet points, Bastion's a fantasy, isometric, action/role-playing game, and the first project out of indie developer SuperGiant Games. When I told people about Bastion — and I told a lot of people since my first sample — I never led off with any of that. I just said it's fully narrated by a guy with a whisky-soaked voice, and he reacts to what you're doing in the game. Start smashing up boxes on a loot hunt, and narrator Rucks talks about the Kid letting off some steam.

The response I generally got back? "Doesn't that get kinda old after a while?" No. I beat Bastion days ago, and that voice is still stuck in my head. It's welcome to stay as long as it likes. The narration doesn't get old…it gets better. Because even when Rucks addresses other people, truth is he's always talking directly to you. And you start reacting to him.

It's real tough to do a voiceover narration well, but Kasavin's script is a precision instrument. Everything's tight, short, and sharp, like a good, pulpy Dashiell Hammett yarn. The game doesn't stop to explain itself, either. Rucks just starts talking as you work, adding context to whatever you're doing. You don't pick up a weapon. You find an old friend.

Depth and tone flows out of Rucks' storytelling. With one exception at the very end, he controls the entire perspective on what's going on and why. That makes things pretty complicated if you stop trusting him. 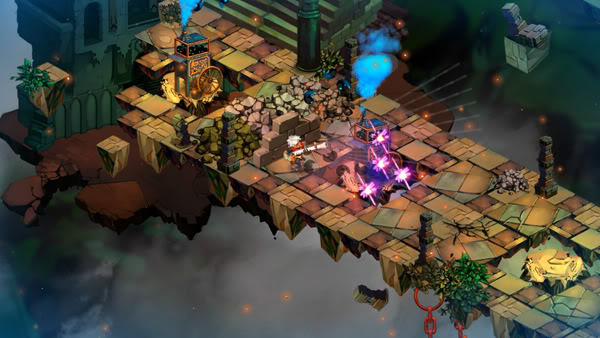 No post-apocalyptic setting is complete without shotguns.

See, sometimes Rucks can't watch the Kid, so he just guesses what's happening…and he gets a few details wrong. Makes you wonder what else he's getting wrong. And for a man who does all the talking, you might get the sense he's holding a few things back. Oh yeah, Rucks has an agenda. Maybe you'll agree with it. People do get desperate after an Armageddon.

They call it the Calamity. Rucks tells you about it in pieces. It destroyed the Cael civilization in a flash and didn't do the neighboring Urs any favors, either. The Bastion (your hub world) can fix things up right, so Rucks sends the Kid out to find the components they need to activate it. Sounds like a good idea, right?

Well, I don't mind telling you that as things came to a head, I repeatedly called Rucks a son of a bitch. Out loud. In my living room. That's not to say he was wrong — only that I disagreed. I ran into a few others who objected, too. But by that point, Rucks started passing out super weapons. Almost felt guilty using 'em. 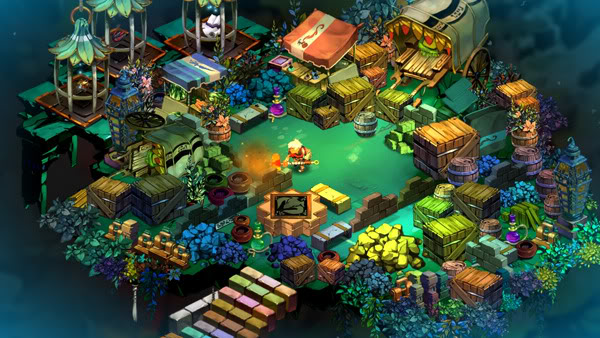 By the power of Thor!

It's not a tough game — a Halo-esque skulls system lets you up the challenge in specific ways — but the choices Bastion hits you with make it incredibly compelling. Forward or back, forgive or condemn, death or life. No wrong answers, either…just different perspectives. And the decisions you make all come back down to Rucks; how much you believe in him, how much faith you carry, and any baggage you bring along for the ride.

I can't say I found the resolution completely satisfying, but I'm less forgiving than most. That's my baggage. I will say that narratively, this $15 downloadable ranks right up there with the likes of BioShock, Mass Effect, Heavy Rain, and Portal, and in some ways surpasses them. Bastion spun me a story and let me decide how far to buy into one man's truth. That's when it became my story…and my game.