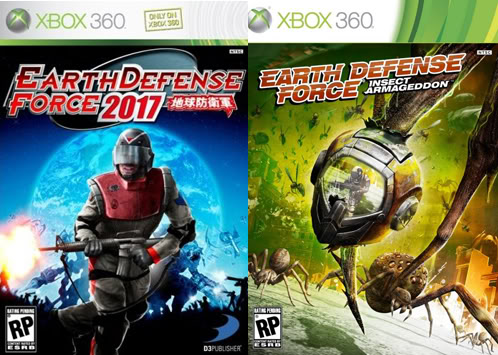 Earth Defense Force: Insect Armageddon, the first US-developed entry in the cult series, is as simple, fun, and frantic as its predecessor, Earth Defense Force 2017. It won’t wow you with deep narrative, and the gameplay can get repetitive if you’re not the loot whore type, but as far as multiplayer shooters go, you could do a lot worse this summer.

While EDF 2017 took place in Japan, the fighting in IA takes place on American soil, which means this time, it’s personal. But can Lightning Alpha, the new player-controlled squad leader of the EDF resistance, adequately fill the bug juice-stained shoes of the captain of EDF 2017’s Storm 1?

Lightning Alpha’s missions take place outdoors in New Detroit. As the game goes on, it starts to look like old Detroit on account of all of the collateral damage you cause. Your narrator even makes the old Detroit reference herself, marking a new high point in social commentary in game writing. From the residential and industrial sectors of town, to the downtown core, Lightning covers all of the expected municipal bases while maintaining cell phone coverage.

Storm 1, on the other hand, not only fought to save Tokyo, but he also hit up the Japanese countryside, several underground hives, and even a beach. Why save a beach? Because the bugs happened to be there, that’s why. Storm 1 didn’t need a reason to go somewhere and shoot bugs other than the fact that there were bugs there to shoot. Lightning could learn a lot from Storm’s ganbare mentality.

Lightning’s wardrobe consists of four unique armor sets, each suited for different situations. The Trooper is a basic set of assault armor. Battle armor is slow and packs the heaviest protection and weaponry. Jet armor zips around the battlefield, stinging enemies with its energy-based weapons and taking to the skies to avoid damage. Finally, there’s the Tactical setup, which offers moderate protection, quirky weapons, and deployable turrets. Lightning can also level up each armor suit to increase its hit points and unlock new perks.

Storm 1 didn’t need all that fancy, new age technological crap. He wore the classic Toho-inspired white padded jumpsuit, a flak vest, and motorcycle helmet that took down Godzilla back when Lightning was still an itch in his father’s crotch. Storm 1 remembers his roots. And when it came time to upgrade his protection? Storm 1 just picked up flak vests dropped by fallen enemies, each one increasing his hit points by one. His armor counter went up to 9999, but that’s only because it couldn’t keep track of how awesome he was, as he could carry as many as he wanted. Would you mess with a guy who runs at enemies wearing over 10,000 lbs of Kevlar and titanium? Maybe if Lightning had the same knee strength as Storm 1, he wouldn’t run so slow in his cute little Battle armor. 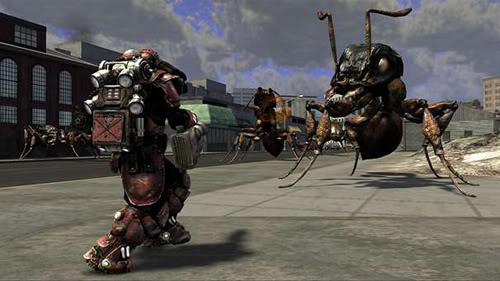 Why so slow, Lightning?

Each of Lightning’s four armor sets comes with its own weapons selection, ranging from simple assault rifles to missile launchers and homing shotguns. Weapons are divided into tiers, and most can be purchased with credits earned by killing insects once the appropriate armor level is attained.

Storm 1 didn’t need to switch armor to use whatever weapon he had handy. If Storm 1 had a gun, he would use it. Nobody tells Storm 1 what he’s cleared to fire. He didn’t buy his weapons from a fancy shop, either. He kept the three most basic guns of his collection of 150 tools of destruction and gave the rest to his enemies, with the understanding that he would have to kill them to get them back. Why? Because alien invasions are no fun if they’re too easy. He even had the stones to come at giant ants with smoke bombs, a welding torch, and a grenade that was so heavy, even he couldn’t throw it more than two feet. Lightning would be much more inspiring as a commander if he had half the guts that Storm 1 had.

Lightning’s enemies are comprised of insects, mechs, gunships, and flying saucers. Storm 1 fought pretty much the same menagerie of extraterrestrial invaders, but his were three times as large. Real soldiers fight the biggest ants, and leave the seven foot-long ones for the children to deal with.

Oh, and Storm 1 got to fight Godzilla.

Strike Force Lightning is a tight unit; each of its soldiers is a hardy, capable fighter who can revive squad mates and lay down impressive damage. Lightning Alpha heads into battle with two of these trusty companions, though he does receive assistance from some other mobilized forces from time to time.

When you’re a one-man army like Storm 1, however, you don’t need friends. One Storm squad is equal to the entire alien race, so to make it a fair fight, Storm 1 staffed his army with paper-thin, ineffectual fodder that screamed very loudly when he shot them in the spine. Why would he do such a thing? To make sure the others stayed in line and died when they were told. Storm 1 also had a standing Do Not Resuscitate order in his unit, so if he should fall in battle, so would Earth. Those are the stakes that inspire somebody to run at a mile-long flying saucer with an assault rifle and a dream. 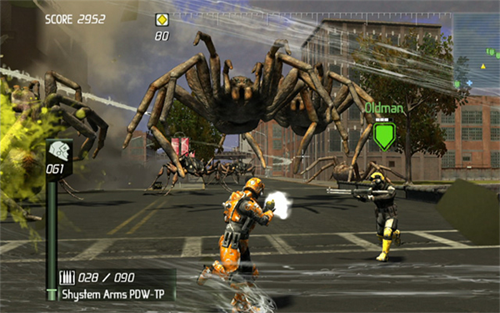 Don't worry. If you fall, Oldman is there to pick you back up. Like training wheels!

Lightning gets help from turrets, a three-seater tank, and a massive battle mech. Storm 1 also had a tank, but it only had enough room for his genius. His battle mech was notable because it took almost two minutes for it to turn around. While some may consider this a disadvantage, Storm 1 never noticed it. He never turned his back to his enemies, so the slow turn speed never entered into the equation. He rounded out his collection of rides with a near-useless speeder bike and a helicopter that was so difficult to fly that it caused more deaths to the EDF forces than the aliens did. This only served to reinforce the notion that aliens are best fought face-to-face in the muck and grime, not from the comfort of a flying tin can.

Jet armor, we’re looking at you.

During his New Detroit constitutional, Lightning Alpha investigated and self-destructed several downed Landers, bolstered the front lines, killed a giant daddy long legs and an ant queen, set up a nuclear bomb that didn’t actually go off, and ran like a scared dog from the alien mother ship.

Storm 1 invaded and destroyed multiple ant hives, killed Godzilla roughly four times, murdered multiple ant queens, and took down the alien mother ship all by himself. You don’t need to be an HR specialist to see who has the more impressive resume, here. 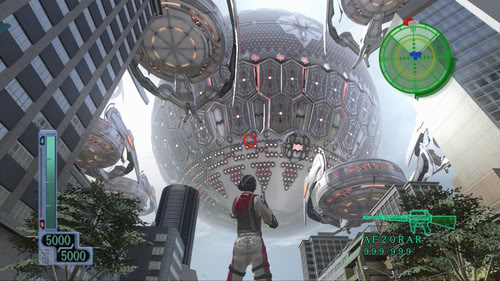 Yeah, I can blow that up.

While Storm 1 may appear to be the clear winner in this bug squashing competition, the real winner is you, the player! Between EDF 2017 and Insect Armageddon, you have countless hours of blasting ahead, provided you’re able to survive the fall from your high horse that is required to enjoy the pulpiest gameplay currently available. Guys like Tim from Braid can prance around and pontificate about nuclear war, but Storm 1 and Lightning Alpha are out there making it happen.