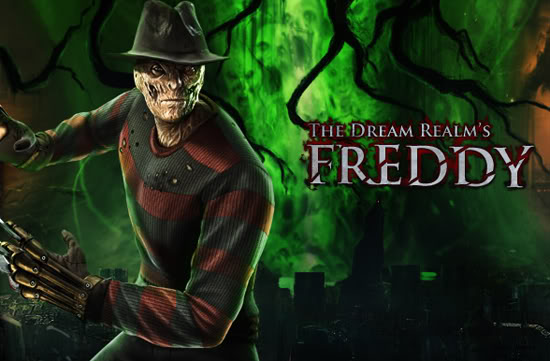 This installment of Mortal Kombat DLC Breakdown covers Freddy Krueger, who is now available on the Xbox 360 and PlayStation 3. Find him on the Xbox Live Marketplace for 400 Microsoft Points (or as part of the 1200 point Season Pass plan) and on the Playstation Network for $4.99. Additionally, Freddy is now a part of the $14.99 Warrior Bundle on PSN, a pack that includes all previous DLC combatants.

When Shao Kahn made his bid for the souls of Earthrealm, Freddy Krueger stepped in, believing that those souls were his and his alone. Freddy invaded Kahn’s dreams, but the emperor proved too powerful and succeeded in pulling Freddy out of the Dream Realm and into the mortal world.

Shao Kahn easily defeated the mortal Freddy and left him for dead. Realizing that he would need more strength, Freddy crafted a new pair of demonic razor gloves to aid him in his quest for revenge. Sure, why not?

Freddy Krueger’s announcement as the latest DLC fighter for Mortal Kombat definitely turned some heads. One of the most iconic figures of the horror genre, Freddy is on loan from Netherrealm Studios’ owner, Warner Bros., and serves as an interesting tie-in property.

Freddy first appeared in the 1984 horror film A Nightmare on Elm Street. A child murderer who was burned to death by vengeful parents, Freddy returned from the grave as a horribly disfigured apparition that proceeded to haunt the dreams of the children of Elm Street. With his razor-sharp glove and equally keen one-liners, Freddy terrified and entertained a generation of horror fans and contributed heavily to the popularity of the slasher sub-genre.

Though his inclusion in Mortal Kombat could be seen as a joke, Freddy is a fighter that should be taken seriously. He’s one of the most powerful characters in the game and barring any patches that tone down his abilities he’ll likely remain that way.

Freddy’s normal moves aren’t insanely fast, but he possesses all of the necessary tools to play a mean mix-up game. Double Swipe is Freddy’s bread-and-butter medium attack, good for opening up crouching opponents but especially notable because it bounces an airborne opponent off of the ground. So it's a perfect combo extender, especially when combined with something simple like Playing With Power, a quick combo that juggles effectively. He can also start a low combo with Low Blow, giving him the basic options needed for confusing opponents.

Freddy’s combo attacks are also fairly standard, with In Your Dreams acting as a basic launcher and Kung Fu This Bitch ending in a medium. His other techniques have some use, but players will likely end up defaulting to these two for long combos and mind games.

From here, Freddy’s tools get a lot more specialized — and a lot more terrifying in the right hands. Nightmare Stance is a posture change that functions similarly to Sonya’s Military Stance and Skarlet’s dashes, and like those two characters, Freddy can cancel into Nightmare Stance mid-combo to vary his pressure and choose his level of attack.

When activated, Nightmare Stance causes Freddy to drop back and dig his claw into the ground while he waits for the next input. From there, Front Punch is a launching claw slash, Back Punch is a powerful medium that causes an untechable knockdown, Front Kick is a low slash, and Back Kick cancels the stance, as does Block. The flexibility of Nightmare Stance allows Freddy to add middle and low pressure to any one of his combos, with the added benefit of stepping back out of harm’s way for a second before striking. This swagger is quick enough to be used on reaction, making it a viable option for a pseudo-parry.

But wait, there’s more! Freddy’s assortment of special moves seems almost unfair when added to his penchant for high/low mix-ups. Hell Spike is the typical "choose your range" move and comes in close, near, and far varieties. Each version launches and works inside or outside of a combo to start some big damage. The Enhanced version tracks regardless of the button used, and has the added effect of standing an enemy back up. It even works on airborne opponents.

So a Freddy player can end a combo with a close Hell Spike, juggle with near, throw in the Enhanced version to set the falling opponent back on his feet, and end with the far version! These juggle tactics are similar to Shang Tsung’s ground fireballs but are much faster and give Freddy some very scary space control options.

The insanity doesn’t end there. At range, Freddy can choose between Glove Toss and Freddy Fingers, a pair of very fast projectiles. Freddy Fingers hits low and works similarly to Kung Lao’s low hat toss for combo shenanigans. Spamming these attacks too much leaves Freddy open to punishment from teleporting characters, but Freddy has his own means of magical conveyance. Dream Shift Away and Towards instantly places Freddy at a fixed distance from from his current position. You can cancel into both from the middle of a blocked combo string to teleport through an enemy for staggered pressure, or away from an opponent to open up projectile games.

Not broken enough? How about Sweet Dreams, a tracking, hard-to-see glob of green goo that falls from the sky and incapacitates enemies for a few seconds when it hits? Combined with Hell Spike and Dream Shift, a single Sweet Dreams hit can easily lead to big damage.

Topping it all off is What A Rush, a fast X-Ray technique that can works as anti-air or links onto the end of a juggle combo for devastating damage. While not incredibly outstanding on its own, this X-Ray serves as icing on the nightmarish cake that is Freddy Krueger’s insanely potent move list.

Even if you don’t agree with his inclusion, Freddy isn’t a fighter to take lightly. He is, literally and figuratively, a nightmare on the battlefield. His mix-up potential, pressure game, and ability to effectively control any distance makes him one of the most effective fighters in the game. Those afraid of facing him online or in Ladder can opt not to download him, or his accompanying compatibility pack, but that will only serve to annoy the folks who choose to play with this incredibly deadly addition to the Mortal Kombat roster. Take your lumps like a champ. Freddy’s coming for you, one way or another.