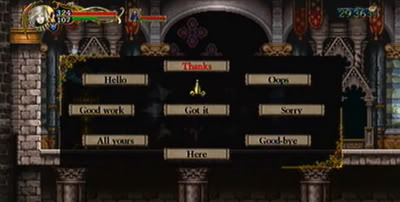 Voice chat is simultaneously the bane and the savior of online gaming.

When used correctly by mature, well-intentioned players, the ability to flexibly communicate can elevate a simple game experience into something fun, coordinated, and socially rewarding. When used incorrectly — which is more often the rule rather than the exception — it does nothing but serve the selfish needs of trolls and armchair generals.

While we shouldn’t forgo voice chat just because a nasally 15-year old sings Britney Spears into our headsets, equally effective ways of communication exist that don’t break immersion. The primary method, and the one I’ve found to be the most effective for casual play, is contextual phrase chat commands. Few games created outside of Japan feature them, but in my opinion, every online game should.

To illustrate how contextual phrases can be used to communicate effectively with other players — for better or worse — I’ve created a likely scenario set in Castlevania: Harmony of Despair, the multiplayer Castlevania title released last summer on Xbox Live Arcade and coming soon to the PlayStation Network. You’ll see through this example how nine simple, pre-generated phrases can allow a team to communicate without breaking immersion and risking language barrier conflicts by resorting to voice chat.

The first part of each quote is the audible American voice clip; the command used to invoke it is listed in brackets. 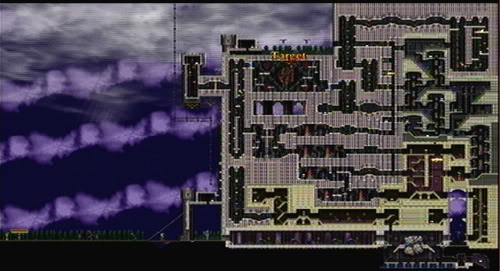 Over 200 runs and still no Sonic Boots. He wants to move quick enough to keep up with other skilled players and get his next piece of loot faster. It’s for this reason that he keeps running Chapter 9, the only place where the fabled footwear drops.

Having no luck with Soma, his main character, our hero has switched to Charlotte, a less physically capable magic user. While she's not as strong as Soma and unable to move through the level as quickly, her smaller equipment pool is actually a boon in this instance. It means her chances of getting the Sonic Boots from Beelzebub, the boss of the level, are quite a bit higher than Soma, who may get any number of things instead due to his status as the favored character of the game.

And so, as Charlotte, he creates a lobby to help expedite the grinding process. Players slowly begin to funnel in. First, a Soma arrives, likely there for his own pair of boots. Next is Shanoa. As soon as she joins, she rapidly begins clicking on her Ready button, flashing the screen with her intentions. It’s not time yet. Finally, after some waiting, another Soma joins. He’s ready to go fairly quickly. Charlotte and Soma 1 ready up, and the game begins.

Charlotte groans. The second Soma doesn’t move from the start of the level. He likely won’t move for some time, if at all. No choice but to carry him through this level and kick him afterwards for being a douche.

As the remaining trio makes its approach to the castle, Charlotte summons a horde of skeletal gunmen. Their bullets sail all the way down into the courtyard, making short work of the castle defenses.

As they near the castle courtyard, Charlotte begins scaling the outer wall. As one of two characters that can’t jump kick, she’s unable to take advantage of a special shortcut that Soma and Shanoa will likely use. Instead, her only way to make it to the boss’s chamber in good time is straight up the wall. This path is a difficult one, filled with spikes and spinning blades. One delay and the small footholds will crumble beneath her wake, ruining the path for the rest of the level.

Charlotte: Sure thing! [Got it]

Charlotte has climbed this wall flawlessly many times, and today is no different. She makes it to the top. Down below, Soma 1 rips through everything in his way with the lightning-quick flashes of his dual Valmanway blades. (That’s why everybody plays as Soma.)

As he reaches the end of the tunnel with Shanoa close behind, Soma uses Yorick, launching a bouncing skull that they can kick off of to reach a hole in the ceiling. From there, a quick path through a breakable wall and a magical mirror places them right next to Charlotte at the top of the fortress.

Now reunited, the trio cuts through the few enemies left along the upper path. They re-enter the castle. Charlotte heads along the top corridor, taking the initiative by volunteering to leap down a long shaft as flamethrowers lick at her sides. Her target is an alcove along the left side that leads to the boss, but it also leads to a switch that will open up the lower corridor so her companions can join her without risking themselves.

Charlotte: Sure thing! [Got it]

She falls. Her timing is just off, and one of the flamethrowers hits her, stunning her as she drops all the way to the bottom of the shaft. Now, she has to work her way around to the other side of the boss room, where she can enter and begin the fight. It will take about a minute to do, so she heads off. Unfortunately, now either Soma 1 or Shanoa will have to attempt the drop, as she failed to open the door for them.

Shanoa's sarcasm is palpable. As Charlotte runs, Shanoa drops down the fiery shaft. She fails as well, comically, and plummets to the bottom. Soma takes his shot, and with the aid of his Medusa Head ability, he’s able to hover easily to the alcove. But instead of making her way around with Charlotte, Shanoa waits at the bottom of the shaft.

Soma opens the door out of habit, though there’s nobody left up top to use it. He’s halfway to the boss room when Shanoa repeats herself.

Soma walks back to the edge of the alcove and dives off. He knows what the lazy Shanoa player wants. He throws out another Yorick, allowing her to kick her way up to the alcove, an option Charlotte didn’t have access to. Shanoa doesn’t say thanks. Soma launches himself back up, and all three enter the boss room at roughly the same time. 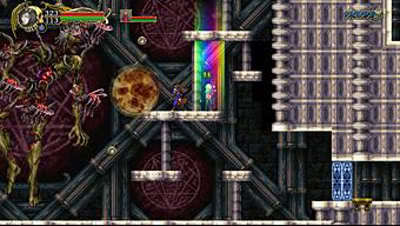 As the Lord of the Flies dangles gruesomely from the meat hooks that keep his decayed body suspended above the floor of his chamber, Soma 1 launches into the air. He hovers in place, his overpowered vacuum blades ripping Beelzebub’s limbs off easily. Shanoa and Charlotte launch their own offensive while dodging Beelzebub’s streams of deadly flies.

Unfortunately, Charlotte miscalculates a double jump and lands in one of the streams. She lets out a death scream as she turns into a simple gravestone. Seconds later, a skeleton with a halo over its head appears in her place.

The death is slightly inconvenient for the party, but it doesn’t matter. The last piece of the Lord of the Flies falls from the ceiling, and Soma drops to the floor, ready to open the golden chest that spawns in Beelzebub’s wake.

Charlotte: This one’s yours. [All yours]

Soma 1 opens the chest. Charlotte is revived.  Every party member receives a piece of loot for his or her troubles. Soma 1 is now the proud and lucky owner of a pair of Sonic Boots. Charlotte gets a Philosopher’s Stone — lucky, but it's not what she was after. She’ll have to run the level again, hopefully without the less helpful players.

Shanoa and Soma 2 both get common items that drop from just about any chapter. It almost rewards their behavior. With the battle won, a lone voice echoes in the empty night just as the screen fades to black.