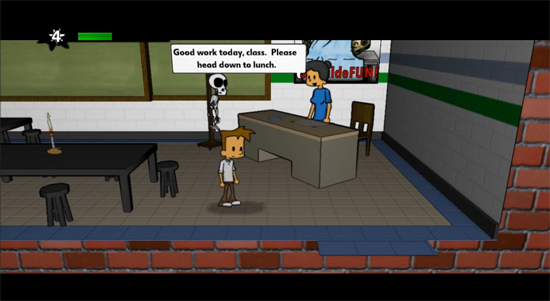 Indie games are hard to classify in terms of genre. The bootstrap method of game design lends itself well to heavy experimentation with established styles; this means that the best way to describe them is often a “blank meets blank” comparison. All the Bad Parts, a recently Xbox Live Indie Game Release from Well Bred Rhino, falls into this category. While it’s billed as an Action Adventure, those trappings are merely a shallow conceit, the borderline minimum for it to be considered a game in the stricter sense. It’s much more accurate to call it a “Silent Hill meets snarky comedy” kind of experience.

All the Bad Parts tells the story of Corbin, a very sarcastic teen who is forced to, as the title suggests, relive all of the worst parts of his life. Beginning in high school with a late homework assignment, Corbin’s journey takes him through love and loss as he tries to make sense of why he’s being forced into this journey of dim memories. Along the way, various anthromorphic insects and vermin will stand in Corbin’s way, cryptically taunting his lack of awareness and beating on him with their fists. 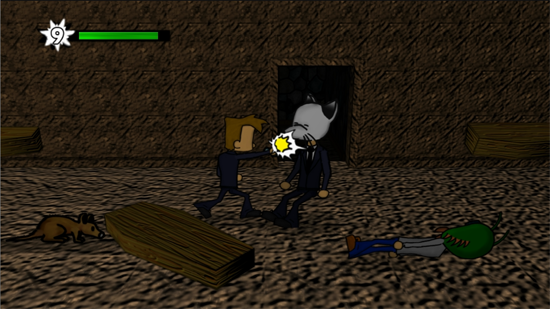 Modeled after classic side-scrolling brawlers, the combat in All the Bad Parts is probably most deserving of the game’s title. While serviceable and necessary, fighting enemies is rarely an engaging experience. Punches hit enemies. Blocks stop punches. Kicks break blocks. Nothing really stops kicks besides their poor range, though, meaning that most situations can be solved by either blocking and countering with a combo, or launching repeated flying kicks. Enemies pushed into a corner can be easily wailed on until they die, and with the vertical hit detection being what it is, it’s not uncommon to scoop up a group of enemies with a single uppercut.

That’s assuming, of course, that the player can land those hits. Whether a tacit argument about the futility of fighting in general, or simply a casualty of the design, the various strikes in Corbin’s arsenal feel very light and ineffective. The aforementioned short range of Corbin’s kicks is almost laughable, and between his flailing and shoving, chances to feel like an empowered fighter are few and far between. 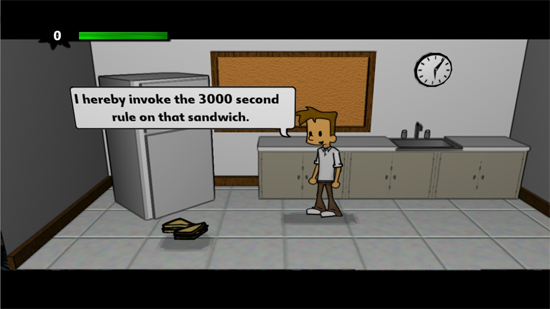 However unsatisfying it may be, the combat isn’t the point of playing through All the Bad Parts. Though the writing often goes to great lengths to be funny, succeeding only half the time, there is a very personal story being told here once all of the deliberate humor is stripped away. Through subtle choices made during key NPC interactions, players can change the outcome of the story, arriving at multiple endings that offer varying degrees of closure. Watching the world bend around Corbin is very reminiscent of the paradigm shifts that take place in Silent Hill, and if the game had a more appropriate tone and less of a focus on showing off the designer’s comedic chops with on-the-nose dialogue, it might have been something truly memorable.

As it stands, All the Bad Parts is competent, but only because the branching story paths are interesting enough to encourage multiple playthroughs. The game part of the game isn’t very rewarding, but as an art house experience with a relatable story, All the Bad Parts entertains. It’s worth trundling through the combat a few times, making use of loaded saves and the Easy difficulty to see the different endings, if only to see what Well Bred Rhino has accomplished in terms of interactive narrative. Here’s hoping their sophomore effort can offer a bit more meat and polish to the actual gameplay.