Drive safely.  It seems so simple and yet if ever I needed a reminder between video games and reality, this warning should not be taken lightly.  It really hit home when I drove in to work this morning after a single night, half a night even, with the game and I went to shift gears.  The problem?  I drive an automatic. 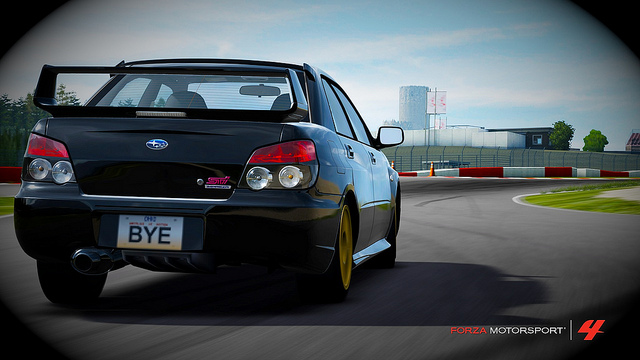 And so the driving career is once again underway.  A closer inspection of my initial Forza forum post betrays a time stamp past 2:30 in the morning.  And even then, I wanted to delve deeper into the game.  The weird thing is that in many ways, the game at this point seems to feel very similar to the previous iteration.  There appears to be tweaks to the career mode but in essence, there are events and you race in them.  The bells and whistles for car lovers are here.  The insane amount of details to tweaking and upgrading, capturing the cars' appearance inside and out, the paint editor.  All make return appearances.  It is what you would expect from Forza.

Of course, Forza 4 has taken the community aspect of gaming a step further.  Turn 10 fostered its online community in Forza 3 with its website and free DLC.  It appears that all signs point to such continued commitment.  Car clubs (i.e., clans) appear to have increased import and interaction even within the game itself.  Poking about, I saw the ability to use cars in a shared club garage, a car club message system, and just a general place to aggregate members and members' stats.  It is impressive and while not revolutionary, it makes you wonder why more games do not do it.

However, while all of these things are nice, extended play value ultimately comes down to how it feels to drive and like the Forzas before it, Forza 4 does not disappoint.  Even using my regular controller, the translation between what I see on screen and what I feel and what I expect to feel are so awesome, the connection so deep.  I understand that it's a game, but it feels real.  I remember thinking that way when I first played SSX, feeling the Six-Axis rumble while carving a turn.  My hands feel that as I fear the tires' rubber won't grip like it should in Forza.

That in-grained connection is was what made me reach for my shifter today though I have driven an automatic for ten months now.  It is what makes me miss my Subaru and think about the best driving line through my neighborhood's S-turns.  Drive safely.  I will, but I won't be happy about it.