Tokyo Beat Down is an eye-catching beat-em-up vehicle whose gas tank, unfortunately, is running off the fumes of its charm alone. The art, sound and localization direction are gleefully self-aware while creating an intoxicating tongue-in-cheek parody of Japanese cop dramas. It’s definitely enough to push players like myself, who are suckers for great content direction, towards the finish line. What makes the trip painfully dull, however, is a gameplay system that feels like it was designed on a wet bar napkin 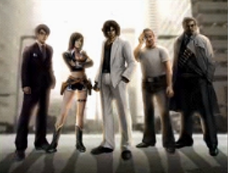 On that scrap of ratty paper towel pulp, stained by the glass ring of a cheap Manhattan, were likely these words: side-step, grab opponent, throw body into other enemies, dash towards grounded bodies, repeat. That’s the Tokyo Beat Down strategy guide for just about every encounter in the game. Not counting the incredibly monotonous stage where you beat up stationary crates looking for clues (granted, that level is being sarcastic by design, but the joke hangs out there too long).  The nap inducing dashing and grabbing to victory wouldn’t be so bad if there was an entertaining reason to dive into the combo system. Stretching my count as liberally as possible, I’m in danger of using one and a half hands to count all the possible attack strings. Combos are determined off of varying presses of the punch and kick buttons separately. Not combos that require pushing punch and kick buttons at the same. No varying directional inputs + kick or punch. No jumping into kick or punch moves. No kick and punch strings into throw or special.  Nothing but just hitting two buttons at varying times. Even collecting scrolls, which unlock moves and other combos, don’t really add very much to the system. The whole thing doesn’t cut it for 2009. In fact, it barely cuts it for 1989. 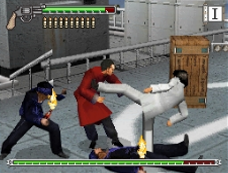 If the fighting system were 1989 standards, then the stage design is stuck in 1984. If the environment art wasn’t there, I’d have a very difficult time telling one level that requires walking from left to right to the other level that required walking from left to right. Blocking your quest towards the right side of the screen is a clone factory of the same handful, and by handful I am being generous, enemies carrying the same five or so different weapons. Even with what variety there is with the weapons to mix things up, they all bend over and get plowed by the same side-step-grab strategy.

This leaves the gameplay to become nothing more than a digression to the narrative. The over-the-top story of a rag tag, tough as nails, punch faces first ask questions last, down with the Tokyo streets police squad story is entertaining in its constant winking and nudging at the audience. The attention to detail in creating an exploitation of a Japanese cop drama is admirable, especially in the great illustration work. If you’re a fan of any Japanese cop and robbers films from the 70’s to the 90’s, you’ll definitely appreciate the intentional caricatures and sarcasm oozing from the localization. It’s unfortunate that this is the strongest part of the game. 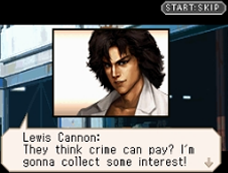 Having the intentionally weaker half of the game wind up being the strongest creates a horribly paced experience. Success, the developers of Tokyo Beat Down, should have sat down with a copy of Yakuza and had a serious note taking session. Both games have an extremely similar premise where two elements on paper seem like an awkward pairing, but actually play off each other very well in execution. With Yakuza, you have a good crime narrative that is occasionally interrupted by great beat-em-up gameplay. In turn the great beat-em-up gameplay is occasionally interrupted by a good crime narrative. They are worlds apart at first, to the point of jarring, but together hold up a great experience. With Tokyo Beat Down, the narrative is an excuse for the gameplay, but the gameplay is weak. So the two elements swap positions. That’s all bad.