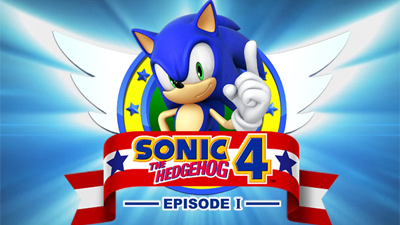 Creating a modern sequel to a popular classic series can be like a death defying tight rope act. If the designer leans too far towards innovation, he risks toppling into a hive of jaded hardcore fans. Thousands of them lurking forums and comment sections, typing angrily about how the latest title failed to spark whatever vague notion of mojo that nostalgia has fooled them into thinking exists. If the designer leans too far to the other side of the rope by ctrl-c’ing the same formula, he risks making the hive think they’ve just been duped into buying the same game twice. Or even worse, has unintentionally exposed a classic game design as being stale compared to other modern games. Sega is definitely very experienced at walking this line and when it comes to Sonic, they tend to belly flop into the grand stands. This is why Sonic 4 is a welcome surprise, as someone at Sonic Team has finally discovered how to maintain a good balance between sticking to what was great with the old, while sprinkling just the right amount of new ideas on top. 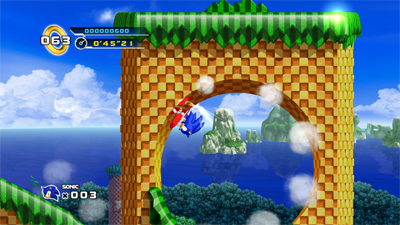 The old in question is a mini-remix of the original Sonic: The Hedgehog’s environments, basic gameplay philosophy and art/sound direction. The mojo sauce that some fans tend to vaguely complain about being missing, typically the reason for tagging a game “not being Sonic-like enough”, is most definitely present in 4. The secret mixture of mayo and ketchup in this case is clever level design that allows for the player to choose between slow and steady platforming or reckless and quick speed. A few instances of bottle-necking aside, most environments in Sonic 4 are designed to offer a compelling option for both styles of play. It’s what kept the original 3 titles replayable on that trusty little black Sega box during the 90’s and was definitely what kept me re-launching 4 well after beating the game.

Complementing that gameplay philosophy is a grip of very well designed environments. All of Sonic 4’s zones maintain a great sense of gameplay identity that separates themselves from each other, yet still maintain the game’s universal “exploration or speed” options. Splash Hills Zone, for example, is a wide open and care-free design. Speed inducing tracks that push Sonic’s progression right as much as possible are flanked by little pockets of platforming and exploration. Casino City Zone, inspired by Spring Yard Zone, takes Slash Hill’s philosophy and turns it vertical. Steep half-pipes that lead into pits filled with pinball bumpers, flippers and plungers offer entertaining speed and exploration options at the price of hindering progress towards the finish line. Probably the most entertaining zone, Lost Labyrinth, is where the design team really flexes their muscles. Sonic is put into a much more claustrophobic ancient ruins setting where the option selection of play style is slightly more limited, but your ability to adjust and play both styles is required. One moment you’re taking your time trying to solve dynamite or lantern based puzzle, then in another section you’re outrunning Indiana Jones inspired boulders and navigating runaway mining cars. There’s also a throw back to the original Labyrinth zones with the water fall puzzles and crushing wall traps contrasting the slow panic of progressing towards air pockets in the underwater levels. 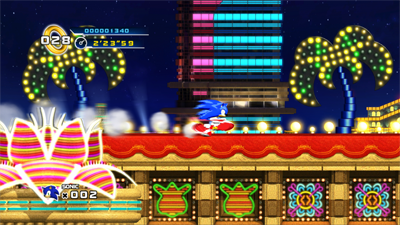 There’s a lot of love poured into these level designs, which makes Sonic 4’s major mis-steps in control heartbreaking. Sonic’s overall lack of reaction to directional inputs from standing still is awkwardly slow. Either Sonic has too many frames of animation when turning around and jumping from idle or something is up with the system controlling his momentum when standing still. His lack of reacting quickly to basic commands at one point had me wondering if my controller was having input lag. The worst part of the muddy controls is getting Sonic to top speed run from idle, which feels like he is sloshing his way through half-dried concrete. Once up to top speed, you run into the other glaring issue of maintaining momentum. Even during Splash Hills Zone, which contains some of the easiest and most natural speed inducing tracks in the game, keeping Sonic moving quickly can become awkward. Balling up to maintain or gain speed once at full run actually slows him down. Hitting loops and trying to keep momentum going with directional inputs just confuses the game and screeches Sonic into a dead stop, often dropping him prematurely off of the loop. Not touching any directional inputs during loops is a crap shoot as to whether you’ve built up enough speed to make it through. Even if you do, completing loops in this game slows Sonic down (!?!?)! If you aren’t creating speed via spring pads or baseball pitch machines, you’re fighting an uphill battle. 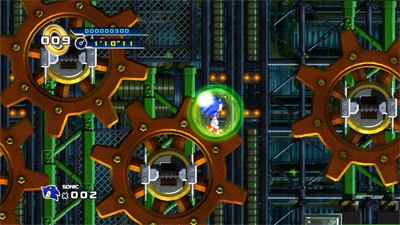 Unintentionally tasked at helping build up speed is a new auto targeting system and double dash control mechanic. If you’re in mid-air and facing an enemy, destructible item or spring pad within range – Sonic will target one of these items. Hitting the jump button while locked on will send Sonic crashing into his target. If no target is selected, pressing jump and a direction in mid-air performs a quick horizontal dash. Both can act as good momentum builders when the traditional control avenues fail and in the case of the air dash, can come in handy as air brakes in the few situations where you need to slow down ASAP (boss battles especially).

There is a lot of clever stuff going on here, some of it brand new and most of it mined out of inspiration for the original. The control issues, however, are something only the most forgiving Sonic fans…or those most in denial…will work through in order to see the brilliant stuff. When the next episode is in the development pipeline, Sega needs to address and tweak those control issues, because this one could have been something worthy of a high pedestal. One that was at least within shouting distance of the one Sonic CD is standing on, instead, 4 is just a tragic downloadable oddity of the series — cursed to fly low under the radar.