Lost: Via Domus isn’t that bad. It’s not great, but some levels are fun and there’s enough in it to appeal to fans of the show. The cave level of episode 3, however, is stupid, annoying and badly designed.

You control Elliot, an amnesia-suffering photographer and survivor of the fateful Flight 815 crash.  After some hours of messing about on the beach and being confused, you make your way to a cave.

The level begins in a forest. You walk towards a bridge, perhaps picking up some delicious papaya on the way. Ahead, John Locke waits for you at the cave entrance. You approach and, unfortunately, have to engage him in conversation.

Oh John, what have Ubisoft done to you?

John Locke, like Shaft, is a complicated man. In the TV show at least. The game designers, presumably looking for a shorthand way to convey the wisdom of Locke, thought “Let’s have him quote some writers and philosophers, no matter the situation”.  So you’re like “Why are you making me go into this cave?” and John is like “Joseph Campbell once said ‘a man goes into the dark to find the light”” (or whatever). Sadly, a ‘punch John Locke’ option does not exist.

Then it’s bartering time. Locke is the one making you go through this treacherous cave for no clear reason, but he won’t let you go without at least some torches. For a price. “Give me your food and water and I will give you torches that only last a few minutes and may be barely enough to stop you from dying”, John kind of says. You trade some stuff and enter the cave. The keen reader may have noticed I didn’t mention a checkpoint here.  That may be important later.

Soon as you enter the cave – cut scene. You see Lisa, the girlfriend you can’t really remember. Is she real, or an apparition? Of course she’s an apparition. Would any real girlfriend say “Chase me, chase me through this treacherous cave with its smoke monster and dozens of holes to fall down and bats and death”? Ubisoft want you to think that this is the kind of thing women do.

It soon gets dark and you light your torch. You’ll die without it. The smoke monster is in these caves, and will only rip you to pieces if it’s dark. You know, like in the show. Actually, no, completely different than in the show. You make your way through, as waterfalls and bats extinguish your flame. Light it again quick, or here comes smokey death. If you do die, you don’t even get to enjoy a death scene; all you get is darkness and a message “You died in the dark”.  What a dull way to go. And if Smokey doesn’t get you, the holes might. The cave is littered with them. Get caught looking the wrong way, or not paying attention, and you’re down a hole, deader than Elvis.

Death by smoke monster is annoying, as you try frantically to relight the torch, while Elliot decides to take his sweet time.  Death by hole is similarly frustrating.  But neither is as irritating as what happens when you restart. 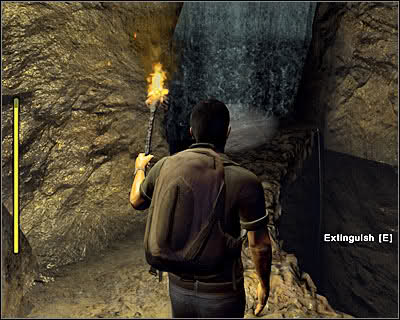 Remember earlier, when I mentioned the delicious papaya, before you realised just how boring this article was going to be? We’re right back there again. Via Domus doesn’t even have the decency to let you save any closer to the cave. So, again you have to cross the bridge, again you collect the goddam papaya (to trade). And once again, you have to speak to this one-dimensional John Locke.

In itself, this isn’t really a major fault, it takes two minutes to get caught up again. But if you die numerous times in those bloody caves, as I did, you’ll soon curse repeating that two minutes. Collect fruit, run across bridge, press to talk to Locke, press to ignore Locke, ten different button presses to buy torches, move into cave, watch cut scene again. On and on and on. This would’ve been as easy thing for Ubisoft to fix, making the game much less frustrating. But Ubisoft like to make you suffer. Ubisoft made John Locke rubbish. Ubisoft hate you and want you to cry.   Ubisoft kick babies.