Street Fighter X Tekken is a dream come true for fighting-game fans: They’ll be able to play as warriors from the two most-popular franchises in the genre, create crazy tag combos, and get a power boost for taking two fireballs in the face. SFXT's newest feature is the Gem System, where you can equip your tag team with benefits like an attack boost or auto-blocking that activate if you complete certain conditions. This mechanic is similar to adding accessories to a Final Fantasy character or using perks in Call of Duty, and entries like Dragonball Z: Budokai and modes like Soul Calibur’s Weapon Master have tinkered with it.

The difference, however, is that Capcom wants tournaments to use SFXT’s gems, and you can’t disable them at all. Before, only a patch could change the basic attributes of each combatant, and you could exploit your opponent’s bad habits to get a win. Now, you could have to face a faster Dhalsim or use an anti-throw gem to mask one of your weaknesses.

I don’t like this kind of customization and share the concerns that Shoryuken.com’s Keits has with the system, but I also understand how some people could enjoy it. The audience who wants a Gem System-based game might not be the same as the audience who wants a crossover between the two most-respected names in the genre. Why do gems need to be in Street Fighter X Tekken when they would make more sense in a completely new fighting game?

Over the past few months, developer Capcom had created an identity for SFXT. It combines Street Fighter’s 2D gameplay with the juggle strings of Tekken and a dash of the team-up techniques from Tekken Tag Tournament. When the game was at E3, Capcom touted that it didn’t have a "comeback mechanic" likeStreet Fighter 4’s Ultra Combos or Marvel vs. Capcom 3’s X-Factor that annoyed some veterans.

In contrast, the Gem System doesn’t have much to do with either franchise. Worse, it will be nearly impossible to balance over 100 power-ups along with a huge roster and hundreds of team combinations. When I think of SFXT, I want to strategize about space control and team synergy, not worry about whether I should give Julia Chang an attack boost that turns on after doing a three-hit combo. Capcom probably should have introduced the mechanic much earlier in its promotion schedule, but rather than adding gems to SFXT, the system should have its own Petri dish to grow in. 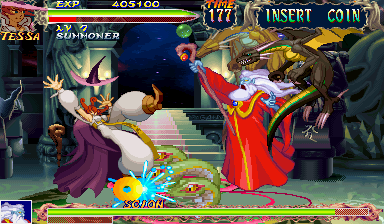 In the '90s, Capcom created as many new series as it did Street Fighter sequels. Not all of these games were classics, but they did play with unique ideas. For example, the obscure Red Earth is a brawler that focused on single-player boss fights rather than multiplayer. It had characters who leveled up the more you played and a unique fantasy theme with beast men, witches, dinosaurs, and harpies.

The game was a flop in arcades because it was too focused on single-player, but it laid some groundwork for an environment where customization would thrive. Imagine a mode that teaches you how to play through unique boss fights. Then you could take your knowledge and your beefed-up warrior into Verses Mode. The game's cast could be smaller, but you would have more options to make your hero unique. For instance, some items could cost more gem slots to use but grant an ability like parrying or combo-breaking.

A gem-based fighter could have been a new franchise for a different kind of player. It should appeal to those who grew up on trading-card games (a cited inspiration for the Gem System) and online role-playing games — people who love to create something unique. Capcom can facilitate multiplayer by creating a robust online mode with limited lag and allow people to use an offline-verses-only password so that they can access their character even if their friends didn't unlock everything. If this system is a such revolutionary feature, then I say go for broke.

That game wouldn’t sell itself like SFXT does, but Capcom is an expert at generating hype with flashy reveal videos and a steady stream of information leading up to release. It would definitely be a risk worth taking.