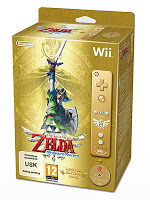 I can't even remember the last time I played my Wii. If I remember correctly I was playing Donkey Kong Returns last November. It's sad. I see it everyday in my living room collecting dust. It saddens me to think that I could have traded in my Wii a year ago and not even missed it. The Legend of Zelda: Skyward Sword is the only reason why I haven't traded in my Wii.

I've come close to trading in my Wii on many different occasions. The first time I almost traded it in, I decided to trade in my Gamecube peripherals instead. They included Super Mario Sunshine, Legend of Zelda: Wind Waker, a Gamecube memory card, and a Gamecube Controller. I got $20 from my friend Simon at Patriot Games, and put gas in my car.

I came really close to selling my Wii the other day. I was strapped for cash and needed gas to get to school. I began to get the cords together when I noticed my one and only Wiimote sitting by itself. I then thought of the Special Edition of The Legend of Zelda: Skyward Sword.

"Doesn't that include a Wiimote?" I thought to myself.

I began to do my research. Not only does the Special Edition of Skyward Sword include a gold covered Wiimote, the Wiimote has the Wii Motion Plus built into it. I then found out that the Wii Motion Plus is required to play Skyward Sword. I've had my Wiimote since 2007. It doesn't have any of bells and whistles that newer Wiimote's have. My Wiimote was officially obsolete. I grabbed my Wiimote and an extra nunchuck I've had laying around and traded both in for $15 dollars at Patriot Games. To the Gas station.

As the holidays approach, the first thing on my Christmas List is the Special Edition of The Legend of Zelda: Skyward Sword. It's $79.99 which is the same price as if you bought the game and a Wiimote separately, but you're Wiimote wouldn't look as cool as the one that comes in the special edition. The Legend of Zelda: Skyward Sword is my final game for my Wii before I trade it in. It's going to be nice to be able to play it with a new controller.