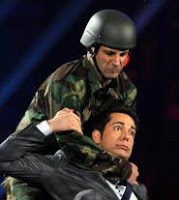 A great awards show begins with a great host, and Zachary Levi was just that. His Portal 2 leap across the venue was a great entrance, and the guy knew what he was talking about. That's a huge step up from last years host, Neil Patrick Harris, who was cool, but I couldn't really relate to the him as a gamer. Zacahry Levi was funny as well. His joke about him and Jane Lynch being sexy male hosts had me laughing. He also kept the show moving. I wouldn't mind if he came back to host the Video Game Awards again. 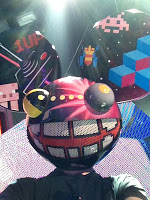 The VGA's made a bunch of additions to the show this year that rocked. One of the additions was an in house DJ by the name of Deadmau5. Deadmau5 was also the in house DJ at the 2010 MTV Video Music Awards, so he's already official when it comes to rocking awards shows. I know a bunch of people tuned in just to see Deadmau5 perform. 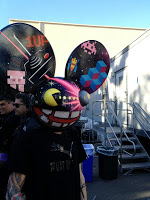 Of course on television his epic music and light shows kept getting cut short thanks to commercials, but he did his thing. Deadmau5 also introduced a new helmet which is way more detailed than the one he had on at the VMA's. The new helmet is cool because it has a bunch of videogame designs on it. The Right Eye is Pac Man and I see a 1UP logo on his right ear. Very appropriate for the occassion.

Remember the people who presented at last years Video Game Awards? I thought not. This year we saw a bunch of famous faces present awards, trailers, and musical guests. The guys from that show Workaholics were hilarious when they presented the trailer to Alan Wake. They came out as if they won an award and went on to introduce Alan Wake 2. By the way they were presenting the trailer it wasn't clear if they knew the game they were presenting or not adding to the humor.

What about Charlie sheen presenting? That was definitely a highlight of the night. Say what you want about Charlie Sheen, that man is winning. Gotta give kudos to Will I Am and Hulk Hogan. The special guests that attended this years show makes me want to go to next years VGA's. I'd get to mingle with some stars for real. 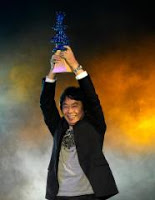 Despite all of the recent controversy around rumors of Miyamoto is retiring, it was good to see him on stage smiling. Something tells me this isn't the last time we'll see Miyamoto accepting a Hall of Fame award. I give it 3 years tops before Mario makes his way into the Hall of Fame. The Videogame Hall of Fame is a genius award within itself. I look forward to seeing what game get inducted next.

You know those award shows where the person who wins give a really long acceptance speech? The VGA's aren't one of them. Gone are the days of people thanking everyone from GOD to the cleaning lady at their hotel. If you take too long at the VGA's you risk getting teabagged by a US Soldier.

I thought the host was joking when he said if you take too long accepting your award you'll get teabagged. That was until the guys at Infinity Ward set off the alarm for going too long on their acceptance speech for Best Shooter. Next thing you know the soldiers on the stage Teabagging one of the guys from Modern Warfare 3. How's that for a win. You've got the best selling game of the year, the award for best shooter, and you got teabagged on stage. I look forward to the day I get to accept a VGA. The only thing I'll have on my mind is avoiding getting teabagged. Until next year.