Diablo's Deckard Cain is one of my favorite names in gaming. It feels perfect for an old, wise mage with an affinity for identifying items, but I had no idea that Blizzard named this iconic character after a real person. Yup, it turns out that Deckard Cain the Elder got his moniker from the result of an interesting contest that was recently brought to life by the man himself, Deckard Cain Elder, on Reddit.

"My name is Deckard Cain Elder, and I am 16 years old. When I was just a baby, Blizzard had a surprise drawing for Diablo with very vague details. All anyone knew was that if they wanted to be a part of the drawing, they had to send a postcard to Blizzard with your name on it, and after a said date, they would pick a card at random to win the prize. Being a very big Blizzard fan, my father decided to take part in this." 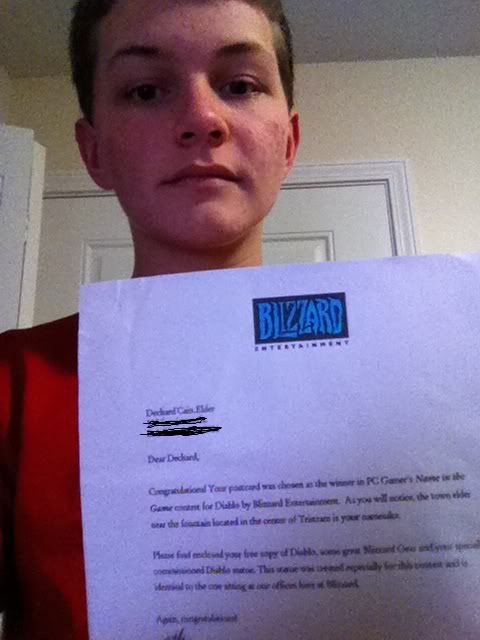 A few months later, Deckard's father received a bunch of Blizzard and Diablo swag in the mail, including a message from Diablo's producer, Bill Roper, explaining that they used his son's name for a character in the game. Deckard even has photos to verify his story, like the above shot of him holding the letter from Roper.

I'd say that's some pretty cool trivia. Now, how do I get a Diablo 3 character named Mike Minotti?