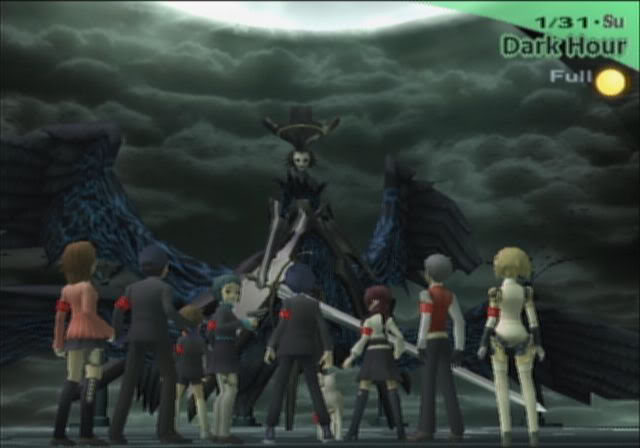 Many role-playing games undertake dramatic plot twists, but most never delve into complicated psychological motives and religious ideas. Persona 3: FES takes these concepts to extremes in The Answer, an epilogue to the original storyline.

In the original version of Persona 3, the anonymous main character fell into a deep sleep after defeating the final boss, Nyx. However, the vague ending left many questions unanswered. What happened to the protagonist after he fell asleep? Did the entire high school team of shadow eliminators stay together?

The Answer literally turned the ending on its head by revealing that main character died. Thankfully, the storyline does not fall into a depressing tragedy. Instead, the high school friends get trapped in their own dormitory building. The cyborg in the group, Aegis, discovers a powerful, psychotic robot who claims to be her sister. 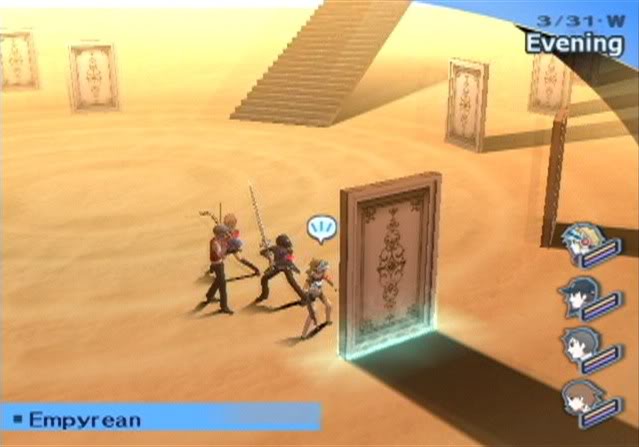 The plot turns fishy as Aegis and her friends discover a huge Desert of Doors in the basement. Although The Answer follows a boring succession of dungeons, each door reveals a unique memory from each character. The party slowly discovers that these are all the moments when they each awakened their Persona abilities.

Sadly, Aegis's flashback shows her in a dark empty void, with only the voice of the nameless Persona 3 protagonist guiding her. After a boss fight with a shadow, each of party member receives a key. Only one person can open the front door of the dorm to either save the nameless main character's life, or to escape from the dorm without changing anything.

Thankfully, Aegis's sister, Metis, changes the entire outcome of this end game. She reveals to Aegis that she when she awoke, she only heard the voice of her sister. She was all alone, like Aegis when she first awoke. After comforting her robot friend and winning the battle royale, Aegis makes the brave decision to open a secret door in the desert in the basement. According to her, this door will allow them to discover what really happened in the final battle against Nyx.

Upon opening the door, Aegis and her friends soon learn that the main character was trying to seal off a massive apocalypse. Everyone who lost hope was wishing for Nyx to destroy the world. In the strangest cutscene, the mysterious main character points his finger out to Nyx and then literally transforms his body in the form of a cross.

That's right–the epilogue of Persona 3 becomes a humongous Christian metaphor. Aegis and her friends then decide to take the final stand to defeat the accumulated sinful desires of Earth in the form of a gigantic black beast. In spite of all the grandiose imagery, The Answer leaves many questions unanswered. Is this all still a dream in an alternate reality? Was this main hero truly intended to represent a Christ-like entity?

Whatever the case, Atlus, the developer of the game, probably wouldn't give us any definitive answers even if we tried. The important part is that Aegis finally frees herself from her pre-programmed role as a cyborg. The mysterious narrator figure of Persona 3, Igor, reveals that Metis was actually the violent robotic side of Aegis's persona. After a strange ending of separation anxiety, Aegis finally gains her own individual identity as a real girl.

I have to admit that Aegis's body is still in the form of a robot. However, perhaps the metallic matter of Aegis is just a state of mind. Perhaps the developer wanted to free ourselves from the sole perception of games as an outlet for our negative emotions. Rather than presenting characters performing stereotypical heroic tasks, Atlus decided to question the existential boundaries of the medium in itself.

Although people may dispute the context of using Christian symbolism in such a manner, Persona 3 FES is still one of the more ambitious storytelling projects in video game history. The big question is whether Atlus is willing break any more boundaries in its future projects. Regardless of how they plan their games in the future, I will always appreciate the company for how it tries to push narrative limits to challenging new levels.

What other games have tried controversial mind trips in Christian symbolism? Why do you think certain epilogues and alternate stories gain more acceptance than others? Where should RPGs progress in the future generations of game systems?