I hate my character in Skyrim.

My Khajiit is a slack-jawed douche that runs around ruining everyone’s life because he was given instructions to do so. 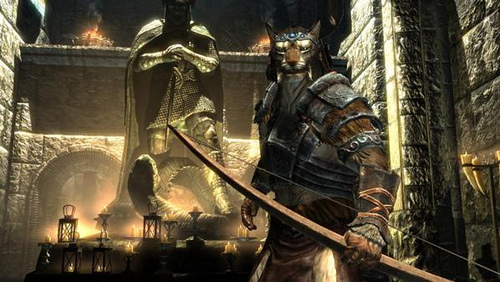 Seriously, he should be ashamed of himself.

Despite all this talk that you can do whatever you want in this grand world, I feel stunted and at the mercy of any number of organizations. My character has no agenda and makes no decisions. Like a child, he just does what he’s told.

For me, a role-playing game is about stepping into the shoes of a character and going through the emotions of being this person in this world. It means taking control of my character’s destiny and growing alongside them. In this regard, Skyrim is a complete failure.

Using a carefully structured open-world storyline, Rocksteady pulled the player into the role of Bruce Wayne better than most games that let you customize every aspect of your character.

The Elder Scrolls franchise has always struggled to maintain a solid narrative. For some reason though, people give Skyrim a free pass when it comes to having a completely forgettable narrative. The world is on the line, yet there’s no drama or urgency.

Under-pressure decisions are what round out a character and make them believable. I have a laundry list of repetitive quests in Skyrim, but as far as decisions go, I can either complete the missions or turn my Xbox off. In Fallout 3 (which was developed by the same studio as The Elder Scrolls series), I was given the choice to blow-up a town or eliminate the person that offered me the job. That made the story special and had a clear effect on the world I inhabited.

Is there a legitimate reason not to kill everyone the Dark Brotherhood assigns you to assassinate? Should I care that following the orders of the Thieves Guild makes me a bad person? Should I even bother with this whole “destiny” crap? In the world of Skyrim, not really.

On the other hand, Arkham City has a wonderful ebb and flow between its free-roaming elements and the exciting main storyline. Realizing the importance of the narrative and the natural reaction to an open environment, Rocksteady restricts the player from some side quests by requiring the use of equipment gained from the regular missions. Encountering a challenge you’re unable to complete gives you even more reason to progress further in the plot. 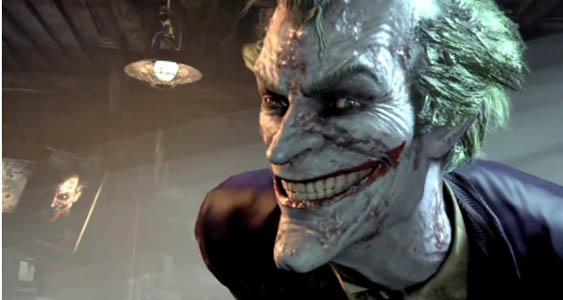 Besides, why wouldn't you want to see his pretty face again?

A well-told story implemented seamlessly is only part of bringing a character and world to life. The best way to engross a player is through the fundamental storytelling device exclusive to video games: gameplay.

Rocksteady ironed out a lot of the issues from Arkham Asylum, but not a lot needed to be done to the stealth sections and the smooth-as-butter combat. With a few tweaks here and there, these two crucial sections return better than ever — which is great since they’re the ultimate reason Arkham City is a better RPG than Skyrim.

When I string together a 40-hit multiplier against a handful of thugs, three knife-wielding psychos, and a Titan, I feel something. When I perch myself on top of a gargoyle statue and execute a flawless plan to eliminate my enemies silently, I feel like Batman. Walking into a heavily-guarded room in Arkham City holds more possibilities than the whole of Skyrim.

An especially simple-yet-effective design decision brought over from Arkham Asylum comes in the form of a heart-rate monitor for each criminal. Being able to track the sanity of the enemies as their situation becomes more desperate reinforces the idea that this is reverse survival-horror and brings you closer to the role of the Dark Knight.

The problem with Skyrim is that it holds no surprises, and though you can get away with that in some franchises, The Elder Scrolls series relies on hiding how deep it truly is. The story didn’t matter very much in The Elder Scrolls 4: Oblivion because the world was so new and discovering its secrets and possibilities was enthralling. The reason most people put up with the awful combat mechanics in The Elder Scrolls 3: Morrowind was because there was nothing like it at the time. I could care less that Kvatch was burning and Dagoth Ur was chilling in some volcano. 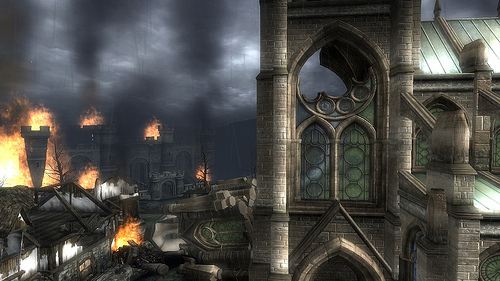 Hey, your town will still be burning in like, 60 hours, right? Alright, I'll be back.

Bethesda has tried to recreate the feeling of discovery from Morrowind and Oblivion, but the developer should stop trying to recreate a feeling and start trying to simply produce it from scratch. Skyrim is such a safe game, which is rare for a series that broke so far from RPG norms.

Identifying with a video-game protagonist isn’t as easy as letting the player customize their character and setting them free in an open-world environment. Creating a believable world takes time, smart structuring, and subtle design mechanics. Unfortunately, I can’t find any of these qualities in Skyrim.

I don’t want to be a Khajiit reinforcing my own stereotype by being a slave/prostitute to just about anyone in Skyrim. I want to be Batman.