For the past few weeks, The Legend of Zelda: Skyward Sword had me doing things that no other video game has. It had me standing for 90% of a 45+ hour adventure because it was more compelling than sitting down. It taught me how to read my enemies’ behaviors, and to reconsider the meaningfulness of my sword (which, in terms of combat and puzzle-solving effectiveness, doesn’t change in a significant way throughout the majority of the game) more often than occasionally reminding me about all the other classic Zelda tools also at my disposal. By the end, it had me convinced that I was a significantly better swordsman than when I first gripped the blade referenced in its subtitle.

Every new idea requires a good explanation, but many of Skyward Sword’s best got away without needing any. Without hand-holding exposition nor repetitive tutorials, the newest execution of the series draws attention to how its design sensibilities were subtle enough to have more than one user in mind. Though by contrast, they also draw attention to every moment that thought otherwise, leaning on a tradition of variety when it least needed to. As I watch the first Zelda in half a decade struggling to soar to the top of most critics’ 2011 Game of the Year lists, deep down inside I think I know why.

Better design, in any form or media, exists for the sake of more effectively communicating something that matters, to those it should matter to. Mostly everything about the swordplay is a stellar example of good design being applied to Link’s agency within the world; it conveys the idea of swordsmanship, and your sword as a multi-purpose tool, better than any previous Zelda. What the sword affords its wielder is more diverse, intuitive, and immediately applicable because its trajectory is no longer restrained to the binary inputs of buttons and/or “waggle”.

The tutorial is succinct, well placed, and manages to teach you every way the sword could be handled throughout the entire game–literally, besides the Skyward Strike (and your own creativity at times), it covers every thing. Slicing through splintered training logs provides an analog for how you’ll behave outside of the Knight’s Hall. It treats you like an eager student who cares to learn more–and just when things start to get fun, it sends you on your way. It humbled me to realize that it would actually take practice, as swinging a sword really ought to, but I could forgive momentary simulation in such an exaggerated experience because it surprised me with an appetite for empowerment. Landing a hit never felt so “up-to-me”, puzzles are more cleverly solved by opening doors with the sword as a gestural key, and obstacles can now approach us at angles we literally couldn’t reach before. Just as a sword is an extension of our arm, Link has become a truer extension of ourselves. 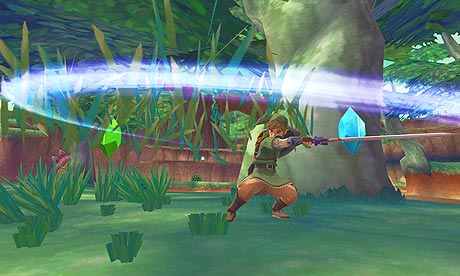 Skyward Sword begins to break down an environment where often-criticized predictability flourishes by also giving the combat some much needed depth, and a healthy potential for error that can register with the player. There’s more fluidity and intelligence in the behavior of enemies as they react to Link’s (your) gestures, making them more believable, threatening, and annoying–and thus, that much more satisfying upon defeat. In a series defined by the inability to miss your target by locking on to it, and guides telling you where to go and what to do next every few minutes, this was the first time in a long time that I felt legitimately challenged to push myself in a Zelda game.

Yet it’s filled with interactive elements that haven’t developed nearly as much as the sword, or in some cases have actually become more cumbersome. Swimming seems to borrow from the same control scheme flight does, but it doesn’t feel as natural. Scooping up potions, water and fairies with an empty bottle doesn’t happen with simple gestures, oddly enough, breaking consistency with a similar action: scooping up bugs with the incredibly gestural bug net. Aiming cursor-based items (the hookshot, the bow, etc.) requires more calibration than Twilight Princess ever did without Wii Motion Plus. Not only is there a lack of consistency with how you interact with the world, but the larger environment of Skyward Sword is not entirely seamless with itself as a world (which is what I’ll be tackling next in this series).

I wouldn’t say these were deal-breakers for my experience with Skyward Sword, but I believe they’re worth thinking about when it comes to how important The Legend of Zelda is to the history of modern game design. These are the symptoms of mingling forward-thinking designs with homage-paying artifacts that matter most to longtime Zelda fans (including myself), perhaps only because their very presence game after game has extended their relevance. At the same time it’s also a game filled with things that’d only matter to players who have no idea what they’re doing nor where they ought to be going: people who’ve obviously never played a Zelda game in their life. There’s a conflict in design philosophies going on here, which I can only assume stems from the realities of a rapidly diverging audience on the Wii. Meanwhile, the sword mechanics struggle to remain at center stage more than they ought to–it’s as if the captivating lead role in a play was written out of scenes that weren’t essential to developing the story anyways.

When I think about the most thrilling and engaging moments for me in Skyward Sword, they all have two things in common: a sword and a shield. It’s too bad that the world itself doesn’t share in this delight as consistently–because when it does, it makes me wonder why it didn’t for the whole adventure. In my next entry to this mini-series, I’ll begin going over those points, starting with Link’s environment: Skyloft, and the surface below.