As someone who’s been gaming for well over three decades, I’ve accumulated more than my fair share of clutter. For example, my “shrine of cellophane” (aka the mountainous stacks of unopened games I have in my collection) has become the stuff of legend. I own enough plastic musical instruments to start several bands. I have so many light guns that the federal government should have me on a watch list. I still have in my possession a fully functional R.O.B. the Robot and a Magnavox Odyssey 2 for crying out loud.

I’m not ashamed of most of the peripherals I’ve collected over the years — not the unopened Taiko Drum Master kit or the still-in-the-box Donkey Konga bongos, nor the barely used Dreamcast keyboard or the imported GameCube keyboard/controller hybrid (that thing made playing Phantasy Star Online so much better…). I’ve made my peace with the collection of plastic guitars I have to cart around every time I move, and while I never use it, the idea of parting with my Nuby universal Soul Calibur 2 fighting stick makes me sad beyond words. That being said, there is one peripheral that I own that fills me with embarassment every time I see the box or hear it come up in conversation. It’s the one thing I’ve bought in over 30 years of video gaming that I still look at and ask myself, “What were you thinking?” That peripheral is my Steel Battalion controller.

The Steel Battalion controller is the Hummer of video-game peripherals — overpriced, ostentatious, and, well, kind of pointless. At least the Hummer is sort of useful for driving around town, which puts it one point ahead of this monstrous mechanism — which has no use at all outside of two games.

It’s easy to figure out why gamers lusted after this thing when developer Capcom released it back in late 2002. Iit’s the mech equivalent of a racing game’s steering wheel on steroids, complete with the foot pedals and about a bazillion other useless doodads. If there’s one things gamers seem to love, it’s mechs, and the thought of piloting a giant steel engine of destruction with a gas pedal, gear shift, and two joysticks inspired many a nerdgasm back in the early part of the decade.

My own initial reaction to Steel Battalion was mild interest. The controller was cool, and the game that came with it sounded like the kind of “hardcore” mech simulation that could make for a compelling experience. The problem was the price: Steel Battalion’s retail cost was $200. For that you got the controller and the game, but it certainly created a daunting barrier to entry for the casual and curious masses. I wound up passing on the experience — mainly because I’m the rare breed of gamer who isn’t all that interested in mechs.

I was OK with that decision. Sure, occasionally my pride would speak up and say “you have a really nice game collection — but it’s too bad you don’t have Steel Battalion to take it to the next level.” Like all the voices in my head, I’d simply push it aside and go about my day. Besides, the thing sold out and it wasn’t like Capcom was filling the supply chain with more units. Then, the unthinkable happened….

Capcom decided to re-release the game and the controller (albeit with some cheaper parts) a few years later. I took this as a sign — a grand, shining beacon all but screaming that I was really meant to own Steel Battalion, and this was my second chance at righting one of the great wrongs of my life. I rushed out to plunk down the cash on a pre-order (with my wife’s blessing, no less!) and then settled back to wait, secure in the knowledge that my game collection would no longer be good — it would be great. Soon I would be the envy of all my friends and colleagues, who would come to marvel at the magnificence of this game and its gargantuan controller. There would be mech slaughter at Casa de Bracken, and it would be glorious.

And then I got it.

The first thing one notices about Steel Battalion is that the controller is huge. It comes in pieces and requires some relatively simple assembly, but no one really understands how massive this thing is until they see it in person. That’s awesome, except that it gives rise to the first problem all new Steel Battalion owners must confront: Where the hell am I going to put this thing? If the marketing guys at Capcom were really clever (and a little bit devious), they’d have not only sold this controller but a custom-designed table to put it on. I know I would have immediately trekked back to my local GameStop and bought one if such a thing existed. 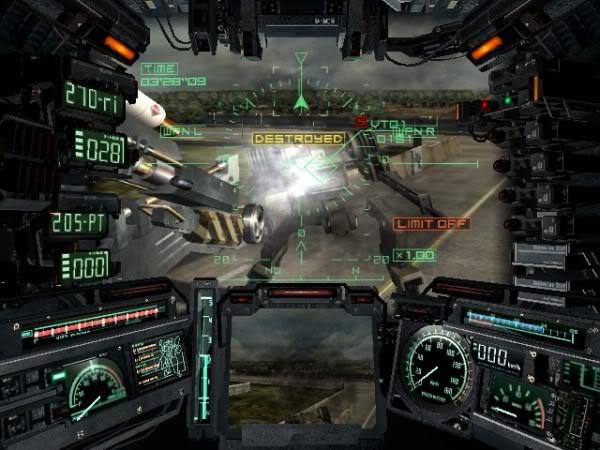 Since that wasn’t an option, I was left to finagle a temporary solution. I grabbed a standing TV tray only to discover that the controller’s base was really too big to sit there safely. I had to grab a second one, and side by side they managed to contain this monstrosity. Of course, this solution created two other problems — with the trays and their legs next to each other, there were no good place to put the gas and brake pedals. That was a big one. Even bigger was that the trays were too tall to use while sitting on the couch. They were a good height for the simple feat of eating, but for piloting a mech? Not so much.

After some creative juggling, I finally had the thing set up in a way where I could at least play (hurray for adjustable-height computer chairs). I fired up the Xbox and prepared for battle.

If the first thing one notices about the controller is how huge it is, the first thing they notice about the actual game is the difficulty. Yes, the idea of a full mech control panel sounds fantastic on paper. Give me flashing buttons! Give me foot pedals! Let me move with one joystick and aim with another! The reality was that playing Steel Battalion was arguably not unlike piloting a genuine war mech, and anyone given that honor by some futuristic sci-fi military would have to go through extensive training before they were turned loose with a multimillion-dollar piece of heavy weaponry. Steel Battalion offers players a half-hearted tutorial before unleashing them into battle.

I’m all for learning by doing, but Steel Battalion wasn’t a game where failure resulted in a game over screen followed by an option to retry the mission. Failing to eject when prompted resulted in permanent death and a wiping of the saved-game file. In the era of constant checkpoints and games that held players’ hands through the tough bits, this was brutal. So brutal that I tried the first few missions, died, and then promptly quit playing.

“I’ll definitely master this once I get a better set-up for this controller,” I told everyone who’d listen. I don’t know if they believed me or not, but several months later Steel Battalion’s mech cockpit finished its slow migration from the center of the living room to an out-of-sight closet. It resided there until I moved back to Florida three years ago. It now lives in another closet — or at least it did until today.

Revisiting Steel Battalion hasn’t changed my opinion of it one bit. It’s still the coolest — in theory –peripheral I’ve ever owned, but it can’t overcome its myriad problems. The simple act of starting the mech is far more complicated than turning on my car. The controller has roughly 40 buttons, switches, and gizmos and requires genuine coordination on the player’s part. In some ways, I think of it like playing the piano — players have to be able to work both hands and their feet all at the same time. I’m almost 40 years old. I’m lucky if I can walk and carry a conversation at this stage of my life.

The controller is every bit as huge as I remembered, and it doesn’t feel as though it was really designed for being assembled and disassembled multiple times. Today marks the third time I’ve put the thing together, and it’s certainly showing signs of wear. Even more troubling is that the “Buffer Material” toggle switch has broken off somewhere along the line. Fortunately it doesn’t appear to be one of the really important ones, but for a $200 controller that was treated with care by an adult and used for a grand total of four hours in its entire lifespan, it probably shouldn’t have pieces breaking off.

As for the game itself, it’s aged well enough. Steel Battalion is still hard, and I have no real clue what I’m doing. Most missions end with me either toppling my own mech or flailing around like a madman trying to figure out what gear the mech should be in and what buttons I should be using while getting blasted by enemies. The game deserves a lot of respect for creating what appears to be a reasonable facsimile of what piloting a mech in combat would be like (right down to the stress of battle). It’s just not particularly fun because it’s so complicated and the learning curve feels very steep.

Looking back, I can say I’ve learned some important lessons from my time with Steel Battalion. The first is don’t plunk down $200 for a peripheral that can only be used for one game. Yes, there was a sequel (that I never bought), but even two games doesn’t justify the price tag. The second is to trust my instincts — I passed on this thing the first time around and should have known better when it was re-released. Yes, it looks awesome — but looks aren’t everything. I also learned that if a company releases an expensive peripheral, sells out of them, then waits two years before releasing more that means they’re probably not really interested in supporting it for the long haul.

All that being said, the single most important lesson is this: If you don’t really like mechs, don’t buy a gigantic controller for a video game about driving mechs. Seems like sage advice to live by for sure. I only wish the younger me had realized it.